Audio - Doctor Who: The Last 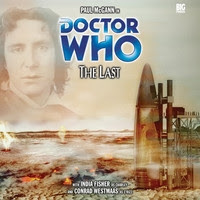 Our Doctor Who audio expert, Tony Cross, delves into the back catalogue available from the Big Finish website. Today is the Eighth Doctor adventure The Last...


Interestingly - in the loosest sense of the word naturally - I listened to the end of Part 2 and all of Part 3 of this story whilst at The Oval watching England play South Africa, which was an odd experience. In front of me white clad men whacked a little red ball around rather monotonously in the sunshine whilst my ears were filled with the howling winds of a war ravaged and dying planet. Indeed somewhere about three-quarters of the way through Part 3 Tim Bresnan took England's only wicket of the day.

Part 4 I listened to on a Thameside bench with a view of the Palace of Westminster and the London Eye.

Altogether a rather strange way to enjoy a Big Finish audio but fun.

But enough of this what about The Last. The Doctor, K'rizz and Charley arrive in the inhospitable wastes of a planet falling apart. There has been a terrible war. A war to end all wars. This one has been successful. It killed almost everyone. It's an interesting tactic.

However in a bunker a small number of survivors, including Excelsior (Carolyn Jones) the leader of Bortresoye and saviour of her people as well as Minister Voss (Ian Brooker) and Minister Tralfinial (Robert Hines). Excelsior it becomes rapidly clear is as mad as a hatter. So loony tunes she makes The Master look sane. She is being kept from the knowledge that there is no one left. There are no survivors. Everyone is dead and - as we gradually discover - everyone must die.

The Doctor, Charley and K'rizz get split up following a collapse in the building that they are sheltering in. Charley is paralysed from the neck downwards. Something she seems to take with astonishing good grace, even if she does hold out no hope of recovery. K'rizz meanwhile encounters Requiem (Tom Eastwood), a survivor. Perhaps the only survivor.

It's all downhill from there for the TARDIS crew. Death, more death and then - just when you least expect it - more death. The Last does have a certain quality of bleakness about it but then what can one expect of a story involving the deaths of millions in a firey holocaust.

There's also a story in here about the Gaia principal taken to the extreme.

I think this is a pretty average Big Finish story, erring towards the less than good. The acting is fine but I think it is too didactic - if that word means what I think it means Vicini. It feels like taking a hammer to a very crumbly nut. Yes, war is bad. Boo-hoo. We know that. We've always known that. The Daleks back in 1963 showed us that in a bizarrely similar post-holocaust environment. I know this doesn't get said very often but this story makes Terry Nation look subtle.

The ending both makes sense - based on what has gone before - but also feels like a drastic cop out. A happy solution to an unhappy tale. Or is it?

Because again we have questions to be answered. What's The Kro'ka up to? Who is behind these mysterious zones and why does he/she/it seem intent on putting the Doctor through the ringer? Will everyone live happily ever after? Hints have been dropped. Seeds have been sown.

Somewhere, sometime Big Finish will tell us everything and I hope it is all worth it.