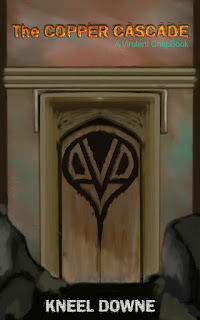 Nate McKenzie catches the VirulentBlurb as he reads The Copper Cascade, out now from Kneel Downe...

Fools search for power by the removal of Masks

Within the confines of The Copper Cascade, a congregation of Freaks adorn cells. Straddled with devices that limit their unnatural powers, even the people keeping a watchful eye know that it's all a guise. These would-be heroes, this Vengeful Squad, are locked up, in faux protection, only because one of their kind allows it. And only he, Dark Deliverance, knows the truth. The truth about where they come from, their captors' deepest fears and the truth about why they have come to be there.

Manufactured weapons of darkness, unsuitable for our task. Cut free to become a diversion, a sideshow, to divert the blind from the sickness that was growing beneath the surface. The WAR...

In Kneel Downe's Copper Cascade, much of the narrative surrounds conversations within Dark Deliverance's own mind, as you're allowed access to his keen perception and musings on the world outside of his cell. His conversations with his sort-of-foe, Detective Lobo are a central driving force for providing context. But Kneel expertly fills in back story and exposition without making you feel as if you're reading a thesis on the minds of heroes and villains. One of the most deceptively intriguing qualities of The Copper Cascade is that you aren't sure who is hero and who is villain. Once that realization hits you, a veritable Pandora's Box of questions opens in your mind. How do you side in the battle of Good vs Evil if you're not sure which is which?

The Copper Cascade challenges your perception of the world from which it derives; but moreover, it challenges perception of your own world. Your disbelief in a thing, an idea, does not negate someone else's belief in it:

"Tell me, are you battling magic, Wolf?”

"I don’t believe in that Voodoo shit Deliverance, you know that!”

He laughs. Fuck me, the fucker laughs.

"Indeed I do Detective, indeed I do. But what if your killer does? What then?"

Kneel Downe's ability to build a world inside the mind is astounding. Reading Cascade gives one the distinct impression of reading a vibrant comic or playing an expansive RPG (perhaps while on drugs), yet, his medium is black and white. It's almost kaleidoscopic. Although it can be a bit hard to follow at first, that is often the case when reading the work of a brilliant writer. Kneel writes for the sake of the story not for the sake of the reader, telling the story that desires to be told; the story, alive, sentient, as if it is sharing itself through the click-clack fingers of a being controlled by the words themselves.

Kneel's writing is a combination of the caustic edge of Transmetropolitan, the intimidating and bewildering entanglement of a Mark Z. Danielewski novel and the subversive malice of a Kubrick thriller. All of which, fermented, becomes an elixir that entices and then addles the mind before revealing its truth.

Even in the chapbook style, scaled down and easily digestible, The Copper Cascade is vast, beautifully imaginative and soul-quenchingly dark - in all the best ways.