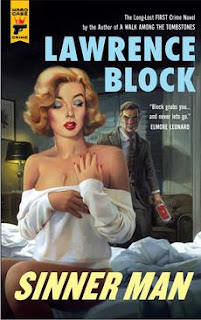 Susan Omand heads for the murderous streets of New York  and reads Sinner Man by Lawrence Block, thanks to Titan Books...

As a lover of pulp fiction crime novels, I am ashamed to say that I had never read any of Lawrence Block’s novels before picking this one up, no not even A Walk Among the Tombstones for which he is so famous. However, that will now change having read Sinner Man, his “lost” first story.

To escape punishment for a murder he didn’t mean to commit, insurance man Don Barshter has to take on a new identity: Nathaniel Crowley, ferocious up-and-comer in the New York mob. But can he find safety in the skin of another man…a worse man...a sinner man...?

What a great read! This has everything that a great pulp novel should have – interesting characters, cinematic locations and lots of fast action and tough violence. It is a book very much “of its time” with the protagonists fighting hard and drinking harder, no account taken of political correctness and the government rules and regulations we have come to accept in modern times being very conspicuous by their absence, but this story is all the better for it. The whole premise of the plot, of an ordinary man being able to “disappear” to avoid police and take on another identity so easily, just would not be practical in this day and age. Instead, this is a look back into another time when you could just pick up a social security card and open a bank account without all the rigorous checking now needed.

And it is this concept of assuming a new identity, so different from his original one, that makes the character of Don Barshter/Nat Crowley so interesting. Especially for a first novel, although I know there have been revisions, Block’s central character is incredibly well written. At no point does the reader question the character's decisions or have to make a leap of faith to accept his actions as being anything other than how an insurance man pretending to be a mobster would react. His interactions with the warring bosses and other characters within the mob food chain are fascinating and the tension and excitement that he feels, both for the situations they put him in and for his own fear of being found out, is palpable.

The story behind the story is also very interesting and well summed up in a new afterword included in the book by the author, explaining about the search for his “lost” novel, published under a different title and a fake name and then forgotten about for 50 years. However, for me, the original book stands up well enough on its own not to need this added information. If you love the noir style of 1950s/60s crime novels, full of action, great characters and a highly satisfying conclusion, lose yourself for a few hours in the back streets of the New York mob and get to know Nat Crowley as he gets to know himself.