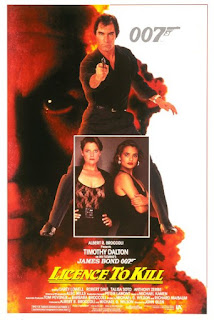 It's nearly Christmas so there's bound to be a James Bond film on TV somewhere. This week, we're looking back at Stuart Mulrain and Barnaby Eaton-Jones' series of articles on the 007 films. Here, Stuart Mulrain has a Licence To Kill...


“In my line of business you prepare for the unexpected!”

I’m going to be upfront and honest right here. I’m a Timothy Dalton fan. Not one of those Johnny-Come-Lately Dalton fans who have rediscovered him on the back of Daniel Craig’s Bond, I’ve been a Dalton fan since I first saw this film. I should also point out that this is also my favourite Bond film. That’s not to say it’s the best, but it is definitely the Bond film I’ve seen the most.

Dalton is pitch-perfect this time, giving us the cold and dangerous James Bond that fans of the books have always wanted to see. There are elements of it in the early Connery films, but never to the extent that we are given here. It’s not enough for Bond to simply get revenge; he needs to witness those he is after suffering. Dalton brings new depth to the character through his performance, showing a subtle distain for what Bond does and the actions he is responsible for. Unlike Bonds that came before and (with the exception of Daniel Craig) after, there are no quips or glib remarks after Bond makes a kill or witnesses an enemy die. It’s probably a fair statement to say that this film doesn’t glorify Bond or make you want to be him. Bond is made to suffer in this film and we are made to feel his every loss.

This film has often been criticised for its lack of humour, and it’s certainly fair to say that there is very little humour in Bond himself (but given what has happened to his best friends, you wouldn’t expect much). Where the humour does come is in the form of Desmond Llewelyn, who clearly has a great time with his expanded role (and relatively grounded gadgets) as Q. There is an interesting dynamic that comes from putting Llewelyn with a younger Bond, a sort of grumpy but loveable uncle (alongside M’s tough-but-fair father figure). He has genuine chemistry with Bond and there is a fondness between the two that hasn’t really been explored before.

It’s a shame that there was never any consistency in the casting of Felix Lieter in the same way there was with other regular characters in the Bond films. Given what happens to the character in this film, having a regular actor in the role would’ve brought it home even more. It’s a nice touch then that they at least bring back David Hedison to the role he previously played in Live & Let Die (the book of which the Leiter story arc in this film comes from). Hedison is arguably one of the best of the actors to have played the part and he adds a familiarity to the part that long term fans can invest a little more in than if he was played by another new actor again.

For his fifth and final appearance in the role of M, Robert Brown shines in a small, but significant scene between himself and Dalton, shot at Hemmingway’s House. Brown is often overlooked when people talk about M (which is understandable given he is sandwiched between Bernard Lee and Judi Dench) but this is a great scene that reminds you he was a worthy successor to the role. His other (forgettable) scene in this film is a brief one with Miss Moneypenny, who is again sidelined and given nothing more to do than be doe-eyed and concerned for Bond. It would’ve been nice to see what spark (if any) Caroline Bliss could’ve brought to the character had she been given more to do in her two turns in the role, but instead she remains forgettable at best and little more than a footnote in the characters history.

Fortunately in Carey Lowell we have one of the strongest and best Bond girls of the series. There is a spark to her character that, fittingly, has not really been seen since Diana Rigg in On Her Majesty’s Secret Service. There have been strong Bond girls since, but they have all eventually fallen into the damsel in distress role, waiting to be saved by Bond. There is none of that with Lowell’s Pam Bouvier and she is very much an asset to Bond; he very much needing her more than she does him. Lowell is great in the role and deserves to be remembered as one of the best Bond girls.

On the other hand Talisa Soto’s Lupe is very much the damsel in distress and fills the role well, taking her strength from being a victim who doesn’t need rescuing in the traditional sense of a Bond girl. Lupe is a kind of redux of the Maud Adams character from The Man With The Golden Gun, rounding out the role and perfecting it. There’s a harsh reality about her need to be rescued by Bond and freed from the possessive and abusive relationship she has with bad guy Franz Sanchez. There is no time wasted in setting up their relationship, with the film opening on Sanchez taking her back from the man she is sleeping with.

This scene introduces Sanchez to the world in a truly memorable and terrifying way, giving him the classically chilling line “What did he promise you? His heart? Give her his heart!” Sanchez is a classic Bond villain put smack-bang in the middle of a Miami Vice era world. He has no plan to hold the world to ransom or reshape it in a design of his own choosing; he is simply looking to run his drug operation without interference from the law. The genius of the character is in the casting of Robert Davi. Like Dalton, Davi has a ruthless charm that very much makes him the mirror of Bond, A complete bastard of a villain that is strangely charming and likeable in a truly terrifying way! In Davi’s hands the character easily deserves to be ranked among the best of the Bond villains.

Rounding out the bad guys is Anthony Zerbe’s smarmy Milton Krest, a character who soon becomes out of his depth once Bond is brought into his world, using him as the foundation of his plan to bring down Sanchez’s organisation. On the other side of the coin you have Benicio Del Toro’s psychotic Dario, a coked up henchman with a passion for murder and mutilation. Both Zerbe and Del Toro play their parts well, but Del Toro is the standout of the two and it’s clear to see why he went on to find the success that he did. It’s interesting that given the part they play in the murder and mutilation of Bond’s friends, neither of these characters meet their end at Bond’s hand (although Bond sets their deaths in motion and is around to witness both).

Of all of the Bond films, Licence To Kill is probably the closest to the books in both tone and the portrayal of Bond himself. Interestingly this is the first of the Bond films not to be based on an Ian Fleming novel (it takes elements from the Live & Let Die novel and a character from The Hildebrand Rarity short story) and that’s one of its major strengths, freeing up Richard Maibaum and Michael G. Wilson to find inspiration from elsewhere.

What they give us is a smart revenge movie with a heavy influence from old samurai movies (the hero who beats the bad guys by destroying his organisation from the inside). Bond isn’t just out to avenge Felix and his new bride Della; he is also still seeking revenge for the death of his own wife by projecting it on to his friends. This is the film Diamonds Are Forever should’ve been and could’ve been had it not misfired its tone completely. Like the tagline on the teaser poster for this film declared; “His bad side is a dangerous place to be!”

This is still a Bond film from the era in which the director was simply hired to bring Cubby Broccoli’s vision to the screen. That said, this is easily John Glen’s best film (Bond and beyond) and you can see why it is his own favourite. The film looks stunning and features some great Bond set pieces throughout, from the pre-credits scene (again an inspiration for Christopher Nolan, this time for The Dark Knight Rises), to the underwater fight, to the final truck chase along a mountain road.

With John Barry having now left the series, the baton is passed to Michael Kamen, whose electric guitar-heavy, Latin-inspired themes fit well with the film and era without dating it. This is a great score and probably one of the best non-Barry scores of the series, at least until David Arnold came onto the scene. When Kamen’s take on the Bond theme kicks in during the helicopter scene at the beginning, the hairs on the back of my neck still stand on end. The film also boasts one of the best and most traditional sounding theme songs, with Gladys Knight making a worthy addition to the Shirley Bassey school of big Bond themes, belting out the title song with a gusto and passion that was missing in a-ha’s and Duran Duran’s pop-heavy themes.

This is a Bond film that has retrospectively found its audience, most of them off of the back of the Daniel Craig entries in the series, but it really is a shame that it didn’t perform as well as a Bond movie should’ve at the cinema. But then it was released in a summer that boasted the huge competition in the form of Lethal Weapon 2, Indiana Jones And The Last Crusade and Batman. It’s no coincidence that when Bond returned, he had a regular Christmas release slot.

It’s ironic that just a Bond was getting interesting again, he was forced into hiatus by legal problems and you can’t help but wonder where Dalton and Bond would’ve gone next (or how different Dalton’s place in the franchise might have been had he been given one more outing in the role). As it stands, this film has an odd feeling of being a nice conclusion to the series (as it seemed like it might be for a long time) with Bond finally putting the ghost of Tracy di Vicenzo to rest and possibly having walked away from the life he had begun to lose his taste for.

But then as every fan knows, James Bond will return...