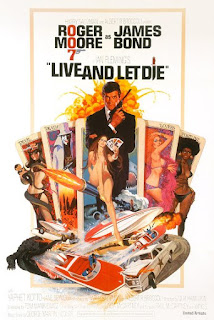 It's nearly Christmas so there's bound to be a James Bond film on TV somewhere. This week, we're looking back at Stuart Mulrain and Barnaby Eaton-Jones' series of articles on the 007 films. Here, Barnaby Eaton-Jones remembers Live And Let Die...


“There's no sense going out half-cocked!”

When the 007 novels were nudging the film industry for a cinematic adaptation, Ian Fleming wanted David Niven to play James Bond. He also wanted Cary Grant too, though Grant would only commit for one film. In casting Roger Moore, he got both and it’s a shame he wasn’t still alive to see this realised. Mind you, the Bond films were by now veering so far away from Fleming’s books that he wouldn’t have recognised what he saw on screen. Ian Fleming’s James Bond is not a light comedian who can act serious when he feels like it. His choices seem wide of the mark for a man who wrote the character but you wonder whether this is how he saw himself; especially as Bond was clearly based on his own wartime experiences and extravagant lifestyle. With the departure of Sean Connery, the producers of Live And Let Die went to the opposite end of the spectrum for his replacement. They’d made the mistake of trying to clone Connery with the casting of George Lazenby, so now they cast someone who had his own unique style to bring to the franchise. The Moore, the merrier; if you’ll excuse the pun.

In casting Roger Moore as 007, the world was denied a second series of The Persuaders, where the Moore and Tony Curtis double-act of Lord Brett Sinclair and Danny Wilde sparred, joked and improvised their way through a gloriously irreverent and witty action/adventure series (a personal favourite of mine) but it was role he had been earmarked for since making a worldwide success of The Saint on television. So, in a sense, they got a ready-made fanbase for their new incarnation of the man with the licence to kill. When I was young, he was my Bond. The James Bond I grew up with. Watching this film with the eyes of a reviewer, it’s evident almost straight away that Moore is too old for the part already, even though he’s slimmed down and had his hair cut short since his role as Lord Brett Sinclair. He’s 45 and, although incredibly youthful-looking, his ageing is an issue over the films that were to come (finishing with A View To A Kill when he was 58). However, his tenure starts off well and, oddly, veers away from the template of Diamonds Are Forever (which is a film that could easily have starred him, due to its reliance on humour and a self-parody). Live And Let Die is very close to the tone of Dr. No and one wonders if that was a deliberate act to almost begin again with the Bond franchise. The marrying of the supernatural and Jamaican island culture, with a liberal helping of ‘fish out of water’ scenarios with our titular hero, even has a direct link via the role of Quarrel Jnr (the son of the boat-owning character Quarrel, from the debut 007 film) and with the main villain being a ‘Dr’ too. The main difference is that of the plot, which concerns the overused idea of drug trafficking (a central conceit in rather too many ‘70s films), rather than a megalomaniac wanting to take over the world.

The dated feel of the film comes from its intentional aping of the ‘blaxploitation’ genre of the ‘70s and, although the majority of the characters are played by black actors and actresses, it’s a shame that they’re also mostly criminals and hoodlums. Yaphett Kotto, playing the dual role of Dr Kananga and Mr Big, has a real screen presence and two distinct personalities which comes from casting a heavyweight actor in the role. Contrasting him, but with equal screen presence, is Geoffrey Holder as Baron Samedi (inspired by a popular Voodoo figure of the same name) who’s everlasting image sat on the front of a speeding train at the end of the movie is etched into cinematic history. It’s funny, bizarre, ambiguous and unnerving in equal measures. Rounding out the trio is Julius Harris as Tee Hee Johnson, the right-hand man (or should we say the metal-hand man) at the side of Mr Big. His final confrontation with Bond, aboard a train at the end of the film, provides the template for the more successful Jaws fight in The Spy Who Loved Me; both of whom get their comeuppance by way of their metal additions to their anatomy.

Jane Seymour, in only her second major movie role, exudes grace, class and naivety in her role as the fortune-telling Solitaire, whose power to foresee the future is stripped away when she loses her virginity. There’s an uncomfortable feeling of deceit when 007 seduces Solitaire and takes away what gives her the identity she has and, if this was a Fleming novel, it would match the cold, callous, get-the-job-done character of 007. But, this isn’t the character we’re seeing on screen, so Moore’s predilection for the jokey plays against what could have been a powerful moment. In the movie, this just feels unintentionally cruel and makes you feel empathy for Solitaire rather than rooting for 007.

Oddly, my favourite moment in the movie is such a tiny one that encapsulates all that Roger Moore brings to the role. He walks into a bar filled with black patrons, in a blazer and chinos, and the jive-talking and street-language of the ‘70s tapers off as 007 merely says “Good afternoon!” in plumy English tones. The juxtaposition of the two is funny and also character-forming. Although, it has to be said, that Roger Moore plays the role more hard-edged and physical than you expect if you’re looking for the excesses of The Spy Who Loved Me and Moonraker.

George Martin, producer of The Beatles (to name merely one of his successes), provides the soundtrack here and it seems an odd departure from the safe hands of John Barry but it works brilliantly. He brings a modern sensibility to the score, whilst not departing too far from the template that Barry has set. The title song, by Paul McCartney and Wings, is a no slow, epic ballad either. It’s a full-on reggae-rock number, which is used to great effect throughout the film, and continues to be a staple closing number of McCartney’s concerts today. The only criticism of Martin’s score is that there isn’t enough of it! There are a few silent sojourns, particularly in the spectacular speedboat chase, where music would have helped build up the action and tension more.

The thrust of the story revolves around several chases, some more serious than others. The aforementioned speedboat chase would be the highlight (that honour goes to the Double Decker Bus getaway), had it not been for the inclusion of Sheriff J. W. Pepper, played with tobacco-chewing buffoonery by Clifton James; who’s redneck stereotype of a character appears to be lifted straight from the successful Smokey And The Bandit franchise. His inclusion really seems to divide Bond fans straight down the middle. Myself, I found it amusing when I was young and impressionable. Now, I’m old and cynical, I just find it an off-kilter way of attempting to provide a ‘comic relief’ role in a film that didn’t need one. The fact he was deemed worthy of another outing in The Man With The Golden Gun makes you wonder whether the Broccoli and Saltzman producing team were going to make him into a Felix Leiter type recurring role. Talking of Leiter, we get probably the definitive portrayal of the character by David Hedison, who just oozes CIA class. Until Daniel Craig took over the 007 role, every single film had a different actor playing Felix Leiter – Bond’s American ally, who is a sort of cross between M and 007 – apart from when it came to David Hedison. He returned in Licence To Kill and made the role his own again. It is a real shame, considering there is a real ‘team’ feeling during the Moore era, that Hedison wasn’t kept on as Leiter throughout. Oddly, talking of the ‘team’, Live And Let Die marks the only film (aside from Dr. No) that doesn’t feature Desmond Llewellyn as Q, until his untimely death in 1999 robbed us of his appearance in the 40th anniversary celebration (or abomination, depending on your views of the film) that was Die Another Day. His absence is keenly felt, especially as the first scene of Bond in his London flat would have been enlivened by Q appearing at the door, alongside the regulars of M and Miss Moneypenny (who pay Bond a visit, to brief him on the mission). Apparently, the TV series he was appearing in at the time specifically wrote him out for three episodes in order for him to appear in Live And Let Die, so it’s a mystery as to why he wasn’t included.

There’s an abundance of scenes from Live And Let Die which would find their way into any clip montage of Bond’s finest moments but the marooning on the feeding post in a crocodile farm, where he escapes by using them as stepping stones, is probably the most well remembered. The stunt itself was performed by the owner of the farm, Ross Kananga, and – as a thank you - his name was used for that of the main villain. Which, if you think about it, is a strange sort of ‘thank you’!

So, in a world of drug-trafficking, where a corrupt Caribbean Dictator also masquerades as a Harlem Drug Baron, Voodoo wraps its magic around the story and a new actor sits incredibly comfortably in the role of 007 that he changes to make his own, Live And Let Die is a genuinely different type of entry into the Bond franchise. It harks back to the start of the Connery era, hints at the Moore era to come, and showcases the decade it came from. It’s also a rollicking good adventure, with great direction by Guy Hamilton (providing a classy pair of hands behind the camera, with Goldfinger and Diamonds Are Forever already under his assured directorial style), and serves as a real showstopper of a debut for a new James Bond. This isn’t James Bond of the Ian Fleming books. This is James Bond of the movies. If you can differentiate the two, then Roger Moore is the right man for the job.