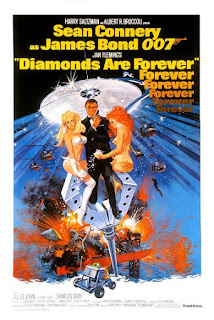 It's nearly Christmas so there's bound to be a James Bond film on TV somewhere. This week, we're looking back at Stuart Mulrain and Barnaby Eaton-Jones' series of articles on the 007 films. Here, Barnaby Eaton-Jones remembers Diamonds Are Forever...


“Well, he certainly left with his tails between his legs!”

Diamonds Are Forever is the linking film between ‘60s era Connery and ‘70s/’80s era Moore and conveniently forgets that George Lazenby ever existed. It has all the hallmarks of what went before and what was to come. In a speedy pre-title sequence, James Bond is searching for Blofeld (with no reference to the death of 007’s wife in On Her Majesty’s Secret Service; it almost feels like you are jumping from You Only Live Twice to this movie, where 007 is out to find the evil genius who evaded capture from the exploding volcano). This search takes him across the globe, via just three people. Surely, if he was this easy to find, Blofeld would have been killed long ago?! Again, Blofeld has changed his face into that of Charles Gray, who is the most ineffectual and camp Blofeld of the lot, with added hair! With relative ease, Blofeld is dispatched before the main theme visuals kick in, allowing for a possible new villain to take his place.

Sean Connery was wooed back to the role of 007, as a one-off, with a deal that allowed him to greenlight two films he wanted to get made (of which, only one actually did – the gritty and disturbing The Offence, which is probably Connery’s finest and most angry acting performance), as well as being given a large fee that Connery donated to a charity he set up in Scotland. The supposed ‘flop’ of On Her Majesty’s Secret Service was anything but; though with George Lazenby acting on advice to leave the role behind and a box office that was ordinary rather than extraordinary, the team of Broccoli and Saltzman obviously felt that they needed the return of the original 007 to bridge the gap between his first successor and his second successor. Lazenby was offered the role again but backed out, which meant various other actors were briefly considered before Connery was lured back to shore up the franchise (one of those actors auditioned was Batman’s Adam West and, oddly, if you watch the film with this in mind you can quite easily see him playing 007 in this style of Bond film).

A lot of people seem to look unfavourably on Diamonds Are Forever, as well as Connery’s portrayal of 007 within it. For me, it’s one of my favourite Bond films, if not my favourite. Connery, with a four year absence from the role, may look older but he’s so much more comfortable with the role because of it. He’s not out of shape, as people suggest, and he has – at last – a wig that looks convincing. He’s smooth, witty, deadly and charming. The claustrophobic fight in the elevator between him and a small-time smuggler, Peter Franks (whose identity he has assumed before he escapes and turns up at the same place as 007), rivals the fight between his 007 and Red Grant in From Russia With Love. In fact, I think it is superior. There’s something more desperate and certainly dirtier in this close-quarters fight, which looks a little less choreographed and lot more nasty.

The plot of the movie is actually rather complicated, with story threads introducing various characters (some of whom, like the gay assassins, Mr Wint and Mr Kidd, linger in the memory longer than others), and they all start to come together when we get to the big reveal of Blofeld still being alive and living in Las Vegas. He’s pretending to be a reclusive casino-owning billionaire Willard Whyte (a rather poor Howard Hughes caricature), whilst constructing a diamond-filled satellite laser that will wipe out the nuclear weapons of all the ‘Super Powers’ and then create a nuclear auction for supremacy, of which Blofeld will be the owner and auctioneer. The journey to Las Vegas takes in the series regulars of M, Q and Miss Moneypenny (with art mirroring life, Bernard Lee’s M says he’s not allowed a drink due to Doctor’s orders. He was to pass away from an alcohol-related illness during the Roger Moore era), as well as an appearance from yet another Felix Leiter.

The two main female roles are taken by two actresses who both have a lot up-front and up-top. And I’m not just talking about their substantial cleavages. Jill St John, as flame-haired and endearingly kooky Tiffany Case, is sassier than she appears; especially when you realise that all she is after is the diamonds and she uses 007 for her own ends in order to try and get them. It isn’t until much later in the film that you see her actually become a trustworthy ally to 007. Whereas Lana Wood, as Plenty O’Toole, seems to initially be there as a cheap knob gag and someone for 007 to go to bed with, but plays the part with enough charm and guile (and someone who is, again, after 007 for more than his looks – she’s impressed by his money-winning skills at the casino) for it to be a disappointment when she is literally thrown away out of a Hotel window and into a swimming pool. But, at least she made a big splash. Ahem. Jill St John was initially offered the role of Plenty but impressed the director so much that she was ‘promoted’ to the better role of Tiffany Case. There are some scenes cut from Plenty’s short ‘story’ that make more sense to her character arc, so her exit (and eventual demise in Tiffany’s swimming pool) wasn’t always so hasty and made a lot more sense!

Charles Gray’s Blofeld isn’t the most convincing of the trio of actors who played the role. His is a Blofeld of the 1970s, with all the gaudiness and louche behaviour that comes with that decade (even incorporating an unconvincing drag act). He doesn’t seem menacing and treats 007 like something his white cat has dragged in; his clipped voice and camp demeanour appearing to be shipped in from an Oscar Wilde play rather than a megalomaniac psychopath with delusions of grandeur. Previous Blofeld’s (Donald Pleasance and Telly Savalas) had much more respect for their adversary and – although opposite ends of the spectrum – had a certain malevolent charisma about them. Charles Gray, for all his fantastic posturing, looks like he’s channelling Noel Coward. The whole cloning aspect of this particular Blofeld, with his need to see 007 tortured and hurt and entrapped in some way, plays out like a sort of ‘Fifty Shades Of Charles Gray’.

In any 007 movie, there’s always some sort of chase sequence that sets it apart from the others. The standout of this film isn’t by way of the stolen moon buggy in Blofeld’s research facility in the desert, which – although well put-together – is a tad pointless and verging on the silly side, but it’s the chase through the Las Vegas streets with 007 driving a red Mustang and trying to outwit the police. If you look closely, you can see all the onlookers cordoned off on the pavement during some shots, watching it all being filmed. Because the chase ends with a ‘car on two wheels’ stunt down a slight alleyway, there are always those that say a continuity error creeps in due to the entrance and exit being filmed in different locations. The car enters the alleyway on its right wheels and comes out on its left. What people fail to point out is that we see 007 and Tiffany Case roll from one side to the other in a cutaway shot of them through the windscreen, showing that the car had grounded itself and then hit another side ramp before exiting.

Aside from 007 getting beaten up by two athletic ‘bodyguards’, amusingly called Bambi and Thumper (rather unlike the Disney characters of the same names), and the finale of the film not quite living up to the potential of the oil rig base (there was more planned but they ran out of time and money), the film itself is a very entertaining rollercoaster. As a swansong for Sean Connery (until the unofficial Never Say Never Again), it works very well. He’d always favoured inserting humour into the cold and calculating veneer of Ian Fleming’s spy; which he does with aplomb here (courtesy of Tom Mankiewicz’s re-write – a writer with a name that would get you a better score in ‘Scrabble’ than a round of applause for trying to pronounce it aloud).

The direction is flawless, with the returning Guy Hamilton allowing fluidity and flair in a film that could have been stodgy and stale (oddly, in the original script, the main villain was the brother of Auric Goldfinger from Goldfinger, which Guy Hamilton had directed and Shirley Bassey had sung the theme tune on, both of whom return here. It does make you wonder whether that was the reason they came on board originally). But, it’s the score by the stalwart John Barry that really stands out – his sleazy Vegas soundscape encapsulates the visuals to a tee and his theme tune, where he instructed Shirley Bassey to sing it as if she was singing about a penis rather than diamonds, is bombastic and sultry at the same time.

So, Diamonds Are Forever is essentially a linking bridge. It takes from the old and delivers the foundations of where the ‘style’ of the franchise was headed. It’s a film that seems to be a little too easily derided and a film in which Connery is accused of being in it for the paycheque, both of which accusations are totally unfounded and exploded when you watch the film again. It works because of it has a swaggering charm and because it doesn’t try and take itself too seriously. It’s a film capsule of the age in which it was made and sets up the template that Roger Moore would follow so successfully when he stepped into Sean Connery’s shoes for Live And Let Die.