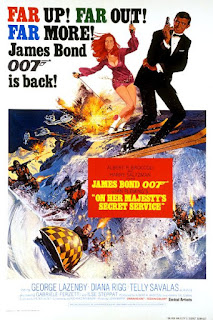 It's nearly Christmas so there's bound to be a James Bond film on TV somewhere. This week, we're looking back at Stuart Mulrain and Barnaby Eaton-Jones' series of articles on the 007 films. Here, Barnaby Eaton-Jones remembers On Her Majesty's Secret Service...

“I hope I can live up to your high standards.”

Popular opinion seems to be that, had Sean Connery stayed on to play James Bond in OHMSS, then this film would have been a certifiable classic; both critically and commercially.

I'm not a fan of popular opinion, as it fails to allow you to think for yourself and gives you an easy default option.

In my opinion, OHMSS *is* a genuine classic and what makes it so George Lazenby. He may have been hampered in Hollywood because of the baggage of being Connery’s successor but his raw Australian appeal means he's gung-ho and masculine and with a 'don't-give-a-stuff' attitude that actually fits 007 very well indeed. He was spotted for the role because he was similar to Sean Connery and, had the producers been a bit more confident in casting a relative unknown, they could have allowed him out of the Connery straitjacket. He's constantly surrounded to not-very-subtle nods to the past (in music, props and dialogue), which don't move the plot along and aren't necessary at all. At the time, it was a huge gamble to cast someone so unknown in a major movie franchise, so perhaps they judged their audience well, but to modern eyes it just reinforces the 'this never happened to the other fella' quote that Lazenby's Bond directly says just before the title sequence of his one and only 007 film.

So, what of the film itself? Well, it's not a Bond film. I mean, it is - obviously. But, essentially, this is a romance with some action, intrigue and adventure thrown in. It's also a tragedy of Shakespearean proportions in the tale it tells (on and off screen). If accusations of Sean Connery sleep-walking through You Only Live Twice are accurate then George Lazenby is the exact opposite. He's alive, vital and full of strength and bravado. You even believe he's in genuine danger at times and, because he's a new Bond in a new adventure for what might be a franchise-stopping film, the audience doesn't know whether he might get injured or even killed off (and see a new 00 Agent graduate to take his '7' suffix). The clever thing about Lazenby's casting is that they cast very, very strong actors around him – as if to inspire and help him. Dame Diana Riggs gives a naturalistic and feisty turn as Contessa Teresa di Vicenzo (known as Tracy, for short) – who is more than a match for Bond's character and the exact opposite of the usual 'woman in distress' stereotype.

In real life, and certainly in later years, she's been quite cruel about Lazenby; though her initial oft-quoted remark to him about eating garlic at lunch before a kissing scene was reported out of context and taken the wrong way. It appears that she was as implicit as her director, Peter R. Hunt, in making Lazenby feel as uncomfortable as possible. Hunt, himself, has refuted claims that he isolated Lazenby or that he would only speak to him via someone else during filming – saying he got on well with him and the only time he did that was to make him feel more vulnerable and also more focused as the character of Bond. There's two sides to every story and, although Lazenby tells of events conspiring against him during the filming, he's also admitted that his elevated ego – which got out of control when he was handed the keys to the Aston Martin – was left unchecked and his brusque Australian manner may have upset people. He even had his voice replaced in a third of the movie, when he's going under cover as Sir Hilary Bray (who he's met with previously, played and voiced by George Baker); a fact that Lazenby didn't learn until he watched the movie. There's no reason why this had to happen, as Blofeld hadn't met Sir Hilary before, so – again – this smacks of trying to wrong-foot Lazenby. Of course, the official reason he's a one-hit wonder is given as his Agent advising him that, in 1969 (when the film was released), a new era of film-making would see him as a throwback to the '50s and that 007 was obsolete as a character. So, on his Agent's advice, he turned down the seven-picture contract he was offered (and, if he was as bad as critics suggest, he wouldn't have been offered such a contract) and turned up at the Royal Premiere in the UK with long hair and a big bushy beard, convinced that the counter-culture movement was the way to go.

To me, that smacks of an insecure man looking for direction, thrust from modelling into a lead role in a major motion picture, trying his best to escape the hostility and criticism that surrounded him on-set. I've always thought he was given a rough ride and, if you read between the lines, you can make up your own mind about who was to blame in the troubled production.

However, what you can't fault Peter R. Hunt for is his modern-style direction. He came from a background of editing and earned his stripes on previous 007 movies, graduating to director with OHMSS. His style may not seem as quick-cut as today but, for then, it was pretty radical. The fight scenes are tense and fraught, the chases have you on the edge of your seat, and the framing of all of the movie is beautiful. For a franchise that liked to re-use talent again and again behind the scenes, I’m not sure why anyone wasn’t knocking down his door with a new contract in hand to get him to return. Sadly, he never came back to the 007 fold and that's a real shame as the Bond films lost a leading man and a leading director all in one go. 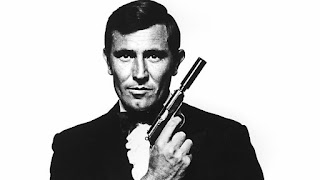 I've always felt OHMSS was sort of a successor to From Russia With Love in style and attitude (and in making 007 feel like a spy rather than a playboy). Incidentally, From Russia With Love is Sean Connery's favourite Bond film and you can see why. There's real consequences to actions, a sense that 007 is in actual danger, and a supporting cast who are all uniformally good and memorable. Where we have From Russia With Love's lovable rogue Kerim Bay, we have similarly loveable rogue-like Marc-Ange Draco (Tracy's father) in OHMSS. Again, it's a character that you felt could have turned up as Bond's ally in another movie somewhere. Of course, where From Russia With Love had SPECTRE's presence with not one but two agents (Rosa Klebb and Red Grant), OHMSS has a clone of Rosa Klebb in Irma Bunt (minus the poisoned-dagger-in-the-shoe trick) and, in place of Red Grant, we have head of SPECTRE himself, Ernst Stavro Blofeld; plotting against the world again. However, there is a line of thinking that Blofeld is acting alone, rather than for his organisation. What is odd, though, is the film's failure to acknowledge that Bond and Blofeld had met for the first time in the previous film (in the form of Donald Pleasance's creepy, cowardly weasel of a performance). In Ian Fleming's books, Bond had plastic surgery to alter his appearance which results in Blofeld not immediately recognising him, and that would seem a perfect explanation for the change of lead character from Lazenby to Connery too. Why it isn't included, when this is one 007 film that sticks the most faithfully to adapting the novel it's sourced from, is an odd decision.

Telly Savalas gives life to Blofeld as a confident, smooth operator, tinged with a witty megalomania. It's an assured performance, overseeing his domain from his mountain-top ski lodge (where he's experimenting on a whole host of woman from different nationalities, to use as his would-be assassins for biochemical warfare), and – for me – he's the most believable Blofeld. Charles Gray would turn up in the following film, as a sneering Noel Coward-esque figure, who acts more like a gloating ex-girlfriend than a deadly rival. Oddly, the side-product of Blofeld’s research in OHMSS is that he's found a cure for all allergies - which would net him millions of pounds in licensing, etc. So, he could quite easily take over the world by business means, rather than nefarious ones!

So, really, everything that could go right with a James Bond movie does go right. Peter R. Hunt's assured direction and editing, the strong lead characters carrying the film, the emotional storyline that has a surprisingly downbeat ending, and John Barry's remarkable soundtrack is rightly cited as one of the best; with a luscious theme that has been used many times afterwards, and there's no title song but there is a haunting end song instead: All The Time In The World, sung so emotionally by Louis Armstrong (which would turn out to be his last recording). Barry himself said that he tried to make the score 'double strong to make the audience forget they didn't have Sean (Connery)'. He certainly succeeds.

A little curio to end on, regarding the crossover from the James Bond movies with the British TV series The Avengers. Both leading ladies in The Avengers, Honor Blackman as Cathy Gale and Dame Diana Rigg as Emma Peel, left the series to appear as a major female role in a 007 movie. Whereas, in this one, Joanna Lumley features amongst the women in Blofeld's alpine hideaway, and would later star as the main female lead in the revival of the series. The main male lead, John Steed (Patrick Macnee), who appeared throughout ALL series of The Avengers is Sir Roger Moore's Bond's sidekick in A View To A Kill. But, then you probably knew that, being readers with illustrious taste in viewing habits.

So, if you're avoiding OHMSS because of other people's views on George Lazenby or if you'd like to re-watch it again disregarding the 'popular opinion', watch it at once. It's James Bond at his most real and the perfect marriage between the original Ian Fleming book and the blockbuster 007 franchise.