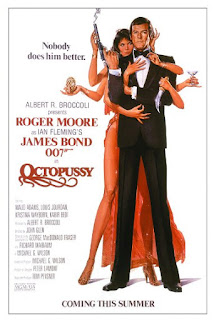 It's nearly Christmas so there's bound to be a James Bond film on TV somewhere. This week, we're looking back at Stuart Mulrain and Barnaby Eaton-Jones' series of articles on the 007 films. Here, Stuart Mulrain remembers Octopussy...


“You have a nasty habit of surviving!”

And so we come to Roger Moore’s penultimate Bond adventure and it’s probably fair to say that this is the second worst film in the series. After trying to give Bond a bit more of a serious and grounded feel in For Your Eyes Only, EON almost do a complete 180 in their approach to Octopussy. The biggest problem with the film is that they are so heavy handed with the lighter feel of the film that the film ends up playing more like Carry On Up The Indiana Jones than Bond 13.

Timothy Dalton had again been considered for the part for this film, but still felt he was too young. Other actors were considered (including fellow Saint actor Ian Ogilvy), but American actor James Brolin was the lead contender to be next in line to take up the famous Walther PPK (or Walther P-5 as is mostly the case in this film). As this film was going up against the Connery starring unofficial Bond film Never Say Never Again, Albert R. Broccoli preferred to have an established Bond go up against it than an untried (and American) actor. So at the last minute, Broccoli met Moore’s demands (probably for more money – most disputes with Broccoli were reportedly about money) and let him play Bond again.

Once you accept the fact that this is Roger Moore’s James Bond and not Ian Fleming’s, it’s easy to see why he was so popular. Moore is a very likeable actor and is always enjoyable to watch, but the trouble is that he was too old for the part by For Your Eyes Only and was only getting by on his own charm to distract you from his age. It would have been better had Moore been playing his age, maybe playing Bond as an older, slightly more world weary man. Moore had excelled a few years earlier playing his age as Ffolkes in North Sea Hijack and for him to have brought some of that to his last three Bond films would’ve at least added something new to his take on the character.

Fortunately there is an attempt to close the age gap between Moore and his leading lady (a problem with For Your Eyes Only) by bringing back Maud Adams to play Octopussy. Adams was one of the best things about The Man With The Golden Gun and is arguably the best thing about this film too. Originally intended to be the main villainess out for revenge against Bond (later re-used for The World Is Not Enough), Octopussy was instead changed to an ally, continuing the run of strong Bond girls. Octopussy is largely a reworking of the Pussy Galore character from Goldfinger (with an aerial squad swapped for an Octopus Cult/Circus), but in Adams hands is one of the most memorable female characters of the series.

Bonds other main ally in this film is professional tennis players Vijay Amritraj’s imaginatively named Vijay. This casting leads to some particularly clunky tennis gags in the middle of an already slightly ridiculous looking chase through the streets. Given the lightness that his character is handled with throughout, it is a genuine surprise and shock that the character meets the fate he does and in the style he does. It’s almost brave in how out of step it is with the tone of the rest of the film.

On the villain side of things we have the excellent Louis Jordan as Kamal Khan. His performance is pitch perfect and he gets some great lines which he delivers with great style. Kabir Bedi as Gobinda is very much the strong, silent breed of henchman, a sort of Jaws without the shiny teeth. He is a solid character and is well played by Bedi. Rounding out the trio of villains in the film is Stephen Berkoff’s General Orlov, who is arguably the weakest of the three. To accuse anyone of over acting in this film is slightly redundant, but Berkoff hams it up so much at times (his speech in his first scene being the biggest offender) that he pretty much ruins what could have been one of the most interesting characters in the film.

The Bond family trio is all present and correct. Robert Brown makes his debut as M who returns after his respectful absence in For Your Eyes Only. Bernard Lee is a tough act to follow and Brown benefits from not coming straight into the role, making the part his own. Desmond Llewelyn as Q is given more to do than usual, actually becoming part of Bonds mission. Lastly we have Lois Maxwell still hanging in there as Moneypenny. Like Moore, Maxwell is too old for the part by now, but given the continued use of Moore, her continuation in the role makes sense. With the inclusion of Penelope Smallbone there is the hint of a replacement character potentially waiting in the wings, but the character is never seen again after this film.

This is John Glen’s second outing as a director on a Bond film and he does his usual by the Bond book job in the chair. He does incorporate some nice visuals into the film, particularly Magda’s exit from Bonds hotel room, but largely the direction is uninspiring. Fortunately the film does boast a pretty good pre-credits sequence that culminates in a great aerial chase between Bond and a missile. He also does a good job of building tension in the right places; most notably in the scene involving the bomb in the circus (although it would’ve taken Bond longer than the 5 minutes he had left to apply that clown make).

The opening credits sequence is not one of Maurice Binder’s best, but it is at least backed up by Rita Coolidge’s decent – Nobody Does It Better-lite – All Time High theme song. This is the first Bond theme to not incorporate the film’s title into the song in anyway and you can’t help but wish they’d found a way to get it in, just to see how they would’ve done it. On the score front John Barry returns and gives his usual solid - if slightly by the numbers, on this occasion – turn in the composer’s chair.

Although the film takes its title and some of its story from the Octopussy short story, it also incorporates The Property Of A Lady – which it acknowledges within the film – and elements from The Living Daylights. The overall story of the film is largely forgettable though and by the end of the film you’ve pretty much forgotten the plot points that have gotten you to the climax. It almost feels like the films three writers never spoke to each other and that what they had was just cobbled together to make the whole.

The so called ‘Battle Of The Bonds’ proved to be a non event after Never Say Never Again suffered delays and had to push back its original release date. Money wise, Octopussy emerged victorious, out grossing Never Say Never Again, but picking between the two is a little like deciding whether you would rather be shot or stabbed! Probably the most annoying thing about Octopussy is that it contains some of Bond’s most memorable characters and moments, but they are squanders in this uneven mess of a film which is hampered by casual racism, poorly handled attempts at humour (especially during the jungle chase) and from having the title Octopussy!