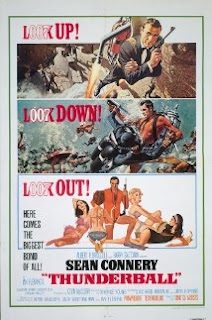 It's nearly Christmas so there's bound to be a James Bond film on TV somewhere. This week, we're looking back at Stuart Mulrain and Barnaby Eaton-Jones' series of articles on the 007 films. Here, Barnaby Eaton-Jones remembers Thunderball (a little less than fondly)...

Surely, this film should have inherited the next title? You Only Live Twice! Because, in twenty years time, Thunderball would be remade – with Sean Connery reprising the James Bond role at the same time as Roger Moore was being James Bond in Octopussy – and this remake would be called Never Say Never Again.

First of all, how does a 007 movie get remade, when the famously litigious Broccoli family who produced the franchise (Harry Saltzman left the partnership around the start of Roger Moore's tenure as Bond) do their very best to squash anything like this happening? Well, hereby hangs a very long tale. But, that's all documented in a very fascinating book called The Battle For Bond by Robert Sellers. In a very small nutshell, Ian Fleming wrote a film treatment that he shopped around film studios when his 007 books were selling well. Two other men, Kevin McClory and Jack Whittingham - had a hand in writing it with him, as they knew more about that side of the business than he did. Nothing came of it, so Ian Fleming turned it into a novel but failed to credit either of the other men. A court case ensued, Fleming lost, and the rights to the Thunderball book and the contents within became a co-property with McClory and Whittingham. You can read more about that when we get round to Never Say Never Again!

Thunderball is a dull film, though.

I'm sorry, did I say something wrong? Ahem. I think I just heard the collective gasp of 007 fans over my typing.

Look, I'm sorry. It's the one Bond film that I normally actively avoid watching. However, it is also – adjusting for inflation – the most money-making of ALL Bond films. The story isn't bad but there's an awful lot of focus on underwater action – which is very hard to make hugely exciting when you can only move at a certain speed. Plus, most of these sequences (especially the final climactic battle) seem to go on for an eternity and you genuinely feel like you're drowning.

It doesn't help that the main villain of the piece is a Number Two. I'm not trying to be rude here. He's a SPECTRE Number Two called Largo and he's yet another underling working for the shifty evil organisation. He never really feels particularly menacing and the eyepatch they give a dubbed Aldofo Celi to play the role seems to be an excuse to spice up a bit of a not-very-well-drawn character. 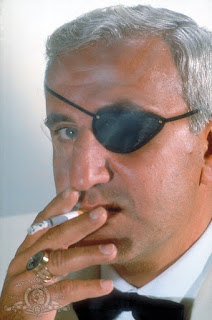 It starts off well, with a genuinely shocking moment when Sean Connery's Bond appears to punch a grieving widow full in the face, until it turns out the widow is in fact a SPECTRE Agent at whose funeral Bond is attending. The iconic Aston Martin DB5 makes an appearance and so does a futuristic jet pack which Bond uses to escape SPECTRE's clutches. There's a long-winded sequence in a Health Spa where, luck would have it, Bond meets someone that will be very coincidentally important in a follow-up mission briefing from M (Bernard Lee), when he recognises the face of a dead NATO agent. Then, because of this, SPECTRE manages to get hold of some nuclear devices and threaten both the English and American governments. So, it's up to all the 00 agents to be dispatched all over the world and find the nuclear devices before it's too late. Of course, we could have followed any of the 00 agents on their mission but that would have confused the audience greatly! So, we get to follow 007 who, as luck would have it, winds up in a tropical paradise and finds Largo and his many nefarious accomplices (it has to be said, femme fatale Fiona (Luciana Paluzzi) is the best of the bunch and I wish she'd been calling the shots instead of Largo. You get a genuine sense of danger with her strongly-written character and performance, with Bond more than meeting his match in female form).

I suppose this film is a case of 'if it ain't broke, don't fix it' – with returning personnel behind the scenes and Sean Connery being at his most suave and confident in the role. He's added that caustic black humour to his repertoire – which augments the killing he does, rather than offsets it like later one-liners would – and, behind the scenes, is revelling and reeling from the public recognition and limitations of playing one character. It was a shortcut to movie stardom for him but, as he's said many times in interviews, it came at a price and he was eager to throw off the character as quickly as the character could throw on a tuxedo.

One extra gripe is the theme song, sung bombastically by Tom Jones. It replaced, at the last minute, the much more subtle yet obvious Mr Kiss Kiss Bang Bang by Dionne Warwick. Rumour has it that, at the end of the Thunderball theme, Tom Jones fainted in the recording booth because of holding the big last note so long. I think it more than likely that somebody hit him over the head to stop him showing off.

Often, when you read a 007 review, you'll always get a mention of Connery's toupee. He wears one from Goldfinger onwards, as he was balding and, although personally not bothered by it (and wouldn't wear one outside of his film roles), he had to keep that secret agent image intact. The connection between Thunderball and Never Say Never Again is strengthened by the fact that both films of the same Ian Fleming book feature the worst hairpieces that Sean Connery had to endure as Bond. Slicked across his head, as flat as a pancake, and with a side parting that appears to start at one ear, it's obvious that they were streamlined for the underwater filming. Ahem.

So, with a returning director in Terence Young, a returning writer in Richard Maibum, a returning Connery and a return of SPECTRE, the 007 rocket seems to be in a steady cruise control mode and it would only be when Sean Connery announced his retirement from the role after his next and most elaborate outing, that things got shaken up (though not stirred) and returned to a more realistic footing all-too-briefly.

There is lots to love in Thunderball and it isn't as weary a watch as I feared but it does seem to have needed a bit of judicious editing and – although the budgets were getting bigger on every movie – it might have been a case of 'less is more' working best after Goldfinger's over-the-top gloriousness.