Double-0 Christmas - You Only Live Twice 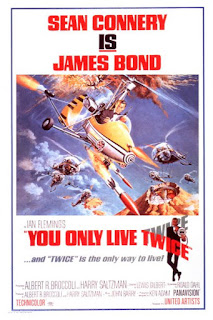 It's nearly Christmas so there's bound to be a James Bond film on TV somewhere. This week, we're looking back at Stuart Mulrain and Barnaby Eaton-Jones' series of articles on the 007 films. Here, Barnaby Eaton-Jones remembers You Only Live Twice...

You Only Live Twice is a crossroads in the James Bond franchise. Not only was it the supposedly last film for Sean Connery’s version of 007, before he was wooed back for two one-off deals - Diamonds Are Forever (official) and Never Say Never Again (unofficial), but it was also the point where any sense of reality gave way to complete and utter fiction. It started the ever-enlarging snowball of sets, locations, plots and gadgets in motion. Of course, there were all of these things previously but it was like You Only Live Twice tried to emulate the title by amplifying everything to twice as large as life. It is such a shame that the same couldn’t be said of Sean Connery.

For a man with the nimble agility of a panther, the twinkle of a saucy suitor, the suavity of velvet and the rough edge of sandpaper, this version of Connery’s Bond looks as bored as a man who’s been told by his wife to go into a Home Furnishings superstore and pick up some cushions to match their lounge. He’s just not interested. That is one of the biggest problems with the film as a whole. If your main character isn’t engaging you, then it’s difficult to love what goes on around him. It has been noted that, by this point, the Press intrusion and the cloying nature of the role had made Connery want to stretch his acting muscles elsewhere. There is little or no character development for Bond in Connery’s era, as 007 becomes more and more detached from the action and reliant on a ready quip. So, although it is easy to empathise with Connery as himself, it’s a little difficult to empathise with Connery as Bond in You Only Live Twice.

In the Pre-Credit Sequence, outer space looms large as a Pre-Commander Straker (Ed Bishop, of Gerry Anderson’s UFO series fame) spots a UFO before anyone else does, based in a tiny station in Hawaii. This UFO promptly opens a pair of gigantic jaws and bears down on the tiny USA space rocket, whilst we cut to Connery’s Bond doing much the same thing on a tiny Japanese woman. He is promptly assassinated and so the Titles begin.

Of course, he isn’t really dead, and the dated story of a stand-off between the USA and the USSR (now Russia) is the main thrust of a plot that doesn’t really stand up to great scrutiny. Roald Dahl has a way with a witty line and an imagination that dwarfs many other writers, so he was thinking big when he was asked to write You Only Live Twice and he doesn’t disappoint. The story itself is as far removed from the Ian Fleming novel as Adam Sandler is from winning an Oscar but there is fun to be had in the smaller details. For example, the trusty trio of Bernard Lee’s ‘M’, Desmond Llewelyn’s ‘Q’ and Lois Maxwell’s ‘Miss Moneypenny’ are like a cosy little family now, so much so that ‘Q’ takes a jaunt out to Japan later in the film to show Bond his ‘Little Nellie’. Luckily for Bond, this turns out to be a Do-It-Yourself Gyrocopter, which engages in an amusing aerial battle with full-size helicopters and turns out to be David to their Goliaths. Sadly, the ‘Bond girls’ fail to make an impression because their roles are largely underwritten and somewhat one-dimensional for spies in the Japanese Secret Service; especially compared to the Head of that organisation, Tiger Tanaka, who gets a very well-written supporting role which is played with relaxed ease.

The sheer scale of the production values is what stands out most in this film. The location of Japan, where Bond is sent undercover, is showcased so heavily that the film sometimes becomes an exquisite travelogue with gorgeous, lush music to match the visuals. The grand scale of these two elements save the film from becoming a watered-down precursor to the excesses of the Roger Moore era that was to follow. Obviously, honourable mention goes to Ken Adams, who – as the Production Designer – shows off his amazing Evil Lair Within A Volcano set, and also to John Barry – the Composer of the score – who shows off his versatility in mixing the familiar with the new and grounding it in whatever location the film is set in. Lewis Gilbert deserves an honourable mention, as the Director of the movie, for providing such a visual spectacle.

The villain of the piece – who is trying to manufacture a nuclear war between two superpowers - is revealed as Ernst Stavro Blofeld, which is a revelation that has been waiting to happen since Dr. No. He was always there, as a shadowy figure in the background; allowing his minions to do all the evil work for him. Here, he does the same thing but emerges blinking into the limelight in the latter half of the film with a bewitchingly oddball performance by Donald Pleasance. His line-reading of ‘Goodbye, Mr Bond!’ (which, on paper, looks a very ordinary line indeed), when he appears to be about to shoot Bond dead in the near-climax, is proof that his take on the character was by far the most unhinged and genuinely psychotic of all that came before and all that were to follow. The emphasis is in all the wrong places in his screamed threat but it works absolutely perfectly. It’s odd to think that he was a late replacement for Jan Werich, a Czech actor, who had already shot scenes as SPECTRE’s mastermind but was replaced because he looked like a ‘benign Santa Claus figure’ (according to Lewis Gilbert, the Director).

The worst thing about watching You Only Live Twice in this day and age is that virtually every aspect of it became the template for the affectionate parody: Austin Powers: International Man Of Mystery. It is difficult to look at Blofeld without thinking of Dr. Evil and that comedic overdubbing robs the film of any dramatic tension or seriousness. It’s unintentionally camper than it should be, simply because the huge success of Austin Powers overlays the parody blueprint over the top of it.

In retrospect, this isn’t helped by scenes in the movie where Bond is ‘turned’ into a convincing Japanese fisherman to avoid detection. And by ‘convincing’, I do mean ‘Mr Spock’. It’s so awful, you can’t even call it racist because it just doesn’t look anything like a Japanese person at all. You can even see how uncomfortable Connery is with these scenes. It is a superfluous element to the plot, which could have been avoided with Bond just staying deep undercover. There is no real need for him to marry a Japanese woman and re-enact The Vapors’s one-hit single ‘Turning Japanese’.

In looking at the film as a whole, it is very easy to pick apart the outlandish elements and the much-parodied familiarity that we have with it. It is definitely the one Connery liked least and, yet, probably the one that audiences remember most – even if it is for the huge set-pieces (the hordes of Ninjas abseiling down from the roof of the Volcano base, for one example). So, there is action, spectacle, scale and ambition in You Only Live Twice but it fails to live up to the sum of its parts. Even though they seem like stitched together elements, rather than a cohesive whole, the audiences of the day flocked to see it (with Queen Elizabeth II turning up for the first time at the Royal Premiere in England). So successful was this outing that the Producers, Cubby Broccoli and Albert Saltzman, were confident that the franchise could live on without the lead actor and with an unknown in his place.

(A version of this review first appeared on Cult Britannia)