Double-0 Christmas - The World is Not Enough 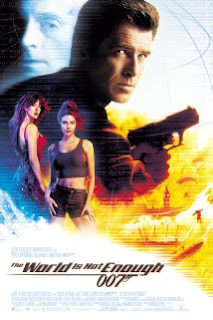 It's nearly Christmas so there's bound to be a James Bond film on TV somewhere. This week, we're looking back at Stuart Mulrain and Barnaby Eaton-Jones' series of articles on the 007 films. Here, Stuart Mulrain remembers The World Is Not Enough...

The World Is Not Enough (which I shall refer to as TWINE from here on in) is something of an oddity in the Bond series. On the whole, it’s a largely forgettable experience, enjoyable enough while you watch it, but difficult to remember once it’s over. I’ve seen it several times since it was released at the cinema and still had to watch it again for this review, just to refresh my memory of it.

The oddity of it is that it is also a very significant Bond film because it marks the final appearance of Desmond Llewelyn in the Bond series. After a bit of buffoonery involving John Cleese’s R (soon to be Q) – which is a little bit of a blot on the scene – Llewelyn has a wonderful final exchange with Brosnan that reminds you just how fond of Bond Q actually is. His final line “Always have an escape plan!” as he’s lowered out of the scene - and the franchise – never fails to make a tear start to form in the corner of the eye. It’s a poignant moment enough as we say goodbye to a much loved character, but with the knowledge that Llewelyn died shortly after the film’s release, the moment has even more impact.

It’s easy in this post Die Another Day/Daniel Craig era to look back on Brosnan’s tenure with a hint of mockery – and in certain areas it is arguably justified – but whilst he was in the tux, many considered Brosnan to be the best Bond since Connery (much as Craig is thought to be now and whoever inherits the role after he does probably will be as well). In retrospect though, Brosnan seems to be going through the motions in TWINE, seemingly phoning it in at times.

The fact that TWINE came out just a few months after The Thomas Crown Affair – Brosnan’s finest film (in this writers opinion at least) and one in which he oozes style, charisma and sexual chemistry – seems to highlight Brosnan’s seeming boredom with the role. But then in Thomas Crown Brosnan was matched with a female love interest that was an equal match to him, both in age and character, whereas – in Denise Richards particularly – he is forced together with an actress he has little to no chemistry with.

The Bond girls are something of a problem here. Let’s get the elephant in the review out of the way now. Richards is just wrong as Dr. Christmas Jones. It’s not that her acting is bad – it’s not great, but it’s not as bad as everyone tells you it is – and in a different film she might have made a believable nuclear physicist (doubtful I’ll grant you), but here she is horribly miscast. She looks too young for the part, especially when put next to Brosnan. With some better writing and an older actress in the role, she could’ve been a solid character who might’ve had real chemistry with Brosnan. 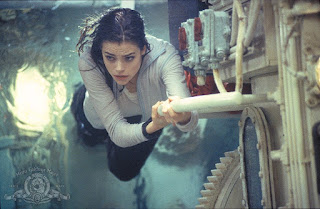 On the other side we have Sophie Marceau’s Elektra King. King should have been considered one of the greats when the topic of Bond girls comes up, but she is so oddly executed in the final film that she is largely forgettable. Some of the blame for this is in Marceau’s performance, as she chooses to play the character so broadly that she fails to hit the depths of the victim side of the character and goes – at times - full Zorin as the maniacal mastermind of the films evil plot.

There are many things to enjoy about TWINE whilst it’s on. The pre-credits sequence (the longest in the series history) is a highlight, as is the return of Robbie Coltrane as Valentin Zukovsky. Given how likable the character actually is (especially as he is the comic relief), it’s a shame they decided to kill him off at the end of the film. Yes they give him a noble death, but it seems to come from nowhere and is a real down note to walk away from the film on.

The real highlight though is Robert Carlyle’s Renard, a rare example of the henchman taking centre stage. Carlyle pitches the character just right, presenting us with an unsettling villain who looks like he might snap at anytime, but never crosses that line. It’s possibly because he’d played Begbie in Trainspotting just a few years before that you’re waiting for him to go full psycho here, but the fact that he doesn’t is what makes the character work so well.

Overall Michael Apted provides solid direction and turns in a descent enough Bond film, but it largely feels like it’s paint by numbers direction, but then this is a largely paint by numbers Bond film, with all of the elements echoing past Bond films. It works in that it gives the film a classic Bond feel, it’s just unfortunate that it has very little that makes it stand out in the memory after the fact.