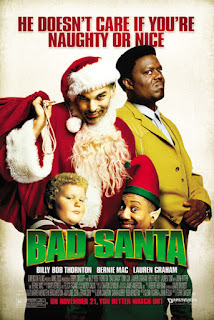 Steve Taylor-Bryant gets to that point of the year where Bad Santa has to watched again. Then he wrote about it. Then we took out all the swearing*. Now it’s short but readable...

“You're an emotional fucking cripple. Your soul is dog shit. Every single fucking thing about you is ugly.”

[*well, not all the swearing…]

For some reason it took a studio until 2003 to release a Christmas film for those of us a bit fed up with the saccharine-sweet time of year. When Bad Santa was released, I was running a restaurant group and Christmas normally started in July when I ordered 20,000 crackers, so the chance to enjoy period entertainment without losing my mind was grasped with both hands.

Billy Bob Thornton plays Willie Soke, an alcoholic criminal who decides to play Santa at a shopping mall so he can rob their safe. Partnered by an angry dwarf (Tony Cox), the plan of a simple robbery gets complicated by an overweight eight year old, Thurman "The Kid" (Brett Kelly), who believes Willie is the real Santa. After telling Soke that he lives with a senile Grandmother, Willie takes advantage of the new friendship offered by a child and moves into the house while the robbery gets planned.

Billy Bob Thornton plays the part of Willie Soke with deadpan excellence. Wetting himself, fornicating on his break and delving to the bottom of a bottle at any and every opportunity, it is impossible to see anyone else in the role.

Tony Cox is full of angst and hatred in his role as the short mastermind, and is a nightmare elf that you really don't want near your children. Bernie Mac makes a glorious cameo and, if you mix in "Santa's Sister", a woman who wants to have sex with Father Christmas, played by the Gilmore Girls' Lauren Graham and John Ritter, shining like a star above Bethlehem in his final role, you really get a cast that are top notch.

The drunken abuse and swearing is relentless throughout the movie without becoming grating and, yes, this is definitely a one joke film, but the joke is funny and the delivery time and again, especially by Thornton, is a joy to the laugh muscles. If you really have had enough of the Christmas spirit by now, drown yourself in the vodka fuelled comedy that takes Will Ferrel's Elf and molests it because it can.