Film - Sick of it All 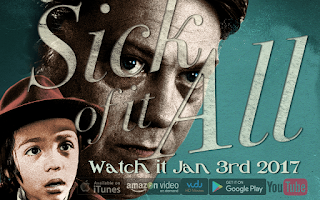 One of our favourite films from this year's Raindance Film Festival is coming to "the Internet" next month. Watch the new trailer for Sick of it All from Lefthouse Films...

We've followed the fortunes of Lefthouse Films and their director Brian McGuire for a few years now and have been lucky enough to review several of their films at Raindance Film Festival, like Window Licker and 1World, 100 Lonely, so it was great news when we heard that their latest film was also getting its World Premiere at Raindance this year. And it certainly lived up to expectations - read Steve Taylor-Bryant's review of the film.

So there was great excitement yesterday when Lefthouse Films got in touch to let us know that it was getting a worldwide digital release on 3rd January 2017, on Amazon, iTunes, GooglePlay and more, and to show off their new trailer for the film.

Written and directed by Brian McGuire, Sick of it All is a black and white noir-style comedy based on the French children's book, The Little Prince written by Antoine de Saint-Exupéry.

Sometimes it's hard to tell. And sometimes it takes a child with the wisdom of an adult, to change an adult who is acting like a child. And sometimes the only problem is, the grown up has to listen. And it's hard to listen when you are Sick Of It All. Antony (Logan Sparks) is a stressed out, grown up, toy collector who has lost his youthful ways. Perhaps he lost his vigour through years of telemarketing, or it could be his constant struggle with the modern world. But maybe just maybe it's because he finds himself in a loveless relationship with his lady of ten years, Rose (Amy Claire). Is it time for Antony to grow up and join the new age "sonic healing cult"? Or will he take the sage advice offered by his 7 year old nephew LP (Zion McGuire, Brian's nephew) and find himself again?

Pre-order the film on iTunes HERE.
Email ThisBlogThis!Share to TwitterShare to Facebook