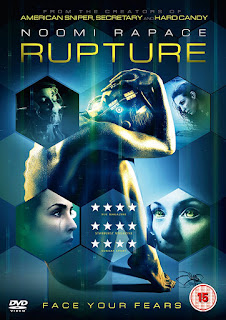 Noomi Rapace’s characters do seem to get into extraordinarily unpleasant situations, don’t they? In her current movie Rupture, her plight is once again pretty dire.

Rapace turns in another impressively physical performance as Renee, a single mom whose home, we soon discover, is full of hidden surveillance cameras.

Who is watching Renee and her young son, and why? Rupture has the kind of narrative structure that creates tension by withholding information. We keep watching because we want answers to questions – perhaps she is being watched by her hostile ex-husband, perhaps by the government, perhaps by a peeping Tom?

We also note that a car is parked outside and sinister man (Michael Chiklis) has the house under surveillance. He fixes a small device to the wheel of her car, then follows her as she drives her son to visit his father.

As she motors alone along a deserted highway the device blows the tyre and she is stranded. A small truck pulls up, ostensibly to help, but the car with Chiklis has also pulled up and is supervising the events from a distance. As Renee is tasered and bundled into the back of the truck by two men, we fear the worst.

Instead, a soft-spoken, smiling and efficient woman enters through the doors of the truck. She goes by the name of Nyman (Lesley Manville). Nyman calmly shackles Renee to the wall by her foot and slowly removes her jeans. After prior reassurances from the woman, this seems to bode a particularly disturbing development.

Renee is drugged and after driving throughout the day she eventually arrives, semi-conscious, at a secret destination - an abandoned office building that has been turned into a makeshift medical facility.

Then she is strapped down on a gurney and locked in a room. However, instead of being subjected to the torture-porn scenarios we have been dreading, coolly serene medical staff enter, checking information they have gleaned about her and gloating over her ‘interesting skin’. Needless to say, their cryptic comments and impassive manner is less than reassuring, and we are particularly disturbed when the Chiklis character nods approvingly while stating – “I just know she's going to rupture".

Insisting they are trying to ‘help’ her, they enthusiastically inject her with a strange, rosy chemical and proceed to do what they can to scare her out of her mind. Apparently, forcing her to face her greatest fears is the catalyst that may bring about the transformation that is the goal of their experiment and which may engender the result that they are hoping for. 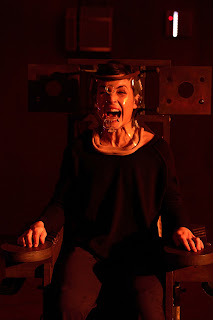 Renee is not the only one undergoing trials in this facility. When her captors leave her alone to attend to their other subjects, she wriggles around to get to a Stanley knife that she conveniently placed in her back pocket earlier that morning, when she intended to make some electrical repairs.

In between her ‘Room 101-type’ sessions, Renee unshackles herself and succeeds in escaping and secretly exploring the underground facility. Her ensuing journey through the building's air ducts follows the structure of giving us information piecemeal and only allowing us to unravel the mysterious proceedings through Renee’s eyes.

Her frantic exploration of the ducts and corridors lets Rupture string us along while slowly revealing the nature of her place of incarceration. She finds that it is not so easy to escape, as the doors require electronic identity cards to open.

We do discover however, that the chemical injected by her captors enables people’s deepest fears to trigger a mutation at a genetic level. Despite the difficulty of finding a way out, it is rather unlikely that Renee would race back to her cell and slip into her restraints and submit to further painful tests. Unfortunately, this is not the only time the storyline takes an illogical turn and taxes our credibility.

Unfortunately, we can soon guess the rules of the game, which makes the proceedings unsettling rather than scary. More troublingly, the third act turns out to be rather anti-climactic.

When the denouement finally comes, it is unsatisfyingly revealed as a disappointingly familiar scenario. In addition, there's a lack of inspired creature design and use of FX when it comes to depicting the eponymous transformation.

Nevertheless, there are some atmospheric and creative visuals. The movie can boast an effective ‘creepy-bunker’ production design and the use of colour and the camera work generate a great sense of claustrophobia and oppression.

The performances are solid, particularly Kerry Bishé as the mannequin-like scientist Dianne, with her creepy, imperturbable smile. Lesley Manville as Nyman is a tranquil yet sinister presence, whose interactions with her hostage prove to be weirdly entertaining. It is still more or less a one-woman show though, with Noomi Rapace leading, as the ‘villains’ of the piece are ever self-possessed and almost mechanical in their demeanour.

Rupture is the sci-fi horror that ends the ten-year hiatus from filmmaking by Steven Shainberg, whose last movie took a strange turn with the ambitious but loopy Diane Arbus bio-pic Fur. Considering co-writer Brian Nelson penned Hard Candy and Shainberg directed the excellent Secretary, I must admit I was expecting something more challenging, with more emotional depth and a fair degree of tension. However, after a promising beginning, Rupture feels tame and conventional in comparison with their previous endeavours.

Apparently, Rupture is getting a sequel, so it remains to be seen what might still be done with this plot. Here’s hoping it may become something more unusual and exciting in the next incarnation.