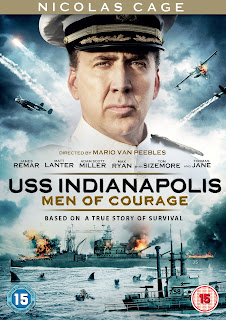 Susan Omand heads for a war of two halves as she watches USS Indianapolis: Men of Courage, out on 19th December on Digital release and on 9th January on DVD from Lionsgate UK...

I will not be defined by what I face but how I face it.

I am the first to admit that I’m a sucker for a Nicolas Cage movie. I’m not sure why, I just am – I find the film choices he makes, even the decidedly dodgy ones, are fascinating. Then you add in the fact that this is a World War II film based on the true events surrounding the sinking of the US Naval cruiser Indianapolis, the one that went out on a covert operation, with no official escort, to deliver the enriched uranium for Little Boy, one of the atomic bombs that ended the war with Japan. Mix all this with Mario van Peebles directing and this was definitely a film I was going to watch.

I’ll say this from the off, this is a film of two halves. Watch the first 45 minutes of this 2 hour film only because you have to in order to get the character build up, which is excellent and highly engaging, but ignore everything else about it, including anything to do with long shots of battles. “Ropey” doesn’t even begin to cover it - the CGI is utterly awful on scenes which should have been epic. The gun flashes are badly mistimed, the aeroplanes’ physics is all wrong - they look like they’re flying like helium balloons rather than being the weighty, motor driven objects they should be – and the ship itself, especially the overview of the deck as it pans across it in what should have been an awe inspiring shot, wouldn’t have looked out of place in a 1980’s simulator arcade game. And don’t get me started on how fake the torpedoes look. As if that wasn't bad enough the editing in the first half hour is headache inducing, jumping unnecessarily from shot to shot very quickly and with a yawing camera action that makes this bit of the film almost unwatchable. To be honest, if I hadn’t been watching this film for review, I would have given up on it about 40 minutes in, it was that bad but, please, please persevere with it. Why? Because, if I’d given up, I would have missed out on the second half of what is a truly excellent film.

Now, if you know me at all, you will have realised that I’m not a “people” person, I don’t do the whole emotional connection thing, but, by god, the second half of this film got to me as it followed the crew who abandoned ship after a cataclysmic torpedo hit from a Japanese submarine. That’s why suffering your way through the CGI travesty that is the first half of the film is so important. You connect on an emotional level with these men, with their characters, which intensifies the full impact of the horrors and pain that faced them, physically and mentally, as they struggle to survive in disparate groups spread out over miles of shark filled ocean. The acting is superb, the editing and camera work settles down and the CGI (even with the sharks) is much better so you feel every agonising moment on those life rafts, rise to every riling comment as they bicker and make bad decisions, and despair as hope leaves each of them, one by one, stranded in more ways than one.

*SLIGHT SPOILER* After 5 days, and many mistakes on the part of commanding officers on the receiving end of distress calls, only 321 of the 1,196 crew men aboard, including the Captain, are rescued alive.

But that’s not the end of the film. Sadness turns to anger as it goes on in captivating detail to show how the navy covered up the whole incident, burying the news reports and scapegoating the captain rather than taking the blame themselves, court-martialling and convicting him for not taking correct evasive manoeuvres even though witnesses testify that it would have made no difference. The captain’s final act is tragic and I could have almost held the tears back at that point had the last ten minutes of the film not shown actual footage of the real rescue efforts at the time and focused on the real survivors, 70 years on, telling their own stories in their own words. I lost it completely and sobbed my heart out at the futility of it all.

So my recommendation is this - watch the first half of the film because you have to and watch the second half because you really, really need to.