The Trial of a Time Lord - Interview with Colin Baker 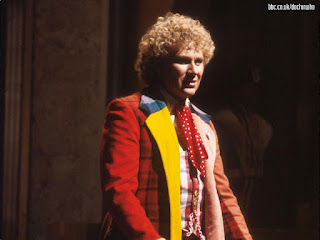 Ever wonder what The Sixth Doctor thought about The Trial of a Time Lord? Thirty years on from the finale, Barnaby Eaton-Jones interviews Colin Baker about his final season on TV as the Time Lord...

Barnaby Eaton-Jones (BEJ): Colin, hello! I’m so grateful for this interview, as we celebrate the 30th anniversary of The Trial of a Time Lord. If you’ll excuse me, I’m going to dive right into quizzing you. Firstly, I notice that the Doctor's relationship with Peri seems to be a much warmer one at the start of 'Trial' - was this something written into the script, or just something you wanted to happen because of your friendship with Nicola Bryant?

Colin Baker (CB): No it wasn’t written in at all, but Nicola and I decided that we wanted to ‘move on’ from the relationship we had in the first season which was characterised by her whingeing and me hectoring and being intolerant and loud. The previous season had ended with a promise of better things and we decided to do that by delivering the lines (which were still written – a little lazily we thought – in the same vein as the post regeneration season) in a more light and almost teasing way rather than confrontationally. Then the writers began to pick up on that eventually and the less irritating relationship blossomed. But we initiated and nudged it.

BEJ: In the 'Trial' courtroom scenes, your verbal sparring with Michael Jayston's Valeyard and Lynda Bellingham's Inquisitor was a proper acting class - ranging from insults to arguments to shock and horror and via humour. Were those scenes all recorded together and had you had much time to rehearse beforehand?

CB: We rehearsed as normal. In those days everything was rehearsed for about a week and the programme was then recorded over a day and a half in the studio.

But in order to get rid of the Trial set all the trial scenes were recorded in one go – which accentuated for us the repetitive nature of the dialogue between The Valeyard and the Doctor – which was frankly a tad puerile and irritating when viewed consecutively. So we were called upon to find ways of delivering the script without that being too apparent. Of course in the hands of my good friend Michael Jayston and dear, much missed Lynda Bellingham the script had a much better chance of being acceptable. They were both lovely to work with and peerless in their skill and creativity.

BEJ: Were you aware of behind the scenes problems towards the end of filming or was the atmosphere on set a jovial one?

CB: No idea at all that there were behind the scenes shenanigans. The atmosphere was always positive and energised. One thing I was determined to deliver as ‘lead actor’ was a constructive and fun working environment. And I like to think that in the main we managed to engender that. We were aware that something was amiss when the final two episodes were not forthcoming and we got a new script from Pip and Jane Baker to replace the one that John Nathan Turner has asked Eric Saward to change and he wouldn’t. But all that detail became apparent afterwards. We were protected from the bad atmosphere by JNT – thank goodness. Work is hard enough without having to deal with a bad atmosphere. And we were unaware of the angst until afterwards. Pip and Jane did a brilliant job – and I loved their script.

BEJ: For many fans, The Ultimate Foe is a grand finale for a linked season and its surreal nature held up as Doctor Who firing on all cylinders. Do you think, if you'd carried on as the Sixth Doctor, a re-match for the Valeyard and Old Sixie would have been on the cards?

CB: Yes I’m sure it would and indeed I have encountered him a few times now in Big Finish audios which have brilliantly extended this strange and twisted relationship between the Doctor and a fractured version of himself bent on replacing the inherent goodness of the Doctor with his envious malevolence. And I loved the surreal nature of the story. It reminded me of the Sapphire and Steel series years ago – which in my opinion is a good thing. I love paradox and twisted realities. 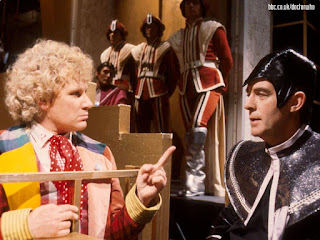 BEJ: What's your first memory that springs to mind for each of the four stories: (a) The Mysterious Planet, (b) Mindwarp, (c) Terror of the Vervoids and (d) The Ultimate Foe?

CB: (a) Being stoned by overenthusiastic extras whose aim was considerably better than I would have liked and whose vigour was similarly excessive. And the joy of Sabalom Glitz as portrayed by him of the parallel sideboards, Tony Selby.

(b) Nicola’s superb demise and the battle to discover whether the matrix was lying, whether I was affected by the Mindwarp or whether I was pretending to be cruel to Peri because I knew I was being watched. In the end, when no one appeared to know or care, I opted for a lying matrix and could therefore go for broke. And ‘Vroomnik!’ of course – delivered by Brian ‘Yrcanos’ Blessed.

(c) The Vervoids. Really??!! What was that about? Working with the wonderful Honor Blackman who is a legend. And meeting up with my old friend Bonnie Langford. Also the Carrot Juice exit which has now been mercifully replaced as my final exit line by the superb creativity of Nick Briggs at Big Finish, when David Richardson persuaded me to record The Last Adventure – which was a wonderful and moving quietus for Old Sixie.

(d) The Ultimate Foe was my favourite segment for the reasons mentioned above. I love it when Time Travel and reality form an integral part of a story.

BEJ: As the Sixth Doctor evolved, it's clear to see a change happening during the 'Trial' series, as you always said you wanted to develop and evolve his personality as time went on. Fortunately, Big Finish allowed you - with more stories - to get where you wanted to be with the role. How closely do you work with the writers and directors of your work at Big Finish, to ensure your character doesn't regress or, indeed, fits into the right timeframe?

CB: As I have indicated above I owe any rehabilitation that Old Sixie has acquired to Big Finish who have given me endless opportunities to develop his persona over more time than I was given by the BBC. The combination of consistently talented writers and the will to create a more multi layered persona have enabled me to show where the Sixth Doctor might have gone but for the fickle finger of fate that showed me the early exit. I am in their debt. I didn’t work with them that closely ahead of each script but merely had an early conversation with Gary Russell initially and then Nick and David saying what I had hoped might be forthcoming for my Doctor when the effects of Regeneration diminished and allowed him to become himself again. Otherwise I trusted them to deliver. And I was right to do so. He was still sometimes impatient and arrogant but sometimes that was a cover to distract from his underlying clarity of purpose – much as the Second Doctor would present the image of a harmless buffoon in order to achieve his objectives. Again when the scripts arrive there are still occasional minor lapses which we amend as appropriate. But that is quite rare.

BEJ: For me, the template of the 'Trial' season really fitted well and, although it meant you lost stories that you've come to realise with Big Finish, were there any plans discussed for the next season after 'Trial'?

CB: Well, I thought the Trial template was an error, actually. Reflecting what was actually happening to the programme itself seems now to me with benefit of hindsight to be a risky strategy that didn’t really pay off that well. But without it we would never have encountered the Valeyard, so it wasn’t all bad.

After ‘Trial’, I was aware of the existence of a story the following season with the Autons and was greatly looking forward to that and had read the Nightmare Fare coming back from America on a plane with John Nathan Turner when he showed me the first draft. As the Celestial Toymaker was one of my favourite former adversaries I was really looking forward his return too. Thanks to Big Finish it was an ambition I was to ultimately realise, I am glad to say.

BEJ: You brought an energetic, vibrant and strong physical presence to the Doctor, with the character front and centre (as I think it should be). Had you watched previous Doctors and thought of a way through their performances or did you go in to pre-production knowing exactly how you wanted the character to come across?

CB: Thank you. Yes I had seen all previous Doctors and seen how they as actors drew on their own personalities to some extent and merged themselves with the established role of the Doctor. I am only similar to Old Sixie in some respects and will leave those who know me well to decide what those elements are. I know I wanted to be ‘not a human being’, to be unexpected and seemingly intolerant at times, to behave in ways other than a 20th Century human would. But the underlying motivation should always be the greater good and compassion. I have always liked learning more about a character as a drama unfolds and to me the interesting characters are ones like Darcy in Pride and Prejudice whom the reader loathes when he first appears but love by the end. That is interesting writing.

BEJ: Is it true that your good self, Joan Sims and Tony Selby had some sort of eating competition on the set of The Mysterious Planet? If so, who won??

CB: Yes. We were all at dinner. It was a pudding eating competition. I am ashamed to say that I won. Three puddings. Tut tut.

BEJ: It's clear you're a fantastic ambassador for the series and for the role of the Doctor. How gratifying is it to have such a legacy within such an iconic show? Does you feel slightly divorced from it now, as you look back? As it is 30 years since your final televised season as the Doctor, if you were to do the 'Trial' all over again, what would be the major difference you'd make to it?

CB: Thank you again. I am very proud to have once been one of the now dozen actors who have fleshed out our Gallifreyan hero. I am in awe of the talent of the other eleven so am quietly proud to be numbered among them. I still feel as much a part of the Doctor Who Family and mythology as I did thirty years ago and look forward to feeling that way in perpetuity. If I were to do Trial again – I might ask for some rewrites now I am older and wiser and realise that that is what some other actors do – but the problem wasn’t as much in the writing at that time but in the attitude of the BBC in 1985 to its most successful product and the internal disagreements between the creative team and to some extent to the 1980’s zeitgeist. But basically it stands as it is – and as time passes it will settle into its true position in the programme’s history.

BEJ: Colin Baker, thank you very much for answering my grilling so eloquently and interestingly!