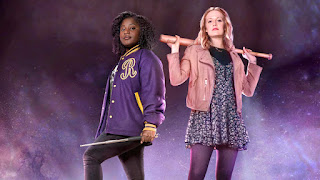 Marc Nash makes the move from Humans to demons as he watches the Channel 4 series Crazyhead...

So I was crash catching up on C4’s “Humans” as I missed the memo that it was back on our screens for series 2, when I was offered a trailer for “Crazyhead”. Not that I’ve seen “Twilight” or “Buffy”, mainly on account of me not having attended a US High School and not being terribly interested in the world of Jocks versus Geeks, but this seemed a British version that was rude, lewd and quite frankly had a bit of a potty mouth on it. So I thought I’d give it a try. And now I admit to it being my guilty secret.

Amy the eponymous ‘Crazyhead’ works in a bowling alley. She thinks she’s mad and gets treated accordingly by the rest of society, apart from her male BFF Jake who has a mad crush on her which he doesn’t disguise through a string of lewd comments that... er... slip out of his mouth in the way that a heavyweight boxer slips a haymaker punch out at his opponent. But she’s not mad at all, just she can see those humans amongst us who are demonically possessed. Fortunately she discovers a similar aged but older hand in the trade called Raquel, who goes around with an extendable metal truncheon cudgelling the demons back to Hell. The two hook up to fight demons and within the first five minutes of episode 1 Amy is squatting over her best friend for some golden-shower led exorcism, after some smart chat on who of them should do the deed. This is the level that the show is pitched on and it’s rather refreshing and pleasingly unsaccharine. (The show, not the golden shower).

Mind you, having said that, the emotions at the heart of the piece are about yearning to be loved. Both protagonists are straight, but there is more than a fizzing undercurrent of lesbian attraction between them. Their overarching need for love is made hard by their social isolation because of their perceived mental health problems, and it also makes them vulnerable to ne’er do wells who want to exploit it. Again, far from sappy and saccharine that the Yanks would inevitably have treated the subject matter. Throw in a fine Scottish-accented baddie (Tony Curran), whose day job is as a shrink which he wrestles to hold together given the extraordinary anger management issues of his own as a frustrated demon waiting to claim his inheritance of the earth, plus his sidekick demons who look like Metrosexual Nazis (until their true colours are revealed) and it’s all a perfectly satisfying good versus evil with burns and quips on both sides a plenty. There is a surprising (or perhaps not so given my limited comparative frames of reference) amount of the two young leads being shown stripping down to their bras and panties, but then they also jump into penguin and cow onesie pyjamas, which instantly cuts you off at the knees from any possible perving.

From perving to pedantry, as the one let down for me was the world in which this yarn takes place. The demonology was never satisfyingly established to my mind, which to an ex-Dungeon Master is irritating beyond belief. What there was tilted its hat at Christian devil iconography, but these demons on earth were pretty feeble really. They got pasted by a couple of punches easily enough. Rope bindings were enough to render them without threat. Basically they were just humans with evil intentions but little means of expediting them. The stronger demons were able to kiss you and render you inoperative for all of say 10 minutes. But that was about it really. Oh and they threw in a revenant for good measure. So the logic was all a bit hokum, but there again I suppose most of you aren’t watching for the logic and epistemological accuracy. But if the sight of a couple of girls kicking and bludgeoning the (un)holy crap out of a guy is your sort of thing, you’ll love this. Right on Sisters, in a not very right on sort of way.