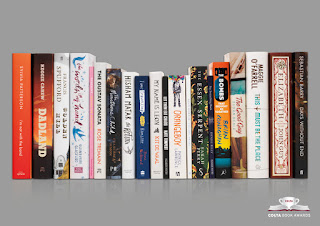 The Costa Book Awards 2016 winners in the First Novel, Novel, Biography, Poetry and Children’s Book categories have been announced...

The Costa Book Awards is the only major UK book prize that is open solely to authors resident in the UK and Ireland and also, uniquely, recognises the most enjoyable books across five categories – First Novel, Novel, Biography, Poetry and Children’s Book - published in the last year.

Originally established in 1971 by Whitbread Plc, Costa announced its takeover of the sponsorship of the UK's most prestigious book prize in 2006. 2016 marks the 45th year of the Book Awards.

The five winning authors who will now compete for the 2016 Costa Book of the Year are:

· Francis Spufford, known for his prize-winning non-fiction, collects the Costa First Novel Award with his first work of fiction, Golden Hill - an historical novel set in New York in the winter of 1746 - which the judges called ‘captivating and dazzlingly original’.

· Irish novelist and playwright Sebastian Barry, who wins the Costa Novel Award for the second time for his seventh novel, Days Without End, set in the wars (Indian and Civil) of 1850s America. Barry won the Costa Book of the Year in 2008 with his fourth novel, the bestselling The Secret Scripture.

· Debut non-fiction writer, Keggie Carew, takes the Costa Biography Award for Dadland. Part-detective story, part-memoir, part-history, it tells of her race against time as her father, Tom Carew, slips into dementia to uncover the truth about his colourful life. Member of an elite Special Operations Executive unit, the Jedburghs, in the Second World War, the Times of India called him ‘Lawrence of Burma’, he collaborated with General Aung San, father of Aung San Suu Kyi, and was awarded France’s highest military honour, the Croix de Guerre.

· Multi-award-winning Devon-based poet Alice Oswald now adds the Costa Poetry Award to her repertoire for Falling Awake, a collection of poems which explore life’s losing struggle with the gravity of nature which were written to be read aloud.

· YA writer, Brian Conaghan - who originally received 217 rejections before finding a publisher and an agent - wins the Costa Children’s Book Award with his third novel, The Bombs That Brought Us Together, the story of two friends, one shed, a war and a terrible choice.

“We’re very proud and excited to be announcing this year’s Costa Award Winners, a collection of terrific books,” commented Dominic Paul, Managing Director of Costa. “Five wonderful reads and something here for all readers’ tastes - just what the Costa Book Awards are all about.”

The five Costa Book Award winners, each of whom will receive £5,000, were selected from 596 entries and are now eligible for the ultimate prize - the 2016 Costa Book of the Year.

The winner, selected by a panel of judges chaired by Professor Kate Williams, and comprising authors and category judges Nicci Gerrard, Charlotte Heathcote, Matthew Dennison, Kate Kellaway and Cressida Cowell, joined by Graham Norton, Sian Williams and Robert Bathurst, will be announced at an awards ceremony hosted by presenter and broadcaster Penny Smith at Quaglino’s in central London on Tuesday 31st January 2017.

The winner of the Costa Short Story Award – voted for by the general public and now in its fifth year - will also be announced at the awards ceremony. Voting is open until Friday 13th January until which time the identity of the three shortlisted authors remains anonymous.