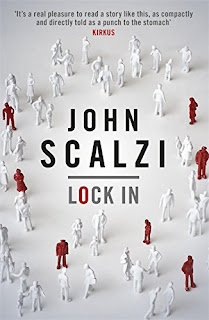 You need more? Okay then. In a near future United States of America the President's wife is one of the victims of a disease epidemic that leaves millions of people with Locked In Syndrome. Since she was a high profile victim of the disease, something finally gets done to help those who suffer with Haden's, named after the First Lady, and life becomes liveable for the good people in the various stages of the disease. There are sufferers with full Locked In Syndrome, like our main protagonist F.B.I Agent Chris Shane, who has pretty much been the poster boy for Haden's since he was a child. Chris' father was a world famous basketball player before Chris contracted the meningitis strain that left him Locked In, when he became a fundraiser for treatments and is now running for a seat in the US Senate. Other victims of the disease were just lucky I suppose, like Chris' partner Agent Leslie Vann as, whilst she had contracted Haden's during the outbreak, she avoided the Locked In part allowing her to become something called an Integrator, someone whose mind and body can be borrowed by those with Locked In syndrome for a while.

Chris moves around the physical world in a Threep, basically a moving computer. Using neural pathway software Chris can download himself into a threep and interact in a relatively human way, leaving his physical body being cared for at home by nurses. A murder/suicide mystery on Chris' second day at the Bureau leads into a thrill ride that incorporates politics, conspiracy, the Navajo Nation, the way medicine is run in the United States, and deeds and decisions that will affect the Haden’s community forever.

John Scalzi has created a narrative about today's modern world and the way we treat those with illness and disability, the way money will always mean power, and yet at the same time has written an epic detective tale. The entire description of a world gripped by Locked In Syndrome is entirely believable, even to the point where their mental community hideaway, The Agora, is basically Twitter but in your mind. The action and conspiracies are so well laid out you cannot help but be gripped and the characters are all developed and likeable, even those that maybe shouldn’t be liked.

This is Philip K. Dick, Isaac Asimov influenced sci-fi that manages to stand alone as a superb thriller in its own right and it is an absolute pleasure to read a book that involves a disease epidemic and doesn’t spend the next 300 pages being all about killing Zombies.

There will not be many better books than Lock In written for a while.