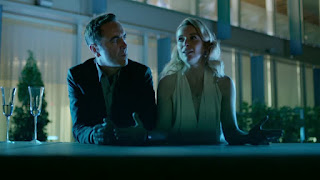 Watch the trailer for the second series of Stan Lee’s Lucky Man coming to Sky 1 next month...

In the 10 episode crime drama series, which kicks off on Friday 24th February at 9.00pm, James Nesbitt reprises his role as Harry Clayton, the London-based murder detective struggling to come to terms with his gambling addiction and still reluctantly wearing the lucky charm attached to his wrist in series one. With the help of his partner, DS Suri Chohan (Amara Karan), Harry’s job is to solve particularly puzzling murder cases – while refusing to use his new-found ‘power’ to assist him in any way. However, after a chance meeting with the enigmatic Isabella, everything he thought he knew about the bracelet is turned on its head.

Other returning cast members include Eve Best, Sienna Guillory, Steven Mackintosh and Darren Boyd.  Joining series two is Dutch actress Thekla Reuten as Isabella, a mysterious temptress who has more than a passing interest in DI Harry Clayton and the ancient bracelet that appears to bestow him with good fortune. Also joining the cast are Conleth Hill, Jonathan Aris and Matthew McNulty.

Watch the new trailer below.

Series 1 comes out on DVD on 6th February