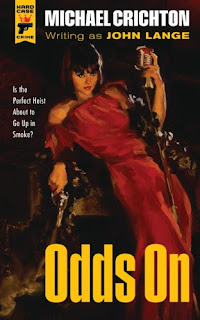 They thought their daring hotel robbery scheme was airtight, but three men are about to learn that nothing is that simple at the Hotel Reina . . .

To rob the finest resort in fascist Spain, three Americans need to blend in among the Mediterranean elite. And to do so, they will each need a gorgeous girl as cover. They find a depraved millionaire, a drug-addled nymphomaniac, and an assistant hotel manager who enjoys mingling with her handsome guests after hours.

The would-be thieves have used an IBM supercomputer to plan the perfect heist. Their crime has been calculated to the last detail, with every possible contingency planned for, save one: the women. The Hotel Reina is crawling with femmes fatales, and these crooks will be lucky to escape with the shirts on their backs.

What you have to get to grips with when reading this novel is that it was originally written in 1966 and has not in any way been modernised and, whilst I love the old school feel of Odds On, the patience required to get your pay off, I realise, won't be for everybody. The story centres around a group of thieves and their meticulous plan to rob an isolated hotel in Spain room by room. Just like the plan, the story itself is slow paced and detailed and is a really nice change on the fast paced tense novels of later years.

The plan has been worked out by a computer to take into account all the variables. But this is 1966, it is a tale of punchcards, this is twenty years before the BBC micro, so anyone expecting some kind of hi-tech plan based on the laptop or tablet they own will be sorely disappointed but, if you think about what you love about the old Connery Bond movies and transpose that to your novel reading, it is a quirk you come to enjoy.

What you get in the end is a well played out twist in the story, a variable not even a 1960's super computer can work out, and a great little crime novel reminiscent of the stories you got free with comics and magazines 30 years ago. I really enjoyed the change of pace that was so much slower than the books we get to review nowadays and just wish I'd been sat on a beach reading it. It really did feel like a holiday book but if I had actually been on a beach reading it, I may have tried to rob the hotel I was staying in, so probably best I was sat in my office.

If you want something different to the fast paced technology filled crime thrillers of the modern day you could do a lot worse than this very interesting caper.