Comics - Did You Hear the One About...

What’s black and white and read all over? The Penned Guins are soon to be back in book form and we can EXCLUSIVELY reveal the cover art thanks to Alan Henderson...

It’s no secret that we’re fans of the 3-panel punsters The Penned Guins here at The DreamCage and Susan Omand has reviewed several of the comic books here in the past (read her reviews for Melting Pot, We Waddlers and The Sunday Postings.) Imagine, then, her joy at discovering that the first 500 comic strips of monochrome merriment are being collected into a Treasury edition. That joy was compounded when she found out that the Kickstarter funding the printing of the Treasury has reached its target within the first two days. And now, we at The DreamCage are incredibly honoured to exclusively reveal the cover of the Treasury so, *drum roll please* Did You Hear The One About... 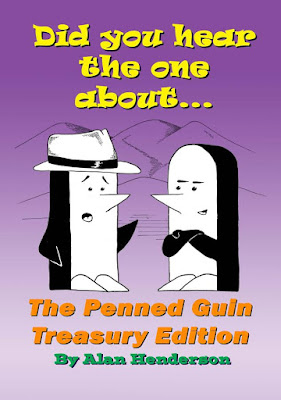 And... AND... The DreamCage gets a mention on the back cover too so, dear reader, you really HAVE to get it now! 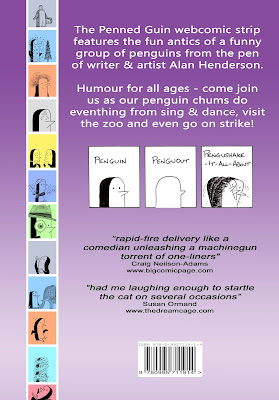 OK, so why, since it’s all funded to target and going to be out in the spring, should you still go and support the Kickstarter campaign? For a start, it’s a brilliant way to pre-order the book itself! For the princely sum of £10 you can guarantee yourself more than 150 pages (500 comic strips, 1500 panels, you get the idea) that will make you laugh or groan or, more likely, both as you delve into cracker-style jokes old and new and puns so bad they’re hilarious. Couple this with some very clever visual gags that, sometimes literally, think outside the box and you know there will be a treat in store.

Not only that, there are some more amazing “money (usually) can’t buy” perks on offer. Want to own the book AND the original artwork from one of the comic strips? Support the Kickstarter to the tune of just £13 and it’s yours. Not read We Waddlers yet? (Why not?!) Get it added to the pile of goodies (along with the Treasury and the original art) for just £19. Finally, if you’re very quick off the mark, because there was only one left when we checked, spend £34 and get the ultimate gift for the Guin-o-phile in your life, their very own, one of a kind, commissioned comics strip.

See? Told you the perks were good.

The Kickstarter runs until 5th February so you don’t have long. Support it using the link below and find out more and read some more Penned Guin comics strips on their website.