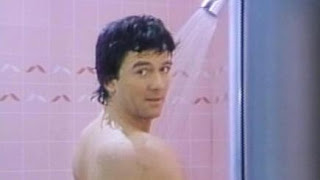 To celebrate all things dreamlike with rebranding of our site, Steve Taylor-Bryant goes into a shower. Or something. We don’t really know what he’s up to anymore…

Debbie does Dallas but as a dream What if? Nope, that won’t work, plus it’s a bit rude. Oh, hang on...

The whole of season 9 and the start of season 10 of Dallas from the 1980’s - possibly the most watched dream ever.

Dallas was a great soap opera, it’s exactly what soaps are supposed to be – a complete and utter fabrication of reality that is designed week on week to bring our addicted brains back to the source of our illness, television. For those of you that aren’t familiar with Dallas, it was a lavishly produced soap opera shot in the Texas city and followed the dysfunctional oil billionaire J.R. Ewing and his family through personal crises and shady business dealings. This was the ultimate eighties show as it highlighted all that we thought these money grabbing, greedy business types to be, as well as entertaining in a way that soap operas usually don’t do.

As with all soap operas though, the storyline is pretty much driven by the conflicts that happen behind the camera. You can pretend all you want that there is some grand scheme and everything is planned to a minute detail, but you would be wrong. Television soaps are a cesspool of greed, self loathing and disputes; and Dallas had them all. Larry Hagman and his control issues and hatred of women having too much power and screen time, producers arguing over who should do what to who, cast members having flings and affairs that backfired and cast members that were just bored.

When Patrick Duffy became bored he wanted to make sure he could never return, he wanted a sure-fire way that his character, J.R’s brother Bobby, was written out, so millions of us around the world tuned in to watch Bobby get mown down by a car. That was that, move on. The Ewing family grieve, J.R. talks to the casket before going on to do JR type things, Sue Ellen dries out from her alcohol addiction, Pam remarries and the world forgets who Bobby Ewing was.

Problem though. Larry Hagman butted heads with other producers, as he missed working with Patrick Duffy and won. Patrick Duffy found that life without Dallas was no picnic and wanted back. But how would they do it?

I’m not sure I had ever seen a reboot before. They are common place nowadays, and I suppose regenerations in Doctor Who count. I don’t think I had ever seen a non-Doctor Who reboot before, and I was 12 I think at the time of Bobby’s comeback so old enough to understand that my mums favourite soap opera had perhaps crossed into the realms of science fiction and whilst I prefer the ‘Evil Twin’ scenario in writing this even I see how dumb an idea that would have been.

Pam awakes to the sound of the shower going, her husband Mark we the audience think. She opens the shower door to a smiling Bobby… Aaaaannndddd Cliffhanger.

Not even Victoria Principal (Pamela Ewing) knew about it, the production team hadn’t told the cast anything. She was expecting the season to end with her husband Mark dead in the shower somehow, murder most likely, and the first she knew of Patrick’s return when she watched the episode. The actual scene of Patrick Duffy saying “Good morning” in a shower was an unused commercial the producers still had.

So how did this particular cliffhanger resolve itself? Episode 223, Return to Camelot (or Return to Camelot Parts 1&2 if you got it as two episodes instead of the two hour special originally broadcast) started out with Bobby, still in the shower, asking “Pam? Honey, what’s the matter? You look like you just saw a ghost.” Pam explained that she had had a nightmare, dreaming that Bobby was dead after saving her from a car crash and she had remarried, that Sue Ellen had quit drinking, pretty much the whole plotline from the last series. To which Bobby answers, “None of that happened...”

Yes, literally everything we had sat through the previous year hadn’t happened. It had all been in Pam’s imagination, the slate was wiped clean and it’s all Patrick Duffy’s wife’s fault as the dream idea was hers.

I feel dirty, I am off for a shower…