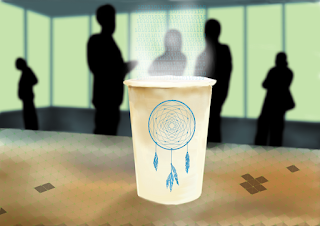 Our Dream Day inspired our writers not just to write reviews but send us some fiction too - this is a short story called Deviant, Suggestible, Creative by Neil Vogler...

Leroy tells me they’re putting something in the employees' coffee and stealing all our dreams. When I ask him politely what the hell he’s talking about, he explains that the coffee is laced with a strain of patented neuro-active nanites that, once absorbed into your body, can enter your brain, read your mind, uncover your dreams and then broadcast those dreams to a secure location, where they’ll be kept for all time in a searchable government database run by a crack team of scanners and specialists.

Leroy has personality, I’ll give him that. And he does make break times more entertaining.

‘Okay,’ I say, spreading my hands and shrugging. ‘But really, what’s the point?’

Leroy’s puffy face becomes seriously animated. ‘The point? The point is that they’re harvesting ideas, man. They’re sucking up raw, unfiltered creativity at the source, and denying you access to that most personal of all things: your dreams. All the stuff that makes your soul sing. The very essence of what makes you you. That’s what they want. That’s what they’re hoovering up.’

‘Yeah, right, you doubt me. Just answer me this, Con: since you started working here, can you remember a single dream you’ve had?’

I’m about to tell him that I’ve never been the sort to dream much anyway when the klaxon sounds, and everybody automatically stands up and starts drifting towards the entrance to the shopfloor.

As everyone else files in through the entrance, I stay at the table and finish the rest of my coffee.

Next break, Leroy’s back, this time munching a packet of beef flavour crisps and swilling tea. Then, between intermittent bites and sips, he lights up a cigarette. Eventually he gets quite a rhythm going.

‘Can’t believe they let us smoke here, in the canteen,’ he says. ‘Surely it’s illegal.’

I grin. ‘Same with everything in this place. Not quite as it should be.’

‘Your tea not laced with that nanite stuff too?’

At this, Leroy smiles lopsidedly and holds up his cup. ‘No way. This is my own brew, Con. Came out of a thermos, from my very own home, filtered and pure.’

‘Just enlighten me, I’m curious. So they’re stealing our dreams. Once the government have them, what then?’

‘What then?’ his chunky but amiable features twitch, and he puts his cigarette down in a circular silver ashtray. ‘They have algorithms crawling the dreampool, looking for the germs of ideas, for innovations that the dreamer isn’t even consciously aware of yet. They also look for signs of subversion and deviancy, screening our dream output for revolutionary thoughts and images. The ideas and innovations are theoretically matured by specialist programs, and those that show promise are released down the line as state-sanctioned developments. Destructive innovations are prioritised, of course. I mean, shit. That’s why we have some of the best weapons in the world to sell.’

I blink. ‘And what about those deviants and subversives they’ve discovered?’

Leroy makes a sort of Psssh sound. ‘Monitored, at best. Sometimes they’re befriended by covert state influencers and manipulated or coerced into servitude. At worst, they’re disappeared, with the disappearances made to look like accidents.’

I laugh at him. ‘Jesus, Leroy. You make the serious paranoids I’ve met look laid back.’

‘It’s the truth,’ he insists, a faraway expression suddenly on his face. ‘I know it.’

A smirk stays on my lips. ‘Pass me one of those cigarettes, you weirdo,’ I say.

The klaxon bursts into life, and Leroy jerks up in his seat. Back to the grind.

Leroy doesn’t know, of course. At least, not consciously. None of this is real. None of this is happening in what he knows as the ‘real’ world. This isn’t an authentic canteen. Shit, if he looked up, if it occurred to him and he let himself see it, he’d realise there isn’t even a roof. There’s just the visual representation of the dataflow.

You see, Leroy’s right. About most of it, anyway. They are stealing and monitoring people’s dreams. They are mining them for ideas and innovations. They are screening for signs of deviancy.

I mean, what rational government with the means to do so wouldn’t?

Leroy? He’s been deemed DSC, or Deviant, Suggestible, Creative. And with DSC candidates, they handle them efficiently. They simply put them in a specially-induced medical coma, pump them full of a patented neuro-cocktail, and make them dream 24/7 until their brain fails. Normally, because of the strength of the wildly potent drugs involved, it takes two weeks before total shutdown occurs.

And me? My name’s Con. It’s not short for Connor, as Leroy thinks. It’s Convincer. I’m a Convincer program. I sit inside the subconscious and converse with Leroy anytime his mind falls out of the dream state and threatens to try and order itself.

It’s a funny thing. We’ve found that the way to keep DSCs dreaming and harvestable is to present them with someone who sceptically listens to their paranoid-sounding conspiracies. By virtue of my reassuring presence and continuous questioning, I reinforce his view that this is an authentic place, and the conspiracy he imagines is going on somewhere else, and is not happening to him. Then he goes back to work on the ‘shopfloor’, and dreams himself to death as fast as we can arrange it.

He’s given them quite a bit, Leroy. He had some streaks of genius, apparently, layered in underneath all those levels of awkwardness and neurosis.

It’s funny. Even the idea for my own program’s existence was harvested from a human’s dream. Without the process, I wouldn’t exist, and we wouldn’t be able to do what we do so efficiently.

Human minds. You are all strange, and wonderful, and creative, and oh so terribly easy to fool.