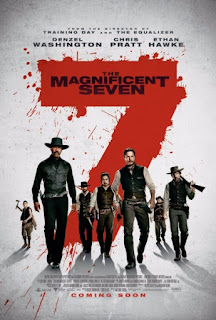 Steve Taylor-Bryant earns his spurs by watching the remake of The Magnificent Seven (slight spoiler)...

The problem with remakes or reboots isn't necessarily the product we end up watching, it's more the studio executives audacity to change something we are emotionally connected to. The Magnificent Seven is no different in this regard. The Yul Brynner, Steve McQueen and Charles Bronson 1960 western is regarded by many of us as a classic film that set the bar for all westerns to hit. It's also over half a century old, we've watched it a million times, it's seeped into our love. How do you recapture that for a new generation? Well, time will tell if we have but the new version certainly gives pause for thought.

From the epic landscape, the marvellous cinematography and the familiar soundtrack, the film starts and my wariness that I'm watching a reboot dissipates. Before the credits rolled after the opening scene I'd forgotten I was supposed to be writing a comparison piece. I was just sitting stunned at the beauty that was unfurling on my screen. Antoine Fuqua's direction of a fantastic screenplay by True Detective's Nik Pizzolatto and Richard Wenk hit every target I want in a film and, more importantly, a western.

You know what you are going to get with Denzel Washington and his portrayal of Sam Chisolm was as perfect as you would want. The inner turmoil of Goodnight Robicheaux was a pleasure to see play out and Ethan Hawke is once again on form. Byung-Hun Lee and Manuel Garcia-Rulfo as Billy Rocks and Vasquez respectively aren't actors I'm all too familiar with, but would certainly watch again on the back of this film, and Martin Sensmeier as Red Harvest was delightful, playing a little humour into his ostracised character. Which brings me to the last two cohorts who pleased me immensely for different reasons. We need to talk about Chris Pratt. He's good, don't get me wrong, I am a fan, but he has the ability to only play Chris Pratt and I was incredibly worried he'd be too funny as Faraday, too much the prat(t) if you will, but whilst he brought the expected light relief he also had an intensity in his performance I've not seen before so impressed me greatly. However, stealing the film by a wide margin, a film containing Washington and Hawke mind you, was Vincent D'Onofrio as Jack Horne. The bible quoting scalper with the high pitched and questionable accent was as supreme a performance as I've ever seen from an actor I've admired since Full Metal Jacket. I couldn't keep my eyes off him and was genuinely sad when he met his maker. Add in a great showing from Haley Bennett as Cullen, the widow that brings the seven together, and you have heroes on screen in a western like you haven't seen since probably the original band were put together.

A team of heroes is only ever as good as their evil counterpart though and I think Peter Sarsgaard is as perfect a piece of casting as you'll find in modern cinema. His Bogue was every one percenter you hate in modern times. He is the business man, the banker, the politician you wish rid of in your daily lives and I smiled with glee every time he appeared on my screen, best villain I've seen in a long time.

Add in real stunts, actual explosions and nifty fight scenes and you realise that maybe you have just watched a reboot. Not of a classic piece of pop culture but of an entire genre. This was western done well, like Hollywood used to do, and if it leads to more cowboy films made like this then the world will be better for it. Magnificent in every sense of the word.