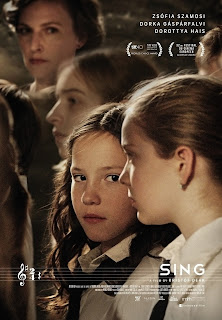 Do you think it would be fair if only the lucky ones would be allowed to be here?

Sing, or Mindenki as it is called in its native Hungarian, centres round Zsofi (Gasparfalvi Dorka) a young girl starting at a new school and trying to make friends. As she is shown round the school by the principal, they come across the choir, a famous award winning choir, practising their singing and the principal teacher encourages Zsofi to join the group because he is keen that everyone who wants to participate in activities should be able to. Liza (Hais Dorrotya) is one of the most popular girls in the class that Zsofi joins and soon starts talking to Zsofi, taking an interest in her. Liza, of course, is a beautiful singer and part of the choir too so, after the first practise that Zsofi goes to, which happens to be 10 days before a competitive performance, Liza chatters about how wonderful, caring and attentive the choir teacher, Miss Erika, is. Zsofi knows different though – not all school bullies are other children...

Firstly, do not be misled into thinking that this is a violent film, as I first thought it might be having read the synopsis, there is no physical maltreatment here. In fact, the premise of this film is an incredibly interesting one, throwing up a lot of questions for me and puts me in somewhat of a dilemma as I empathise with the viewpoint of the choir teacher, even though I guess I’m not meant to.

From my point of view, the choir teacher is lumbered with a choir anyone can join, at the insistence of the Principal, whether or not they can sing well. She also feels the pressure to maintain the choir’s “award winning fame,” so comes up with the solution that only the best singers in the choir will actually sing and those who are not quite good enough will mime. The not-so-good singers are still part of the choir with all the kudos that gives them, they still get to go to the concerts and they still get to enjoy the prizes when the choir wins, they just don’t make any noise when they sing. This is where the quote at the top of my article comes in. If only the best singers, the “lucky ones,” were in the choir, those that were less able would not have all the opportunities available to them so, this seems a fair compromise on her part if they are to keep winning.

This film sided with the unfairness of her decision on the children and their bid to “overthrow the establishment” by making a public mockery of their teacher at the competition. This plays out very well in the film and delivers the expected "fist-pump" exaltation that justice has been served but, in my mind, also smacks a bit of the bullied turning bully as they seek a vindictive revenge for their teacher’s decision which she may have made to deal with the circumstances she was given.

The three main actors in this were all strong, with a very believable friendship between the two young girls, once the clever misdirection of who the bully is resolves itself quite early on in the film. Szamosi Zsofia, who played Miss Erika, also played her part well, with the right level of sweetness, manipulation and belief that what she was doing was right. It was a brave move to make her show no contrition but I don’t think she should have got angry so easily at the concert, there should have been more confusion as to why the children weren’t “doing what was best for them” before the anger at being embarrassed in front of a crowd. As an aside, I also felt the other children at the school were a bit too sweet, friendly and well-behaved as a class, but that could just be because I’m comparing to my own childhood experiences.

Two more things I feel I need to highlight about this film. Firstly the cinematography is excellent; with a beautiful use of light, and a great eye for shapes and framing, it was a joy to watch. And, secondly, the film was also a joy to the ear as the close harmony singing of the choir really was stupendous and definitely award winning.

But the question remains. How far should you go to achieve your goals? Is it a case of win at any price? Or do you compromise what you do to achieve those goals enough to encompass your perception of the feelings and needs of others and justify your actions? Or should the compromise be one of lowering your own goals, because you will never attain them in the current circumstances without impacting someone else? It’s a tough one.