Film - The Way of Tea 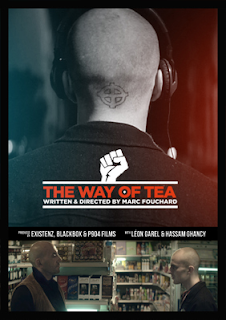 Susan Omand stops for a cuppa and watches the short film The Way of Tea (Les Frémissements du Thé)...

I don’t really know what it is about tea that soothes the soul so much. Maybe it’s the deliberate, almost ceremonial ritual of tea time or the fact that the making of it cannot be rushed, there’s an enforced time to stop and wait, a time to reflect, to step outside of the day’s hustle and bustle, while the leaves work their magic in the boiling water. In this case it’s the companionable act of sharing a glass of tea that comes to the fore.

This short film, in French with subtitles, centres around a young skinhead, Alex, as he crosses paths with Malik, a Muslim grocery shop owner. Young Alex is antagonistic, as he feels he should be against "an Arab" but unsure, creating a situation in the shop to try and strike fear into the heart of the owner but, instead of being terrified, Malik asks Alex to join him for a cup of tea. Caught off guard, and with the promise that, if he did, he could take away as many groceries as he could carry, Alex warily agrees and a fragile bond is formed over that drink that has wider implications.

This was a very clever film that relied a lot on the director and actors to deliver without much in the way of dialogue and this was a challenge that was expertly met. There was an air of incredible wisdom and calm self-assuredness about Malik, not quite a world-weariness because he was not resigned to his situation, more that he had just seen it all before and knew how to deal with it, and this contrasted beautifully with the spikiness of Alex, who went through a whole range of emotions, from arrogance, to anger and confusion to fear, as his own perceptions of the world changed around him. The film is rounded out by the other characters playing, deliberately, to stereotype and it was particularly notable to see how the attitude of one of the customers, Jose, changed in a matter of minutes. It was also a beautiful film just to watch, with stunning cinematography and use of camera angle, colour and light adding a richness to the narrative and, with an effective and understated soundtrack, creating an encompassing, almost intimate, atmosphere.

Only at the very end of the film do we get the information on the true story behind it, which sends the message that it needs to without interfering with the film or being either biased or preachy and, in essence, that message is that a lot of differences can be ironed out over the offer of a cup of tea.