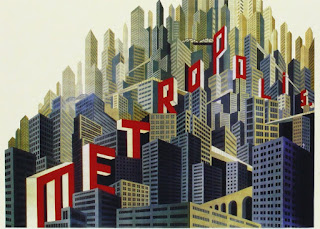 Steve Taylor-Bryant gets excited about a film to TV reboot...

I read some exciting news just before Christmas. It's here on Variety. Normally I'd just package it up as a news piece and move on. But it's Sam Esmail and he his rapidly overtaking Aaron Sorkin as my favourite screen writer so I dwelled on it, and dwelled on it, let it sink in some more, and then when my excitement hit peak levels I screamed into the sky. Sam Esmail is developing Metropolis for the television screen!

For those who don't know what the hell I'm on about Metropolis briefly explained for you...

Sometime in the future, the city of Metropolis is home to a Utopian society where its wealthy residents live a carefree life. One of those is Freder Fredersen. One day, he spots a beautiful woman with a group of children, she and the children who quickly disappear. Trying to follow her, he, oblivious to such, is horrified to find an underground world of workers, apparently who run the machinery which keeps the above ground Utopian world functioning. One of the few people above ground who knows about the world below is Freder's father, Joh Fredersen, who is the founder and master of Metropolis. Freder learns that the woman is Maria, who espouses the need to join the "hands" - the workers - to the "head" - those in power above - by a mediator or the "heart". Freder wants to help the plight of the workers in the want for a better life. But when Joh learns of what Maria is espousing and that Freder is joining their cause, Joh, with the assistance of an old colleague and now nemesis named Rotwang, an inventor, works toward quashing a supposed uprising, with Maria as the center of their plan. However, Joh is unaware that Rotwang has his own agenda. But if any of these plans includes the shut down of the machines, total anarchy could break loose both above ground and below.

It's 1927 and a fantastic work of fiction that was as ahead of its time as anything written by George Orwell was adapted for the screen by author Thea von Harbou and German filmmaker Fritz Lang. It's possibly one of the most perfect sci-fi films ever made despite it being a silent movie, which just adds layers of emotional depth, and was the film that led to Lang leaving Germany. Hitler and Goebbels were fans and offered the Jewish Lang honorary membership of the Aryan race, he fled to France immediately after the conversation. It's inspired so much in popular culture ever since, Superman creators to start with, but has never been successfully recreated.

Enter Sam Esmail, the genius mind behind this era's best slice of television, Mr. Robot, and his grasp of how the world underneath what we see actually works. When you are talking about a powerful utopia driven by an actual underground dystopia I can't think of anyone better to develop the idea, maybe modernise it slightly. I don't mean aesthetically as even though the film is nearly 90 years old it still holds up, I mean with language. Adding the words from the source material that you couldn't in the 1920's without destroying the legacy of both von Harbou's novel and Lang's screen adaptation is going to be a huge task that needs the kind of clever writer that can mix conspiracy, real life technology and hacking, and mental health issues like Esmail has done in Mr. Robot. The kind of wordsmith that can stand on the edge of the abyss and see not emptiness but beauty.

It's reported that Metropolis is a couple of years away as Esmail wouldn't want to run it alongside a third season of Mr. Robot and that makes sense for a couple of reasons. Firstly, it would definitely break my head and more than likely Esmail's, and secondly I'd like to see Mr. Robot finish for good after season 3. Now before you start hollering at me it's still my favourite television show but wouldn't it be great to go out on top? Enter, fuck shit up, leave...

Whatever happens I'll be on top of this news and I'll share my excitement along the way.