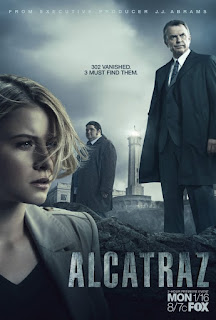 In a series of articles, Susan Omand and Steve Taylor-Bryant are going to remember the policemen, spies and criminal specialists that entertained them over the years. Today, Steve escapes to Alcatraz...

"The Rock" has been an obsession of mine for years. I loved the 1979 film Escape from Alcatraz with Clint Eastwood as Frank Morris, based on a true story, but no show or film since then has really come close to that for me. My entertainment bar when it comes to the world’s most famous prison is set very high. So it was with great excitement that I had been awaiting the 2012 TV series, Alcatraz, shown originally on Fox and repeated here in the U.K. on channel Watch.

Robert Kennedy, when he was Attorney General, ordered Alcatraz closed on the 21st of March 1963 due to rising costs and poor maintenance. This is where the show kicks in. Produced by J.J. Abrams Bad Robot Productions, the show states that this order was in fact a cover up, due to all prisoners and guards disappearing. Back in the present day, San Francisco Detective Rebecca Madsen has just lost her partner during the attempted arrest of a criminal and, during her next assignment, she stumbles across a secret. The murder investigation of E.B. Tilley gets taken over by a mysterious Federal Agent but not before Madsen hides a vital piece of evidence and carries out her own investigation.

A fingerprint belonging to a dead prisoner from Alcatraz appears and this leads her to Dr. Diego Soto. Now, normally in T.V. shows, experts of this kind are played by old, smart looking professor types, so it was really refreshing to see the character played as someone I could relate to, a geeky fan boy, just with a lot more knowledge than I possess.

The steps between the present day and the 1960′s flashbacks are incredibly easy to follow, which is just as well as there are many.

Prisoner 2024 Jack Sylvane is the first one being chased and the story takes you from his unlucky incarceration, which leaves you feeling sorry for him, to the fact he murdered a man called Barclay Flynn and took a key on behalf of someone else. Mysterious prisoner 2002 turns out to be Rebecca’s grandfather and also the man who had killed her partner.

The show is stunningly set in the Alcatraz backdrop, with historical tid-bits and subtle humour throughout. Sam Neill (Jurassic Park) is excellently cast as the mysterious Emerson Hauser, Detective Rebecca Madsen played by Sarah Jones (Sons of Anarchy) and Dr Diego Soto performed brilliantly by Jorge Garcia (Lost) have extraordinary chemistry on screen which keeps your mind away from the unrealistic storyline. Don’t get me wrong, that’s not a criticism, this is excellent popcorn entertainment if watched as just that and not as a historical, fact driven show.

The last quarter of the first episode does nothing to answer any questions in fact it leaves you with more. What happened to the 63′s? How much does Hauser actually know? Who was Sylvane working for? Where had he been? Who built the modern Alcatraz buried in the woods?

I had hoped that many of these points would be cleared up over a very long story arc, J.J. Abrams normally gets allowed time to reveal things in his own way, but the networks decided in their infinite wisdom to cancel Alcatraz after just 13 episodes. Which leaves me in a quandary. I want to advise you all that this show had the hallmark of being something great, that even within 13 episodes you can see just how wrong the network was. But I cant. You see it is so unfinished that these existing episodes are almost unwatchable when you know there will be no closure for you. At least when Firefly got cancelled you had something that still enjoyable to continually view, with Alcatraz, a show that started with so much promise, you are just left with a DVD of broken promises. What could have been the Sci-Fi equivalent of Prison Break unfortunately never gets the chance to take off.