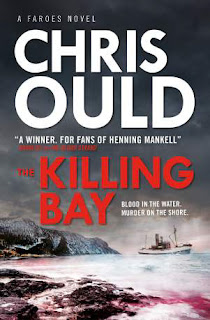 Susan Omand heads back to the Faroe Islands as she reads the second of Chris Ould's Faroes Novels, The Killing Bay, published tomorrow by Titan Books...


When a group of international activists arrive on the Faroe Islands, intent on stopping the traditional whale hunts, tensions between islanders and protesters run high. Then a woman is found murdered only hours after a violent confrontation at a whale drive and the circumstances seem purposely designed to increase animosity between the two sides.

This is the second book in Chris Ould’s Faroes Novels and follows on immediately from the events of the first, The Blood Strand. Although it doesn’t actually matter as the main stories are not connected, it is useful to have read the first book if you want to follow the chronology and pick up on the characters straight off because it doesn’t waste time back tracking through the previous story to get you up to speed. This decision, to my mind, worked because it doesn’t spoil the previous story if you haven’t read it. You get the general drift of the who, what and when anyway as the story goes along and that’s really all you need.

This time, the investigation in The Killing Bay doesn’t involve the English police detective Jan Reyna in the investigation nearly as much as in the first book, which lets the spotlight rest on the Faroese force and allows the characters of Hjalti Hentze and the others to be rounded out more than as the supporting cast they were previously. That’s not to say Reyna isn’t involved at all and he has his own side story in addition which, if I’m honest, seemed a little “tacked on” to me, however I tend to like my police procedurals to be about the investigation rather than the private lives of the people involved. I can see though that it may be necessary to keep him in the book series as a character, as his personal long story arc will likely carry on into future books.

That said though, this was a really enjoyable book, if a bit of a slow burn. However, that gives the characters time to develop and for the twisting plot to reel in the reader until the final third of the book when the tension and suspense of the investigation that has been slowly building explodes into activity. I was very pleased to see that the language, culture and scenery of the Faroe Islands took centre stage again in The Killing Bay. The way Ould depicts all of these, from the peppering of native language through discussions to the demeanour of the locals and the matter-of-factness in the way they approach life, shows that he has researched the islands and its people very well as it didn’t come across as clichéd when it so easily could. And the use of the island tradition of the whaling Grind (pronounced like pinned), and the clashes that provokes with animal rights protesters makes for a contrasting and fiery backdrop to events with so many ways for the plot to develop. Ould does well though not to come out on one side or the other of the arguments that he presents so the reader is never preached at and there is no political agenda, it’s just a really clever plot device.

This series of books is developing very well, with interesting characters and plotlines that tread that line of having enough depth while not being too difficult to follow, managing to build in unexpected twists that make sense after the event without requiring any leaps of faith. There are still several unanswered questions by the end though, which is great because that means there has to be another book so I can look forward to visiting these beautiful bleak islands again.