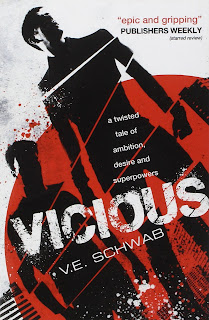 Steve Taylor-Bryant grabs a superhero book with a difference and reads Vicious by VE Schwab...

Victor and Eli started out as college room mates - brilliant, arrogant, lonely boys who recognized the same sharpness and ambition in each other. In their senior year a shared research interest in adrenaline, near-death experiences and seemingly supernatural events reveals an intriguing possibility: that under the right conditions, someone could develop extraordinary abilities. But when their thesis moves from the academic to the experimental, things go horribly wrong. Ten years later, Victor breaks out of prison, determined to catch up to his old friend (now foe), aided by a young girl whose reserved nature obscures a stunning ability. Meanwhile, Eli is on a mission to eradicate every other super-powered person that he can find-aside from his sidekick, an enigmatic woman with an unbreakable will. Armed with terrible power on both sides, driven by the memory of betrayal and loss, the arch nemeses have set a course for revenge-but who will be left alive at the end?

Vicious by V.E. Schwab dropped through the office mail box and, as it was a superhero book, I took it and refused to give it back. However this is not your usual 'Superman' type superhero book, this is a twisted, original, work of dark brilliance by an author I knew little about at the time and whose back catalogue went on order as soon as I finished reading.

Eli and Victor are friends and room mates at college and during the course of their studies for Science mess around with adrenaline amongst other things. It's very hard to explain what actually goes on without ruining your enjoyment when you read this book (and you will!) but basically superheroes are not born, they are created by near death experiences converting them to ExtraOrdinary Humans. The pay off is that those who end up with these powers are emotionally damaged and have part of their soul missing, almost as if, in those dying moments before this rebirth, a deal is struck with the devil.

An event occurs, which doesn't get explained until later in the novel, that separates Victor and Eli as friends. Victor goes to prison for ten years and Eli? Well, basically he plays God. Victor comes out of jail bent on revenge and is single minded in his aims.

The book starts with grave-robbing, the college parts are believable and the fact it is set in our world not some fantastical far off land or imaginary city really helps to grip you. The tension gets ramped up fairly early in the book and carries on throughout the story incredibly well. The secondary characters are formed well and fit into the tale telling as if they deserve to be there, a rarity nowadays, and the book is flawless in both style and content.