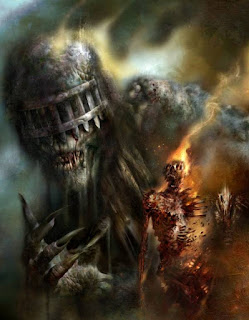 2000AD are to 'revive' the Dark Judges, with the follow-up to Dark Justice, in a new story Dominion, starting in July...

An Alien-style race-against-time Dark Justice saw undead alien superfiends Judges Death, Fear, Fire, and Mortis run amok on an ark ship full of colonists. Judge Dredd and Judge Anderson raced against time to prevent the mass murdering zombies from claiming the last survivors and at its conclusion Fear had been captured but Death, Fire, and Mortis were left floating in deep space.

Artist Nick Percival said: “I’ve always wanted to work with John and we’d talked about a few things when he then contacted me about doing a new series with the Dark Judges, following on from when we last saw them. It’s going to be a very dark, disturbing take on the characters. I did a few test pics of the Judges which inspired him to take the story in a certain direction – very spooky stuff and I’m hoping to put my own spin on these classic villains and try not to repeat visually what’s been done before with them. I see Judge Death as a truly terrifying character and the new environment (there’ll be blood and snow!) that we’ll see these creatures in should help give it an original look. John’s scripts are great and it’s fantastic to finally work with him.”

Originally created by John Wagner, Alan Grant and Brian Bolland in 1981, the Dark Judges are undead and unkillable Judges from another dimension where all life has been declared a crime. After being left fallow for years, they have enjoyed a something of a renaissance after Fire, Fear, and Mortis were freed during the epic Day of Chaos storyline. Not only did they appear in the Dark Justice story, released as a hardcover in 2015, but writer Kek-W and artist Dave Kendall have explored their origins in new, inventive, and horrifying ways in Dreams of Deadworld and Fall of Deadworld, stories which will be collected later this year.