Film - What if? Smokey and the Bandit 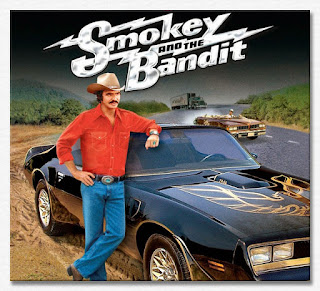 Steve Taylor-Bryant goes much further than just eastbound and down as he recasts Smokey & the Bandit...

We are getting remakes, whether we want them or not. I've enjoyed many whilst remaining sceptical of others but most hit the mark. 21 Jump Street was better than the television show, Denzel Washington has done a great job in three with The Manchurian Candidate, The Equalizer, and The Magnificent Seven. The Oceans films were fun, Oceans Eight looks well cast. CHiPS trailer made me laugh more than I wanted to so, as you can see, some if not most work well. Every time though it's down to the casting plain and simple. Inevitably some of our childhood favourites are going to be dragged into our adulthood kicking and screaming whether we are ready for it or not. The one I didn't want touched was Scarface but that's coming anyway and so the only film I have left is Smokey and the Bandit. They can't touch this classic surely? Chances are they will, so I've taken it upon myself to show them how to do it properly.

For those who can't remember Smokey and the Bandit (WHAT THE HELL IS WRONG WITH YOU) here's a synopsis from IMDb...

In the summer of 1976 "Big Enos" Burdette, a flamboyant Texan aspiring to political office in Georgia, needs a vast quantity of beer for a rally, but the brand of beer he wants is Coors which at this time cannot be legally transported across the Mississippi, and at least one attempted shipment has already been intercepted by police. To get this job done, Burdette recruits modern day moonshiner Bo Darville, nicknamed Bandit for his previous exploits, for a hefty six-figure payment. Darville in turn recruits his pal Cledus Snow and his eighteen-wheeler for the job, entailing driving from Georgia to Texas, picking up 400 crates of Coors beer, and returning to Georgia, all in a span of twenty-eight hours. To draw off the heat of snooping state police, Darville will drive interference for Cledus in a hot Pontiac Trans-Am, the two of them maintaining contact via citizen's-band radios and the seemingly bizarre lingo used within. The trip to Texas and loading of beer goes without interruption, but the trip back to Georgia begins to pick up complications when Darville is stopped by a runaway bride, Carrie, who is fleeing a forced marriage to the son of a full-of-himself Texas county sheriff, Buford T. Justice. Sheriff Justice's pursuit of his prospective daughter-in-law soon becomes an interstate high-speed pursuit involving police from four states and also the intervention of varied interstate truckers aiding Darville and Cledus as they close on Enos Burdette's Georgia bash.

We shall get to the main four, Bandit, Cledus, Junior and Sheriff Buford T. Justice in short order but let's cast the Enoses (Enosses? Enoes?) and Carrie first. 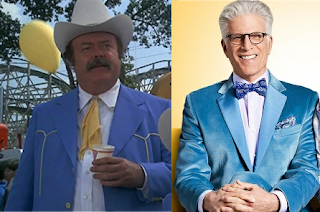 
I want a guy that can rock a hat and suit combination, still actually act and be highly watchable and be able to hit a joke or a punchline. Someone you could believe would goad and cajole our Bandit into taking such a risk with his freedom in the first place. So stepping into Pat McCormick's shoes as Big Enos will be Three Men and a Baby's Ted Danson.

Slipping into Paul Williams' slightly smaller shoes is a tough one for me to call. You take the 'little' quite literally and go for Peter Dinklage but that's too obvious so I'm going to use that age old twist of little meaning big and cast a wrestler who has surprised me with his acting ability and comic timing - Dave Bautista. 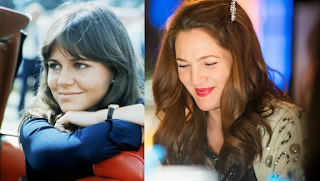 Carrie is another hard one to call. Wearing the wedding dress of the remarkable Sally Field is a proposition I would imagine many stars baulking at. Field is supremely talented as an actor, is incredible alongside Reynolds in the original and I genuinely can't think of a modern day Sally Field that would naturally fit the role. Therefore I'm casting based on something more primal. Men slightly older than me fell for Field as their first crush. Many of my older friends still talk about 70's and 80's Sally Field in a way that probably they shouldn't in a polite society. I'm going along similar lines with my casting of Carrie and asking my first crush to take the role - Drew Barrymore. 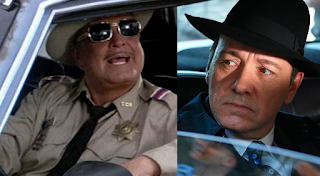 To the law now and the hardest member of the cast to replace. All my happy memories of this film, watching it with granddad, revolve around the legend that was Jackie Gleason. Gleason was THE lawman when I was growing up and he git the balance between funny and ability to act perfect. There aren't as many modern day stars that can do that, they are either very funny guys or Oscar worthy thespians but one man can bridge that gap. Kevin Spacey is known more for his serious roles and he is a sublime actor but he is also a naturally humorous guy. If you've ever seen him interviewed he instantly commands your attention with his anecdotes, his impressions (Al Pacino to Al Pacino made me cry with laughter) and his timings. Can he match or better Jackie Gleason? Who knows, but wouldn't it be great to find out?

Haley Joel Osment has worked with Spacey before in Pay It Forward and as soon as I had Spacey nailed on for the role of Buford the choice of Osment for his son was a simple one. 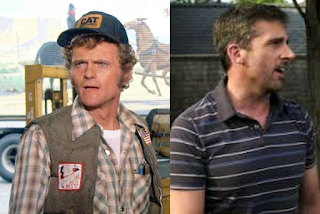 The Bandit's lorry driving cohort is essential to the film and Jerry Reed's portrayal was possibly, nearly, as funny as Jackie Gleason's Sheriff. I'm going for a guy I always find funny even things I don't really enjoy, Steve Carell. I just want to see Carell talking to Fred the dog if I'm honest. 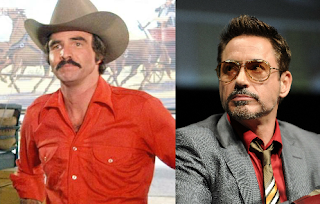 And so we finally get to the part made famous by the incredible Burt Reynolds. There surely can be only one man who can have facial hair, drive a sports car, crack some one liners and annoy just about everyone can't there? That's right. Robert Downey Junior.