Doctor Who - The Chase 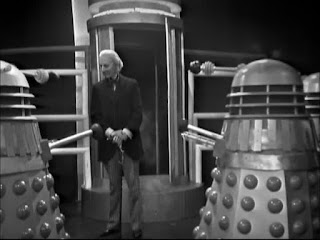 Our Doctor Who expert, Tony Cross, is journeying through all of time and space to bring us his thoughts on every available Doctor story. Today is the First Doctor adventure The Chase...


I tend to try and be positive when writing my reviews. Where there is benefit of the doubt I will find it but I am afraid I find The Chase a tedious mess. For me it is the worst William Hartnell story of my re-watch so far.

It is not all bad. It really is not. But a lot of it is. Episode 3 for example is the worst episode of Doctor Who since I began re-watching. I would show a non-Doctor Who fan any episode of The Web Planet rather than the third episode of The Chase, which features awful comedy, terrible direction and comedy Daleks. Terry Nation - and his estate - were (and are) known to frown upon writers who did not take the Daleks seriously but The Chase is a self-penned suicide note to the Daleks as a genuine threat in Doctor Who. From the moment one emerges from the sand - in a nod to the end of The Dalek Invasion of Earth Episode One - making sounds of struggle and effort there's a problem with the Daleks. Add one stumbling and mumbling over its answer to a question and their inability to spot that their First Doctor robot doesn't look anything like the actual Doctor and here we have Daleks as robotic dustbins. One of the Daleks even mysterious throws itself overboard whilst scaring sailors. Whilst another stands and listens to Morton Dill (Peter Purves) rattle on 'amusingly' at the top of the Empire State Building without even apparently considering extermination.

The plot of The Chase is pretty simple. The clue is in the title. The Daleks have a time-machine. They've tracked down the Doctor on the planet Aridius and try to kill him and the TARDIS crew there but they escape and the rest of the story is the Daleks chasing the TARDIS through time and space. Occasionally the TARDIS lands and tries to shake-off The Daleks before dashing off to the next place. This 'chase' takes in the top of the Empire State Building in 1966, the Mary Celeste, a haunted house in the Festival of Ghana and, finally, the planet Mechanus.

Aridius, which is a classic example of Terry Nation's unsubtle when selecting planet names. It's a arid planet. Therefore it is called Aridius. Except it wasn't arid initially. It was covered with water. Perhaps Aridius means 'Wet Sphere' in Aridian. Who knows. It isn't a big deal but it is one of those Terry Nation habits that just irritates me a wee bit.

The first two episodes are fine. Not the most exciting but reasonable. The third episode, as outlined above, is an utter car crash of awfulness. It's trying to be amusing but isn't. It's just plain stupid. The fourth episode is bizarre. The TARDIS crew themselves never know where they are. They make odd guesses, including the Doctor's really strange suggestion that they are inside the human imagination but it appears to be a castle out of fiction.

Frankenstein's Monster is there. Dracula is there. There's a Grey Lady. There's bats. There's thunder. Then the Daleks turn up and start trying to exterminate everything but one of them gets a bit of a battering from the Monster. Whilst it is all a bit...silly...it actually works for me better than Episode Three because the comedy in this episode works. There's a wonderful bit of work from William Hartnell for example when they first come across The Monster and it wakes up.

Then the TARDIS crew dash off and escape. Although they manage to leave Vicki behind. Yes, they leave Vicki behind. It just seems so unlikely, even in the rush and clutter of that fourth episode. Fortunately Vicki - although she's not at her best in this story - is made of stern stuff so she sneaks aboard the Dalek ship as it follows the Doctor. The Daleks are, of course, too stupid to notice. Even as she tries to contact the TARDIS via some kind of communications device.

Episode Four introduces us to the robot First Doctor designed by the Daleks to infiltrate the TARDIS crew and kill them. Alas in a bizarre directorial decision the robot looks nothing like William Hartnell, which isn't surprising as he's played by Edmund Warwick. Then they dub Hartnell's voice over him, before cutting Hartnell in at the beginning of Episode Five. Thereafter they use Hartnell or Warwick pretty arbitrarily. If I'm generous perhaps they thought that the use of Hartnell himself occasionally would make us forget that Edmund Warwick wasn't the real Doctor but fundamentally it doesn't work. At all.

By this time I was losing the will to watch more but fortunately Episode Six introduces us to the Mechanoids, which are huge unwieldy octagonal golf-balls who have built a huge city, which looks lovely in model form and await human settlers. More importantly we get introduced to Steven Taylor (Peter Purves) and his mascot Hi-Fi.

Who is a toy panda. Steven has been trapped on Mechanus for two years but it doesn't take long for everyone to escape, the Doctor to start the process of burning down the city and an epic battle between the Mechanoids and the Daleks. The result the city is totally destroyed and the TARDIS crew escapes losing Steven in the process when he goes back for Hi-Fi.

Then we come to best moment in the story. Ian and Barbara's departure. Yes, finally they're leaving using the Dalek time machine to go back to London, 1965. The Doctor is genuinely fuming and their argument along with Vicki talking him into letting them go is really well played. The fact that, apparently, Hartnell was genuinely upset at their departure definitely shows. Then we get a lovely bit of stuff as Barbara and Ian find themselves back in London before cutting back to the Doctor watching them. His, 'I shall miss them', seems very heartfelt. And thus it ends.

This has been a long article by my standards. I think that's because I really don't like The Chase except the fine departure of Ian and Barbara. I think Terry Nation's writing isn't great, the direction is careless and the Doctor robot is rubbish. As is Episode Three.

So I go back to my original thoughts. The worst Hartnell story so far. Alas.