Doctor Who - The Gunfighters 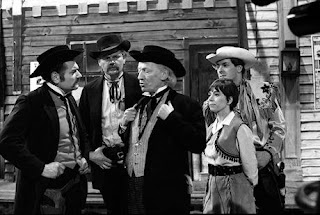 Our Doctor Who expert, Tony Cross, is journeying through all of time and space to bring us his thoughts on every available Doctor story. Today is the First Doctor adventure The Gunfighters...

In my article on The Celestial Toymaker I mentioned that fan consensus on that story had changed since I was a wee Doctor Who fan. Where once it was considered a creepy classic. Now it was seen as boring, studio bound and racist. On the other hand The Gunfighters has been making the opposite journey.

Once upon a time when Doctor Who fans didn't have access to so much material we relied on the wisdom of others to tell us what we were supposed to think of Doctor Who stories and one of those wise old men, who will remain nameless, called The Gunfighters the worst Doctor Who story ever made. This was clearly bollocks then. It's even more bollocks when you re-watch it.

The problem with The Gunfighters is that it is The Doctor being dropped into a parody and your tolerance of this story will probably be affected by three things: how much you like comedy in Doctor Who, how much you like Westerns and how much you like songs. If you're a serious-minded Western disliking music-a-phobe chances are this is not for you.

The key thing to remember about The Gunfighters is that it is a parody of the Western genre, which was in the late-fifties and early-sixties a mainstay not just of American television but also British television. Even into the seventies and eighties I remember visiting my Nan and there was almost always a Western on the television. I remember Nan loved Westerns. This was a time when there were only three mainstream channels and they filled a large chunk of their time with old films or repeats of programmes likeBonanza.

The real 'Gunfight at the OK Corral' or as it is referred to more realistically in a history book that I can't remember the name of 'The Fiasco on Fremont Street' is - possibly - the founding story of the Western myth. Those involved in it (and the later murder of Morgan Earp & the Vendetta Ride that followed) were to become central to film and American Westerns perhaps helped by the fact that Wyatt Earp himself lived to be advisor to Tom Mix, an early Hollywood cowboy star.

These names were familiar to TV audience in the UK as well as the US. It's one of the reasons I suspect the Sheriff in The Gunfighters was Bat Masterson and not Johnny Behan as was the case in real life. After all Behan had no TV series of his own and Masterson was the more familiar figure. The same applies to Johnny Ringo who took no part in the actual Gunfight at the OK Corral itself but is a suitably well-known figure to add to the story.

Television wasn't the only influence. There's films too. Films such as My Darling Clementine (1946) and Gunfight at the OK Corral (1957) being the two that clearly had the most influence, which brings me to the song.

Throughout The Gunfighters the action is chorused by a song, The Ballad of the Last Chance Saloon. It irritates a lot of people and seems out of place in a Doctor Who episode. I thought, first of all, that this was the result of Donald Cotton having seen Cat Ballou (1965), where Stubby Kaye* and Nat King Cole appear as 'shouters' who sing the 'Ballad of Cat Ballou', almost like a velvet voiced Greek Chorus. And there might be an element of truth in that but most obviously the same approach was used in Gunfight at the OK Corral (1957) where Frankie Lane song Gunfight at the OK Corral guided us through the film. It's worth watching to see how they used it (and also because it is an excellent film in the first place) and how The Gunfighters echoes it.

So the song might be out of place in a Doctor Who story but it isn't in a Western for which reason I'm happy to give it a pass.

The Doctor, Steven and Dodo find themselves in Tombstone on the eve of the Gunfight. It's bad timing and the main cast are totally oblivious to what's going on initially. The Doctor, whose toothache has kick started proceedings, goes to see a dentist. That dentist turns out to be Doc Holliday (Anthony Jacobs) who utterly bamboozles the Doctor and gets him to wander off to the saloon where Steven and Dodo are being bullied into singing by the Clanton brothers. It's worth noting that there's a not disimilar scene involving the bullying of a drunken Shakespearean actor in My Darling Clementine. Anthony Jacobs is superb as Doc Holliday, who really was - possibly - a gentleman from Georgia and dentist.

The Doctor's been set-up by Holliday who knows that the Clanton's are waiting for him at the Last Chance Saloon. Everyone now seems to think the Doctor is Doc Holliday and not Doctor Caligari as he himself told Wyatt Earp (John Alderson) and Bat Masterson (Richard Beale). The confusion lasts for two and a half episodes as Wyatt Earp plays along with the Doctor/Doc Holliday ruse as does Holliday's 'girl' Kate (Sheena Marshe) Although it is blown when Clanton ally Seth Harper (Shane Rimmer) gets gunned down by Holliday in front of Charlie the Barman (David Graham). Charlie can't keep a secret, which will alas cost him dearly when Johnny Ringo (Laurence Payne) arrives.

Hartnell seems to revel in the chance to do some comedy and his moment of glory is his "People keep giving me guns. I wish they wouldn't." In fact this story is pack full of nice bits around guns being pointed at people who don't want to have guns pointed at them. And Jackie Lane gets to actually do stuff as Dodo for the first time. The scene where she gets the jump on Doc Holliday is marvellous. Meanwhile Peter Purves gets to be his usually excellent self, even when singing badly in a ridiculous shirt.

O, I should point out that the American accents in this story are rubbish. Mostly. It's a contractual obligation when reviewing The Gunfighters. The only one who is really consistent is John Alderson's Wyatt Earp. Perhaps it is no surprise then that Alderson was to go on and have a pretty extensive career in US television, including more Westerns.

The Clanton brothers though have a set of accents so variable you'd demand a DNA test**. Meanwhile the Doctor is locked up for a bit, released and replaced in jail by a pistol-whipped***Phineas Clanton (Maurice Good) who is then sprung by his brothers who kill Warren Earp.****

We're leading up to the Gunfight but not before the Doctor tries to stop it by talking to Pa Clanton (Reed De Rouen). (Again there is a similar scene in My Darling Clementine) so the gunfight is doomed to take place.

I haven't got the space in this article to outline the actual history of the Gunfight - I'm going to do that in another article - but in reality the fight lasted less than a minute. It was - fundamentally - an arrest gone wrong. It's main cause a drunken, belligerent Ike Clanton but like almost every event in history one with longer, broader causes. In reality it was Wyatt, Virgil (who was the Marshall not Wyatt) and Morgan Earp with their 'friend' Doc Holliday who faced off against Ike and Billy Clanton, Tom and Frank McLaury and Billy Claiborne. Tom and Frank McLaury and Billy Clanton would die. There would be a trial but that would not be the end of it. Who was at fault and who fired the first shot are still argued about to this day. Different newspapers of different political leanings took up cudgels for each side. But as I said that's for another article, which is coming. Honest.

The Gunfight being over the Doctor, Steven and Dodo leave.

It's been fun. There are genuinely lots of laughs in this story, even as it takes a very, very dark turn towards the end. Hartnell is my personal highlight but the whole story is rather brilliant if you ask me and I'm inclined to ignore some dodgy accents in order to see it play out.

Is it Doctor Who's first proper parody? Or does that nod go to The Myth Makers? Also written by Donald Cotton it should be noted who can certainly turn his hand to comedy. It's one of my favourite Doctor Who stories of all time and I suggest if you've not seen it you do. You might not agree with me but I'm old enough and ugly enough to cope with that.

*Stubby Kaye who would later crop up in Delta & The Bannermen. The poor man.

**I know DNA has nothing to do with accents and I don't care.

***Gunfights were actually very rare in the West. Tombstone had strict rules on guns for example, which meant a lot of arrests were done by the officers of law & order using the butt of the gun without needing to fire it.

****O and Warren Earp didn't die then. He would make it to 1900 before being killed in an argument.