Documentary – Legends of the Knight. 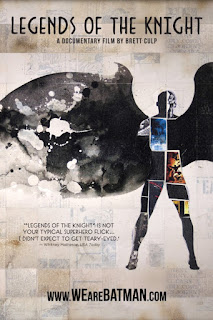 With the Lego Batman Movie now in cinemas, a reminder of just how inspiring the Caped Crusader can be in real life as Steve Taylor-Bryant watched the documentary Legends of the Knight...

When I was asked to review a Batman documentary I jumped at the chance. My favourite caped superhero? OH HELL YEAH! Little did I know at the time I would spend and hour and a quarter bawling my eyes out and wishing I had a fraction of strength of the people in Legends of the Knight. You see this isn't a documentary about making Batman, it's about how Batman makes us. Let me explain...

Brett Culp has put together a fascinating, very emotional film with Batman writers and artists, producers and incredible Batman art all as preludes to small sections of amazing life stories that all have a Batman theme to them. The whole film is set up by Batman executive producer Michael E Uslan (The Dark Knight trilogy amongst his many credits) explaining how he spoke to a group of cadets at Westpoint about to go off to war. We then get into Batman and the Bruce Wayne story as a folk tale, a Robin Hood story for our generation, inspiring people to be the best they can be. The problem with that statement is that, without proof, it's just a Batman love in. So Culp brings you bucketloads of proof. You will need to keep the buckets for your tears as it's not humanly possible to watch this without shedding loads.

From Captain Dave O'Leary of the Las Vegas Crime Unit using the morals of Batman comics to clean up his city, to Lenny Robinson, a self made businessman who dresses as Batman to cheer up sick children in hospitals up and down the United States, the folk legend of a hero is an ever present in our society.

Psychologists aplenty tell of the refuge sought in comic books and a great portion of the film shows Batman and other such characters being used by teachers, councillors and therapists alike as a way to get their students or patients to bond. To realise they are not on their own with the troubles they possess. Bullied children, kids who have had their parents tragically taken from them, like Bruce Wayne, find the comic book stories a comforting, less harsh way in to releasing their horrific burdens.

But this is not the emotional side of the film. A child with Leukaemia that fought it and won because Batman would have stood up to cancer, the father who lost his daughter in a snowstorm and found out a 19 year old High School student had organised search parties and handed out flyers, a man born with one leg and only three fingers on each hand that drew strength from the legend of Batman and overcame all the odds to win a dance competition, play basketball or raise a family.

Every story in this documentary is relatable in one way or another to its audience. I have been to 35 funerals in 30 years and suffer myself from mental health issues, so some of this film was like it was made just for me. I have always known that pop culture meant so many different things to people but to see its raw power in action is as humbling as it is uplifting. Brett Culp has managed to produce a film that not only holds the interest due to a superhero connection, but because he made it for me. And You. And You. It's not filmed in a general audience way like most documentaries. It doesn't just present its case and leave you to find out whether you agree or not. It puts its hand into your chest and grips your very essence and won't let go until you've consumed the good from its message.

It's the light in a dark time. Emotionally challenging. Powerful.


Follow Steve on Twitter @STBwrites
Legends of the Knight is available on iTunes, Amazon.com and Netflix US