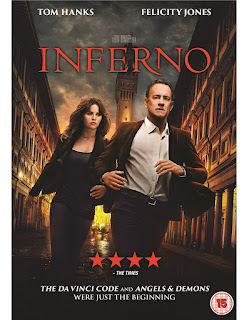 Steve Taylor-Bryant has a confession to make as he watches Inferno, out now on DVD...

Hi, my name is Steve and I am a Dan Brown fan. It has been 27 seconds since my last confession.

I am though, I can't help it. The books are pretend intelligent like me, you know, sounding more knowledgeable than they actually are, but I'm hooked on them. The films are easy to make, because Brown writes cinematic novels not great opuses of literature, and even filming the books out of order doesn't really matter when you watch them. They are safe films. They are gorgeous to look at without being too taxing on the brain matter. They have Tom Hanks in them and he doesn't make shit movies. Inferno is so far the best of the films.

This latest in the series of films finds Dan Brown's famous symbologist Robert Langdon (again played by Tom Hanks) on a trail of clues tied to the great Dante himself. When Langdon wakes up in an Italian hospital, after being wounded by a bullet that grazed his head and suffering from amnesia, he tries to piece together the events of the last few days with just daydreams and nightmarish visions to guide him and teams up with Sienna Brooks (Felicity Jones), a doctor he hopes will help him recover his memories. The safety of the hospital is short-lived as there is a violent attempt to locate him and retrieve a hi-tech, fingerprint-locked container that links Langdon to Bertrand Zobrist, a billionaire biomedical engineer with a drastic vision for a better world inspired by Dante Alighieri's Inferno. However Zobrist has also been hunted down and is now dead. Together with Doctor Brooks, Langdon races across Europe and against the clock to stop a madman from unleashing a global virus that would wipe out half of the world's population.

Ron Howard's ability to put a story on screen in a beautiful way is astonishing especially when it comes to something like Dante's Divine Comedy which is pretty horrific. As with all Brown books the mix of new with the ancient is balanced well and this comes across on screen really well with the locations such as Florence mixing with fingerprint recognition technology, but as always it's the casting that works. Hanks as Robert Langdon is endlessly watchable. The slight cheesiness of the character on the page disappears when Tom Hanks hears 'action'. In much the same way as the Indiana Jones films, though, you can't take them seriously. Archaeological professors don't charge around the globe fighting Nazis and symbology experts don't leave a safe university to fight a world ending plague. Once you can grab that fact the films are enjoyable.

Whilst I indeed understand why they aren't making The Lost Symbol yet, it's too National Treasure despite being the best book, I loved Inferno the film much more than the source material. It's Howard and Hanks, some half decent writing and some wonderful locations. If you don't like that combination then I'm not sure you know how to just chill out.