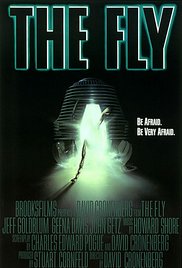 Our small band of Gunters here in The DreamCage universe are reviewing every film mentioned in Ernest Cline's Ready Player One. This week Susan Omand gets a real buzz from The Fly...

“You get it, all right. You just can’t handle it.”

My god, David Cronenberg is good at body horror isn’t he? The Fly is his 1986 vision of author/journalist George Langelaan’s 1957 short story of the same name and it was every bit as good as I remember it when it first came out.

For those of you that don’t know the story, journalist Veronica Quaife (Geena Davis) has been sent to a research institute event by her ex-boyfriend/editor boss Stathis Borans (John Getz) to try and scoop a story for Particle magazine. She meets a scientist, Seth Brundle, who claims to have an invention that will “change the world” and invites Veronica back to his lab/apartment to see for herself. There, he shows off his world-changing computer controlled prototype teleportation devices by teleporting a piece of clothing from one pod to the other and, ever the newshound, Veronica records the whole conversation, much to Brundle’s annoyance. She plays the tape to her boss the next day but he doesn’t believe that it is not a magician's trick. Brundle comes to see Veronica at work and is relieved that the story isn’t going to hit the papers yet because “it isn’t ready” as the teleporter will only work on inanimate objects. He offers her the job of chronicling his progress for a book, if she will wait to publish until the device works properly. Veronica spends a lot of time at Brundle’s place and they slowly iron out the problems with the transporter – problems like turning a baboon inside out in the transportation process. Even so, Veronica is very attracted to Brundle and seduces him and, as they have sex, she makes a comment about "the flesh" driving women crazy which inspires Brundle to reprogram the computer to “understand the flesh” better. It works and a second baboon comes through unscathed. As they celebrate with champagne, Veronica finds a package from editor Borans. Inside is a magazine cover showing Brundle and making his discovery front page news. She goes off to the office to confront Borans and stop him publishing but Brundle puts 2 and 2 together to make 5, thinking that Veronica and Borans are still together, and, in a very drunken state, decides to teleport himself as a way to spite Veronica by making her miss out on the Grand Finale of his experiment. He sets a timer on the computer and gets into one of the teleport pods. However, a fly gets trapped in the teleportation device with him...

OK, so the tech and the fashion immediately date this film but get over that and this is science fiction at its finest – plausible, beautifully observed and truly horrifying in its possibilities. Not only do we have the objectivity of a scientist trying to discover what has gone wrong and why he is changing, keeping the bits that fall off/out of himself in the bathroom cabinet as specimens, we have the whole “reversal of Beauty and the Beast” emotional interplay between Brundle and Veronica. Yes, Geena Davis is good but, to be honest, it could have been anyone on the screen as Veronica, as the absolute star of The Fly is, and always has been, Jeff Goldblum. He is just perfect in this, there is always something other-worldly about him anyway and he makes the role his own. I can’t take my eyes off him when he is on screen and watching his character’s physical and mental degeneration is awe-inspiring. He goes from confident and objective to obnoxious and spiteful to vulnerable and caring and makes every single emotion believable. Couple this with Cronenberg’s genius, there is no other word for it, at making the most detailed body horror look beautiful and a score by Howard Shore that never overpowers but just adds subliminally to the atmosphere and you have a classic film that is so much more than just an 80’s horror sci-fi flick. Revisit it and, as the most quoted line in the film says, “Be afraid. Be very afraid.”