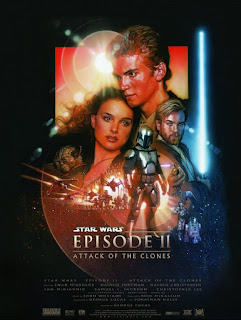 Our small band of Gunters here in The DreamCage universe are reviewing every film mentioned in Ernest Cline's Ready Player One. This week, David Ames gets an attack of the clones...


Today’s review is probably going to be the roughest of all the Star Wars Reviews I have done so far. Episode 2 is easily my least favorite of the Star Wars franchise for multiple reasons. As I said last time, I still really enjoy this film but it is definitely the bottom in terms of the hexalogy. Star Wars: Episode 2: Attack of the Clones was the first Star Wars movie I was able to see in the theaters. At the time, it was beautiful and funny and the CGI was incredible. Honestly, despite all of the flaws and the dependence on computer imaging, I love the graphics of the entire franchise. I know that Lucas is lambasted for the amount of special effects but I don’t care—it brings the universe to life and that is all I need.

Episode 2 begins ten years after the events of Star Wars: Episode 1: The Phantom Menace. Anakin Skywalker (Hayden Christensen), now being trained full-time by Obi-Wan Kenobi (Ewan McGregor), is an older, more mature (debatable) fighter, who has been harboring a major jones for Padme Amidala (Natalie Portman) for the past decade. Now that he is older, he proceeds to break multiple Jedi codes and foster a relationship with the ex-queen, now senator of Naboo.

As the film unfolds, there is discovered a plot to kill the senator and as Obi-Wan investigates, we are treated to a host of amazing worlds and characters. Also, the audience is given its first glimpse of a young Boba Fett and his father, Jango Fett. Any fans of the Clone Wars Animated Series will enjoy a peak into the creation of the clone army. Through a series of events, investigations, and a hilarious, poorly acted love montage between Anakin and Padme, the main characters all wind up on Geonosis, a rocky desert planet where the battle droids of the federation army are being manufactured. There they are thrown into a coliseum and forced to battle creatures in a very Star Warsian manner. After a rescue party consisting of both Clones and numerous Jedi appear to help save the trio, we are treated to a battle between Sith Lord Darth Tyranus, also known as Count Dooku (Christopher Lee) and Obi-Wan and Anakin. Also, we are finally given our first taste of Yoda fighting with a lightsaber and it does not disappoint.

The film ends with a first glimpse at the plans for the Death Star as well as Anakin receiving a robotic arm to replace the one Dooku separated him from earlier, adding a lovely parallel between Star Wars: Episode 5: The Empire Strikes Back. The film ends with a secret wedding on Naboo between Anakin and Padme.

Okay, now that the plot is roughly sketched out, let’s talk about the film as a whole. As I stated earlier, I actually really enjoy all of the cgi in this film, especially in the coliseum scene. The universe created by the special effects is amazing and includes interactive characters, large mass population scenes, and amazing planetary systems. I can’t really argue with that aspect of the film.

Another aspect of the film that I truly enjoy is the view into the everyday lives of Jedi. Before this, we didn’t really have a grasp of what Jedi did daily, at least in the cinematic universe, but here we get to see Obi-Wan and Anakin act as detectives and this added an almost film noir aspect to the movie. Their protection detail and their pursuit of subjects was not only welcomed and enjoyable, it also helped to develop their characters and build their relationship with one another.

The battle between Dooku and Yoda was amazing and so very entertaining. I had been waiting for years to see Yoda in action and watching him flip this way and that, utilizing the force with ease, and handling a Sith lord was so much fun. I cheered and to this day, I still do.

Now onto the negatives. Really, they all focus around one aspect: Hayden Christensen. He isn’t inherently a bad actor and honestly, in movies like Life as a House he is incredible. That is why this film was so disappointing for me. As hard as it is to pull off, he is both flat AND overly dramatic and it bleeds through the screen with poorly delivered lines and countless grimaces. Actually, I will go so far as to say that the script is a majority of my issues with Christensen’s portrayal. Also, knowing that he will become Darth Vader eventually really hurts when all Christensen can seem to do is cry and seethe. When he kills the entire village of Sand People, he cries the entire time and we really see the imperfections in his performance. Also, we all know that Padme is his wife so the stretching out of their love story is frustrating at best, especially considering that it is also done so poorly.

Overall, I absolutely love this movie because it is Star Wars and that is honestly all I really need. It has its flaws but I don’t care because overall, the worst Star Wars is still pretty solid in my book. Tune in and enjoy the visual feat that Lucas has designed to help build his universe. Gloss over the cheesy over-the-top performance of Hayden Christensen and you will be pleasantly surprised with the work. Remember, at the end of the day, all we really want is to enjoy ourselves and watch some damn lightsaber battles. This film delivers that in spades.