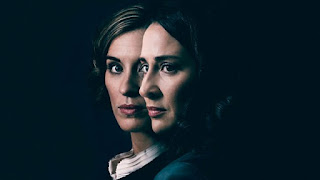 A new psychological thriller from the mind of Joe Ahearne heads to BBC One...

Morven Christie (The A Word) and Vicky McClure (Line of Duty) star in The Replacement, a three-part psychological thriller set in Glasgow which follows the paranoia of a woman who sees her identity being dismantled and can't work out whether the cause is another woman or her own baby.

When Ellen (Christie), a successful architect in her mid-thirties, becomes pregnant, she finds maternity cover in Paula (McClure): brilliant, enthusiastic and raring to go. Ellen wants to champion her, but something’s not right. Ellen begins to fear for her safety when she suspects her replacement has a disturbing agenda. Can her suspicions be explained away as female rivalry and her own insecurity of opting out of work at the top of her game… or do they speak to something deeper?

Joe Ahearne had this to say about his inspiration for The Replacement, "I like stories about paranoia where our main character is the only one who can see what's going on while everyone around them thinks they're going crazy. This type of story gives you the opportunity to photograph a character thinking not just talking and makes for much more visual and compelling drama.

"Someone going on maternity leave and having to deal with a temporary replacement seemed like a great way to explore this emotion. She watches what's going on around her and sees evidence everywhere she looks that she's being undermined. Everyone can identify with the anxiety of seeing someone do their job as good or better than you can. The pang when a colleague invites another colleague for lunch and doesn't tell you. Most of us have the secret fear that we're not good enough and feel envy when we see others navigating professional and social situations more suavely than we think we can manage.

"The Replacement turns that up to 11. The fact it's a pregnant woman going through this intensifies the dilemma. Women get attacked from every side when they make decisions about how to manage the change in their life. Whatever decision they make is challenged and dissected. It's the perfect landscape for paranoia and suspense."

The Replacement is produced by Nicole Cauverien and executive produced by Andy Harries and Suzanne Mackie for Left Bank Pictures, and Matthew Read for BBC One.