Book - All The Devils Are Here 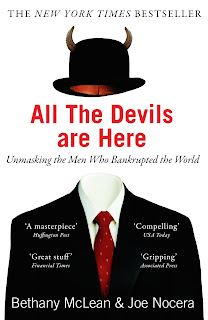 We love non-fiction here at The DreamCage. This time the devil is in the detail as Steve Taylor-Bryant reads All The Devils Are Here: Unmasking the Men Who Bankrupted the World...

I'm not sure how many of you know exactly what and who was responsible for the worldwide recession a few years ago, I'm not sure many of you care. I care though. Things like this make me angry, they make want to know every minute detail of what went on. Was there something I could have done? Was it something I participated in either knowingly or by default somehow? Mostly, though, I want a face to be put on what is usually a faceless crime and, with All The Devils Are Here, I get many faces, the details I need and, whilst my anger doesn't subside, I now know the how's and whys and, surprise surprise, the word 'greed' makes its presence felt.

I first discovered the depths of corruption in American corporations by reading The Smartest Guys in the Room about the collapse of Enron, that book was so incredibly well written that I wanted to read more by the journalist who had co-authored it, Bethany McLean, which is why The Devils Are Here was next up.

I got what I expected which was a flawlessly researched, very well communicated book. I've read many a take on how and why the global recession was footed in the American subprime mortgage crisis but never before were the actual companies and their main players laid out before me like this. The role of government and its lack of regulation and oversight gets explained in terms a layman can understand, the way Wall Street wrapped up dangerous loans within good finance packages for profit is easily followed, the fear, cuts, and general stupidity in credit rating agencies is there on the page for all to see and wonder how the hell it was allowed to happen, and those companies that bet against other companies and the fall off banks and institutions, the trillions of dollars in bail outs, and the knock on effect world wide is written, in plain English, with blame attached. From the underprivileged American man on the street with poor financial management and no prospects being offered a holiday home in Florida he can't afford, through government, through Wall Street, to no one having any money is quite a journey to take but if you have one iota of interest in the way the world works then it's a journey worth taking.

My initial reaction to McLean's book is that very smart people are often blinded into doing very stupid things, but I don't think it's that simple.  The title of the book is a nod to a line in Shakespeare's The Tempest (“Hell is empty, and all the devils are here”) but this was more than a storm in a teacup. Many of the political cast and the finance 'experts' believed in the system, fought the extra regulation that was proposed and, in their mission to earn big, they destroyed the lives of millions. That rings to me of purpose, not stupidly following a flawed program. Whatever your feeling once you've read it everyone you want to blame is named and shamed, just unfortunately not imprisoned.

Of all the books I've read on financial issues over the years never before has something so complex been explained in such a way that it's made to seem simple. The stunning amount of Detective work that must have gone into this book makes it one of the best available on the subject. A must read for those interested, those angry, and the generation that will grow up to hopefully fix this issue.