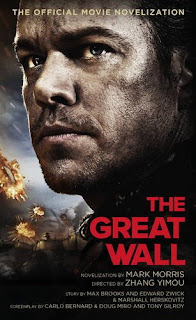 Susan Omand is eastbound (but not down) as she reads the novelisation of the film The Great Wall, thanks to Titan Books...

When a mercenary warrior (Matt Damon) is imprisoned within The Great Wall, he discovers the mystery behind one of the greatest wonders of our world. As wave after wave of marauding beasts besiege the massive structure, his quest for fortune turns into a journey toward heroism as he joins a huge army of elite warriors to confront this unimaginable and seemingly unstoppable force.

Film novelisations can be tricky things. Often the visual aspects do not translate well from the screen to the printed page and the plot is not strong enough to work on its own without that. Neither of these is the case here.

What a fantastic story! I have to be honest, I haven’t watched the film, I only know what I’ve seen on the trailers so I can’t attest to how close the novel is to the film’s plot but, as a book, it works incredibly well. It’s not deep and meaningful by any means but it certainly is action and adventure all the way and kept me reading over three nights, so there are no concerns about there not being enough in the story for the novel to stand on his own.

I will admit that the character development is minimal but, to be honest, that’s not important here, both because it’s definitely action driven rather than character driven and because, being a film novelisation, you don’t actually need a complex back story to the character for things happening in the “now.” There is more than enough in the book to allow you to can identify and empathise with the characters' reactions to what is happening around them and that is enough for me. The dialogue is also snappy, there’s a lot of humour in it, the internal logic works well and there’s plenty of action and explosions to make up for the lack of depth.

One thing that came across really well in the writing by Mark Morris, despite my previous concerns, was the visuals. It is written in such a way that it’s very easy to picture the action unfolding . The description of the intricate workings of the mechanicals in the wall and the science behind the controlling of the beasts were fascinating, it really made me want to see the film, and the epicness (yes, it’s a word) of scale is truly evident, especially as the hordes of monsters appeared out of the mist.

So a highly recommended read but one that needs expectations managed, I guess much like the film itself. If you are expecting historical high fantasy sagas on a level with Crouching Spider, Hidden Wardrobe (no, I didn’t like that film) then you are going to be disappointed but if, like me, you want it to be Indiana Jones and the Great Wall of China then you are going to love it.