Project: RPO - Revenge of the Nerds 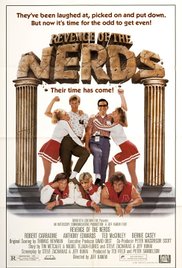 Our small band of Gunters here in The DreamCage universe are reviewing every film mentioned in Ernest Cline's Ready Player One. This week Susan Omand seeks The Revenge of the Nerds...

From the Iceman last week to Goose this week, I seem to be working my way through the previous films of the Top Gun alumni. Yes it’s Goose, Anthony Edwards, who takes one of the lead roles in the 1984 film Revenge of the Nerds as Gilbert, alongside Robert Carradine (one of the acting dynasty of Carradines) as Lewis. And that’s not the only coincidental tie-in to Real Genius as Michelle Meyrink plays the geeky love interest in both too. I must admit, though, that I had never heard of Revenge of the Nerds before I listened to the recent Was This Always Weird podcast on it so I didn’t know quite what to expect.

OK no, that’s not strictly true because I’ve seen SO many films that fit the same mould of a gang of nerdy college kids getting beaten on before getting the better of the football playing fraternity (oops, spoilers, as if the title Revenge of the Nerds didn’t give that away anyway) that I knew EXACTLY what to expect and it delivered. I must admit too that this was one of the better ones of those type of films, ranking up there with Porky’s, Animal House and even, dare I say it, the first American Pie (well I found it funny, the first time).

I mean yes, Revenge of the Nerds played the stereotype card for everyone in the “nerd” group, with techie, speccie, mummy’s boy, hyper intelligent juvie, token foreign student, token gay, token girl and the weird one that should have been cool but isn’t. But this was the 80s and, much as they’d like us to believe otherwise, nerds were still just a gang of misfits who banded together in an attempt to get safety in numbers in establishments like school or college. Nope, being a nerd in the 80s wasn’t a good thing to be.

And, yes, the story was somewhat predictable, with the “good guys” winning out in the end and everyone banding together and showing solidarity (which, by the way, never happened in real life). And the acting wasn’t quite as good as it could have been, in fact it was decidedly ropey in bits, with the exception of the sublime John Goodman, who played Coach like he was born to the role.

But what the hell, it’s a fun movie as long as you can see past the sheer lack of political correctness and just enjoy the stupid slapstick jokes, nudity and swearing. We shouldn't over-analyse or criticise it because, let’s face it, not everything we watch needs to be cerebrally challenging... does it, nerd?