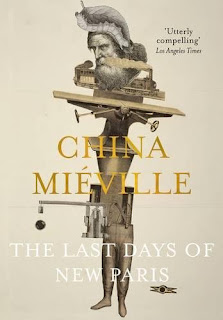 With alternative history becoming the new norm, Marc Nash heads for alt-France and reads The Last Days of New Paris by China Miéville...

Arggggggghhhhh! Mieville does it again. A work abounding in fantastic ideas, delivered in a largely prosaic and unengaging manner.

In an alternative universe, World War 2 continues into the 1950s, as the Nazis in alliance with Hell's minions (though the devils don't always obey orders), are locked in battle against the Surrealists and particularly actual manifestations of Surrealist creations on canvas and in print come to life as 'Manifs', after an 'S-Blast', 's' standing for surrealism.

Considering this is a book about war, there is a crushing lack of tension, nor do you feel the terror or horror of the casualties described. Instead you get descriptions of strange beings going at each other, where all the imagery is of visual description, but almost none of emotion-inducing metaphors. Nobody dies in any meaningful sense, nor do you much care for the fate of the two main protagonists as they march from one description heavy encounter to the next. The novella is without any variation, any emotional modulation at all, all at the same pitch. There is no interiority, no depth to the characters, which I think is a recurring fault of Mieville's, though he can do it in some cases such as "Embassytown".

There are some good little setpieces, such as how the 'S-Blast' came about, or the deck of cards reformulated by the Surrealists brought to life and to be played like jokers (think Aleister Crowley's reworking of the Tarot deck in the name of 'Toth'). But again it's this lack of depth behind the ideas that lets it down. We get interesting echoes of the weapons race as Hitler pinned his hopes on rocket technology turning the tide in the Nazis' favour, but here the weapons are just hung out there as descriptive rather than any metaphorical 'race' - the first major weapon pops up, is defeated, inaugurates the coming of the second. greater weapon, but then that is defeated and we can all go home again as there is nothing more. There could have been more about how a dreamlike, otherworldly imagery such as Surrealism comes to do battle with a narrow-mined, literalist mindset of Nazism that would denounce it as degenerate and decadent art, but it's barely in there between the lines. And then there's the baffling afterword from the author that explains how he came to be in possession of the story from the protagonist who he came to meet in mysterious circumstances as if this protagonist had really lived the events of the book. I have no idea quite what impression this afterword is supposed to convey and how it is supposed to alter our conception of what we have just read, unlike say the final few pages of "Life of Pi" which - whether you bought into it or not - completely turns around all the previous text and spins it in a new direction of fictional reality.

And finally, this novella is dubbed "New Weird" which is a sub-genre label we really don't need. Paintings and art works that come to life aren't weird to me when I have some knowledge of what those Surrealist artworks & images are in the first place. It adds nothing to the work to call it New Weird.

His own books are available from Amazon here.