Doctor Who – The Abominable Snowmen 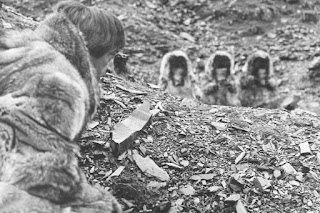 Our Doctor Who expert, Tony Cross, is journeying through all of time and space to bring us his thoughts on every available Doctor story. Today is the Second Doctor adventure The Abominable Snowmen...

The Abominable Snowmen is one of those stories I think is hard to judge only on audio or reconstruction. It has enjoyable moments, including some of my favourite Second Doctor lines, but it is two episodes too long and has that annoying 'people don't trust the TARDIS crew, then they don and then they don't again' plot threads that are effectively just an excuse to pad out the action for an episode.

The TARDIS lands in Wales...sorry The Himalayas...and it turns out that they dropped down near a Monastery where the Doctor once dropped in before. That time he took away the Monastery's holy bell for protection. This gives him the perfect opportunity to drop it back. Unfortunately, he's arrived at the same time as the Monastery is under siege by the Yeti. Obviously, the Doctor walks smack bang into this situation and gets blamed for everything, including the murder of an English explorer by Professor Travers (Jack Watling). The Warrior Monk Khrisong (Norman Jones) decides to bait a trap with the Doctor. If The Doctor dies, he dies but if the Yeti let him go then he's guilty. A sort of dry version of chucking a witch into the river to see if she drowns.

By the time everything is cleared up it is clear that something strange is afoot. The 'real' Yeti are shy creatures. It turns out the ones attacking the monastery are something else altogether. They are something artificial.

Then there's the mystery Master, Padmasambhava (Wolfe Morris) who lurks about hypnotising the Abbott Songsten (Charles Morgan). Wolfe Morris does a fantastic job of Padmasambhava. There's something of the Gollum in his performance. Or there would be if Gollum came before Padmasambhava. Padmasambhava is not quite the villain of the piece. He's been taken over by The Great Intelligence, which is just a mind floating about the universe. It seems to want corporeal identity and power, which makes me wonder why it doesn't build itself a robot to bung its consciousness in so it can get on with its plans without having to operate through second-hand minds.

The reconstruction I was watching makes Padmasambhava's make-up job look a little shoddy at points but it is hard to tell in reality. Padmasambhava is supposed to be 300+ years old by this time. Kept alive by the Great Intelligence. Indeed, Padmasambhava's death is one of those occasional death's that crop up in Doctor Who where it truly is a release.

Gradually the whole plot is revealed. The Yeti attack but mainly in a bundling Big Daddy kind of way rather than in a wholly terrifying manner. Indeed, part of the problem with this story is that the Yeti are just too damn cute. Big, cuddly fur balls. Like Chewbacca's been eating a lot of pies. They wobbly along looking not at all threatening, whilst the genuine Doctor Who creep factor comes via Wolfe Morris's vocal performance and one or two moments - like Professor Travers flight from the cave - which feel genuinely scary.

Once more Troughton is fabulous. Once more Frazer Hines is excellent. Deborah Watling too is good here, although there is a point - when Thomni (David Spenser) tells her not to do something - where she behaves like a spoiled colonialist child that I felt rather uncomfortable with. She's disturbing though in Part Five when she's hypnotized and trying to get the Doctor to leave the Monastery.

This mention of colonialism brings me on to another unfortunate part of this story, which is all the 'yellow-face' on display. A brief scan of the actor's names above shows a distinct lack of Indian or Tibetan actors. David Spenser was born in Sri Lanka but everyone else is as white British as can be so there's a lot of eye make-up and uncomfortable accent work (which not everyone adopts.) Norman Jones is one of my favourite Doctor Who guest stars but he is a long way from being Tibetan. It's easier to ignore when listening to the soundtrack but if this was to come back into the archive the 'yellow-face' would become obvious and perhaps a little uncomfortable. Yes, I'm sure finding a cast of Tibetan-Chinese-Indian actors might have been difficult in 1967 but you often get the impression that no one even bothered to try. People often mention this issue with The Talons of Weng-Chiang but it doesn't come up often in discussions of this story. I suspect that is because it doesn't exist in its entirety in the archive.

It's also Doctor Who's first introduction to Buddhism, which may crop up again when Barry Letts gets going. But it is interesting that the Doctor takes it seriously enough. Not perhaps as a religion but as a mental control technique. There's no mockery of Buddhism here, even if some of the Monks aren't the brightest of sparks.

So, it's an OK story but it could have been shorter. It introduces us to The Great Intelligence who will crop up again soon and also - eventually - makes an appearance in New Doctor Who, starting with The Snowmen. The implication of The Snowmen is that it is the Doctor's own silliness that gives the Great Intelligence its idea for something that is coming up. Ah, that timey-wimey Mr. Moffat.

Definitely, one I'd like to see on video though to make a proper judgement.