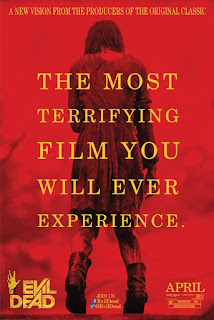 Sam Raimi's horror classics Evil Dead and Evil Dead 2 are two of my favourite horror films. Made on a shoe string budget, they catapulted both Raimi and, long time college friend, Bruce Campbell into the public awareness. That's not entirely true actually, because the original Evil Dead certainly didn't break box office records. Once again we can thank our friends at the various film boards for giving Raimi's masterpiece the kudos it deserved. I've long felt that if a film is banned it achieves a certain notoriety which gets it a wider audience. Whilst this doesn't necessary guarantee the films any good, some of the films were banned because they were awful and tasteless, cult followings spring up. Indeed, Evil Dead has the honour of being one of the first films to be labelled a "video nasty" and joining the ranks with The Driller Killer and others.

For me personally, Evil Dead and its first sequel represent the continuation of my love affair with horror films. I grew up watching late night showings of Hammer classics and Freddie was never too far away from my video recorder. I bought my first copy of Evil Dead on VHS and it was still heavily censored (the now infamous "tree rape" sequence was severely cut as were various other parts.) Still this film still has the ability to shock and enthral and its thanks to the ingenuity of cast and crew, working on a minuscule budget of $150,000, they pulled together what is now seen as one of the most effective horror films of its day. Raimi, Campbell and Robert Tapert (also studying with Raimi) approached investors themselves and convinced people they knew what they were doing, even though they had very little knowledge of the film industry. Originally filmed on 16mm film with a Super 8 camera they wanted their film to look low budget and gritty. Its that grittiness and raw feel that makes Evil Dead so effective even and perhaps especially when compared to the more varnished and glossy horror films of today. With the budget for Evil Dead finally coming in at $375,000 Raimi had succeeded in what he had set out to do. To produce and independent horror film, with little or no previous experience and with minimal backing.

When watching Evil Dead and Evil Dead 2 now the effects, particularly the possession sequences still look impressive. No CGI yet they still achieve beheadings, gouging and copious blood letting. There is an overwhelming atmosphere of evil which kind of reaches out of the television and grabs you by the throat. Whilst Evil Dead 2 has more humour surrounding the demonic events and Ash (Campbell's is certainly more tongue in cheek) it still shocks. When will people learn that opening books "bound in human skin and inked in blood" is never a great way to reach old age. You certainly don't recite passages from said book especially, especially if they claim to raise the demons that inhabit the forest. The original Evil Dead trilogy (Army of Darkness was added in 1992) told the tale of our hero Ash (Campbell) and his battle with the evil deadites.

Many unofficial sequels have been mentioned. I'd still like to see Ash vs Freddy vs Jason but I doubt that will happen. However, when it was officially announced with Raimi and Campbell's vocal backing a "reboot" was to be released I shuddered. I wasn't alone. Whilst it was a good sign that the film had the backing of the original team, it still bothered me that Evil Dead was going to be rebooted. Why does it need it? Evil Dead is still and will always be a classic horror film. The story is well told and well acted. It didn't need messing with. I'm always one to to view a film first before finally deciding my thoughts and certainly the interviews and stills from the films shoot looked promising. It impressed me that Alvarez wanted to film The Evil Dead (2013) with no CGI and use the same sort of effects as the original. So this wasn't going to be a glossy Hollywood remake. The reboot, and Alvarez was most insistent it wasn't a remake, was to continue the series. So it was with much trepidation that I took my seat at my local cinema. I really wanted to like it, I really did.

Nearly two hours later and I leave the cinema, angry, disappointed, no, actually, mostly furious. It just didn't work. I had wasted 2 hours of my life that I'd never see again. They had messed with one of my favourite films. I want to explain why I hate The Evil Dead "reboot".

In order to write a great horror film or indeed any film I think you need at least two things. An engaging and great story and believable characters that you develop feelings for. For the "heroes" this means you should care if they live or die. For the "villains" that they are foiled or at least diverted. Now I know with horror films this is sometimes subverted. I love horror when the demon wins or when the good guys are totally wiped out. But I care what happens, I care about how it happens. I care! With the original Evil Dead, Raimi is successful in achieving this. The car ride to the cabin is jovial and you get to know a little about the main characters, their strengths and their weaknesses. Ash is a wonderful character and one instantly feels a rapport with him. Therefore when he is thrown into a world of demonic possession and those he cares about lose their lives and their souls it matters. With the remake I just didn't give a shit about them. Mia's drug addiction (really?) she doesn't have enough character development for me to care. David (her brother) Natalie, Eric and Olivia all have similar problems. Too little time is spent on them and their relationships together. This is the problem when you introduce a drug rehab subplot as the reason for escape to the cabin. A note on that, if you had a drug addicted sister would you really make them go to a cabin in the middle of nowhere to detox? really? Its just not done in a believable way. The characters themselves are not likeable so when they start to be possessed I simply couldn't care less. Whilst its true the possession sequences are impressive and the deaths are well staged its not enough to carry the film.

Gore for gore's sake does not a good horror film make. There are elements of the original Evil Dead that remain. The cabin in the woods, the finding of the Necronomicon and the tree rape have all been carried across. Unfortunately, gone is the atmosphere of evil and the gritty realism. It's too slick, too knowing, too shit. The inclusion of an apocalyptic sub plot of their deaths being prophesied and bringing about the rise of "the abomination" (yeah its really called that) from hell, killed the film for me oh and the stupid rain of blood. The horror of Evil Dead is that humans are possessed just because the demons are awakened. No further explanation, no attempt to bring about the end of the world. You awake a demon its pissed off and you are gonna be possessed. The hatred of all human life is horrific and to have that explained into a flimsy sub plot reduces this film to "just another save the world from demon hordes affair" Evil Dead (2013) fails because it doesn't have believable characters and it doesn't have a great story to tell. The final straw for me was the appearance of Campbell as "old Ash" if I were good old Bruce I would have kept well away from this fetid pile of dingo's kidneys. What do I know though, it grossed $17,000,000 at the box office. Because every film that's considered a box office hit is a great film. Isn't it?