Doctor Who – The Faceless Ones 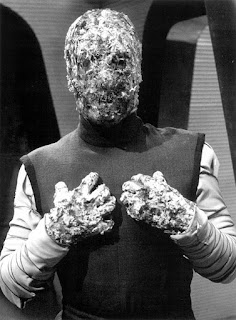 Our Doctor Who expert, Tony Cross, is journeying through all of time and space to bring us his thoughts on every available Doctor story. Today is the Second Doctor adventure The Faceless Ones...


The Faceless Ones is rather good. It's probably a tad too long but that's probably true of a lot of Doctor Who stories. It ends with companions departing having hardly appeared in the story as a whole, which makes it feel like Ben and Polly carried the 'Curse of Dodo' with them from The War Machines.

It's also got a shockingly low body count. The Doctor gets to be the Doctor by finding another way to solve the conflict between the nameless aliens - let's call them Chameleons - and humanity, although it does involve a rather nasty bit of blackmail.

The setting is Gatwick Airport, which is different. The Doctor and companions land the TARDIS in the middle of one of the runways, flee the trouble they may have caused. Then Polly witnesses a murder, which is just the beginning. The Doctor's investigations unravel a people smuggling operation with a twist despite him being on the run for a while, then convincing (sort of) The Commandant (Colin Gordon) and Inspector Crossland (Bernard Kay). In the early episodes, the Doctor is in the 'looks and talks like a mad man' mode. Especially as 'The Chameleons' run rings around him.

They grab Polly and then Ben. But fortunately, the Doctor still has Jamie and is also assisted by Samantha Briggs (Pauline Collins) a Liverpudlian woman who has come searching for her missing brother and gets caught up in the Doctor's investigations. She turns out to be fine possible companion material but Pauline Collins - probably wisely - turned down the opportunity to take the job. She's great though in this story and is again when she pops up in Tooth & Claw almost 30 years later as Queen Victoria.

This story is packed with actors who will pop up in more than one Doctor Who story. Donald Pickering plays Captain Blade and Wanda Ventham Jean Rock, the Commandant's PA. They'll crop up together again in Time and the Rani but they're at their most gorgeous here. Donald Pickering had already appeared in The Keys of Marinus and Wanda Ventham will also appear in Image of the Fendhal

Then Chris Tranchell, who'd only recently is cropped up in The Massacre but is probably best known in Doctor Who circles as Commander Andred in The Invasion of Time the man who captured Leela's heart in one of Doctor Who's least convincing companion exits.

Finally, there's the great Bernard Kay who has three other Doctor Who appearances to his credit: The Dalek Invasion of Earth, The Crusade, and Colony in Space. He's one of the great British character actors and there's a lovely moment when Inspector Crossland is on board a Chameleon Airlines flight, whose passengers are all young people and he finds himself about to start smoking his pipe. It's a masterclass in awkwardness.

I've dwelt on the actors a lot because the performances really make this story I think. Donald Pickering is delicious as Captain Blade, who sounds like he's been captured from an ITC television series of his own and feels like a genuine threat. Colin Gordon's Commandant also does a fine job of official bamboozlement before coming around and becoming officially quite the cold-hearted negotiator. You get the impression the Commandant comes with an impressive war record in Bomber Command because despite his confusion he's not an idiot.

This all helps Troughton raise his game even more. I think you're all going to get tired of my constant praise of the Great and Glorious Patrick Troughton but he's never more brilliant than in the final episode of this story: mischievous, courageous, ruthless, devious, and compassionate. He doesn't want to destroy the Chameleons but nor is he prepared to let them get away with their nasty little plan even if they have the best motives.

This is also the story where Jamie really sets up his place as the key Troughton companion. Both Ben and Polly are effectively sidelined so Jamie steps up to the plate. Frazer Hines is superb, especially when he gets to be the non-Jamie Jamie in the final episode. In the final episode as Jamie and the Doctor go off to look for the TARDIS, like Rick and Captain Renault at the end of Casablanca*, it seems to be the beginning of a beautiful friendship.

Basically, I loved The Faceless Ones. The villains are villainous but have a proper motivation. The Doctor has to be at his cleverest/most devious to win and it is packed full of fantastic actors doing sterling work. No one here is playing it for laughs or treating it as 'just Doctor Who'.

Alas only two of the six episodes exist in the archives. The other four required the use of reconstructions, which helped magnificently as usual. I think this is high on my list of stories I'd like someone to stumble upon in a Church basement or a West African television station.

*Casablanca is really a love story about Rick and Captain Renault. Possibly.