Doctor Who – The Evil of the Daleks 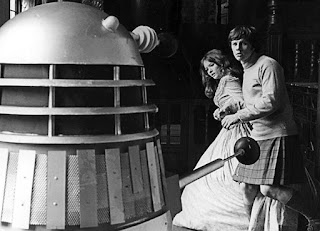 Our Doctor Who expert, Tony Cross, is journeying through all of time and space to bring us his thoughts on every available Doctor story. Today is the Second Doctor adventure The Evil of the Daleks...

The Evil of the Daleks ends Patrick Troughton's first season as The Doctor, which has been a pretty successful one for me. Troughton himself has been fantastic. I've enjoyed every story, including the unloved Underwater Menace. With Ben and Polly's departure, the last vestiges of the Hartnell era are gone. He begins this story with one companion, Jamie.

It picks up from the end of The Faceless Ones when the Doctor and Jamie try and find out what's happened to the TARDIS. It turns out that a lot is going to happen before they get back to it.

There's Bob Hall (Alec Ross) then Kennedy (Griffith Davies) and Perry (Geoffry Coleville) before we meet Edward Waterfield (John Bailey) a dealer in Victorian antiques who just happens to be an actual Victorian. Even then we're not done. For Waterfield, leads us via time machines and a Dalek, to Theodore Maxtible (Marius Goring) and to an explanation of his experiments with static electricity, mirrors and time travel.

The explanation of Maxtible's theory sounds more like magic than science but we'll let it pass at this point as it doesn't really matter. All we know is that the mention of 'static' causes the Doctor to look worried, which is unsurprising as that's pretty much the cue for the Daleks to make their appearance and explain their long, convoluted plan to get him to where they want him. I love The Evil of the Daleks but the Daleks do make this incredibly difficult for themselves. Daleks don't strike me as the sort of race that lays out riddles for people. They're more the sort of people that pop up and start exterminating whatever moves until they get want they want. It takes the deviousness of the Daleks in Power of the Daleks and adds an almost Master like need to complicate things.

It turns out the Daleks want the Doctor's help in identifying the 'human factor' and have set up an experiment, involving Jamie, to help. At this point, the Doctor gets manipulative as hell as he sets up Jamie, without telling him the whole truth. Jamie, who realises he's being manipulated throws a strop but does exactly what everyone expects him to do. It makes you feel quite sorry for Jamie and Frazer Hines does a stonking good job of conveying everything that's required of him. The Second Doctor is definitely more than capable of matching the Daleks for deviousness, which I like.

Maxtible and Waterfield are helping the Daleks because they've kidnapped Waterfield's daughter, Victoria (Deborah Watling), although it becomes pretty clear that Maxtible has his own agenda.

Marius Goring - who appears in one of my favourite films of all time: A Matter of Life & Death - is great as Maxtible, although he does edge towards the OTT as his plan and mind starts to unravel.

It's John Bailey as Waterfield who puts in the best of the guest star performances. Waterfield is afraid for his daughter but ashamed by what they are doing to save her. It's a wonderful performance.

I should also note that Maxtible has a Turkish servant, Kemel (played by Trinidadian actor Sonny Caldinez). Kemel is a muscular gentleman who job is to get Jamie but who then joins Jamie to rescue Victoria. Kemel is a large, mute black man. Unfortunately, the next story also features a large, mute black man and it begins to look like the production team can't cast black actors except as silent men. Kemel's a good man though and his fate annoyed me as much as that of Griffith's in Attack of the Cybermen. Basically, he dies because they can't be arsed to write an explanation of what they're going to do with him when he survives and that's mainly because Victoria is intended to join the cast as a new companion.

It's hard to judge Victoria/Deborah Watling at this point because it's her first story but she's charming if a little confused and scared, which is unsurprising. She's also conveniently reduced to the status of an almost friendless orphan by the end of this story so she can head off with the Doctor and Jamie without too much thought. It'll be interesting to see how her status plays out as we go forward.

The Daleks 'human factor' is imported into three test Daleks. It works. They're like little children and one of the things from this story that will live in my memory is Daleks crying out 'dizzy Daleks.' They return to Skaro when called, which I'm thinking is a bit of an oversight in the Daleks plan.

However, it turns out the 'human factor' was the blag. The Daleks actually wanted the Dalek factor, which they intend to sow throughout the history of the human race via a Dalekised Doctor and his TARDIS. The first victim is Maxtible. Then the Doctor but at this point, the Dalek's don't know the Doctor isn't human. They just think he is 'more than human' due to all his time travel. So the Doctor turns the turned tables on the Daleks.

This leads to a humanized Dalek v Dalek Daleks civil war and the destruction of the Daleks 'forever'. There's a moment where the Emperor Dalek - which is an impressive piece of design work - is trying to stop the Daleks fighting in front of him. It's the Dalek equivalent of 'Gentlemen! You can't fight in here. This is the War Room' from Dr. Strangelove.

It's a pretty bleak ending as the Doctor's friendly Daleks die in the fighting too. It would have been nice if they'd just packed up and done a runner really. Perhaps more human than a series of suicidal attacks. The Doctor keeps saying 'Don't do anything without questioning it' but basically uses the human factor Daleks as his army. Why are they fighting? To prevent their destruction by proper Daleks but why not simply flee. Take over some saucers and go off to fight another day?

I'm making this sound more snarky than necessary, which is unfair because The Evil of the Daleks is an excellent story. It might be a bit too long but as I said in the previous article that is a sin committed by many a Doctor Who story. It's got fab performances. Troughton, in particular, is amazing. There're a couple of great moments in particular: "What have you done with your infernal meddling!" (And the whole build up to it.) Then there is the lovely line, "I am not a student of human nature. I am a professor of a far wider academy of which human nature is merely a part."

So ignore my snarky snark snarking and go watch/listen to The Evil of the Daleks of which, alas, only a single episode survives in the archive. So either listen to the BBC CD or find a Reconstruction.