Doctor Who – Tomb of the Cybermen 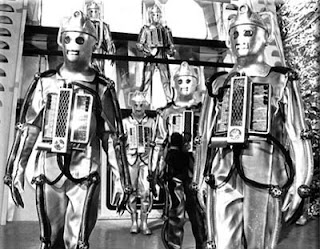 Our Doctor Who expert, Tony Cross, is journeying through all of time and space to bring us his thoughts on every available Doctor story. Today is the Second Doctor adventure Tomb of the Cybermen...

Here's a thing, I don't enjoy Tomb of the Cybermen as much as I used to. In fact, there are parts of it that really, really annoy me. But because I try to take a positive view of Doctor Who I will start with the good stuff.

First and most important Patrick Troughton is majestic in this story. He's devious, snarky and charming. He sees through Kaftan (Shirley Cooklin) and Klieg (George Pastell) immediately but - for reasons of his own - helps them explore the whole Tomb, which seems a dangerous thing to do. There are two of my favourite Troughton moments in this story: the lovely little chat with Victoria about family and memory and his drawing out of Klieg's insanity in the final episode. Basically, Troughton's the best thing in this.

Frazer Hines and Deborah Watling are also pretty damn good. Jamie and Victoria make a rather sweet partnership. I also like the fact that Victoria, who has just lost her father and spent a huge chunk of time being held hostage by Daleks, doesn't take any rubbish from anyone. Her snarky relationship with Captain Hooper (George Roubicek) is another little highlight of this story.

The rest of the supporting cast are also pretty good even if some of the accents are a little...dubious. This is the first appearance of Cyril Shapps, as Professor Viner, in Doctor Who. Shapps specialises in the highly strung and is always on edge in this story, which is a delight.

Then there's the design and atmosphere. The Tombs looks good, the Cybermen look good and we get a quarry as an alien landscape, which is very Doctor Who. The Cybermen seem to have gone in for graphic design and baffling logic in equal measure. Their own image is stamped all over the place like the logo of a particularly avaricious corporation, which isn't entirely inappropriate. They've also set up the whole Tomb as a bizarre trap to attract the intelligent. Their explanation for this odd activity is rather strange.

Indeed, none of this story makes much sense. The Doctor's actions are odd. Kaftan and Klieg are clearly so up to no good it is astonishing anyone agreed to travel to Telos with them. I wouldn't trust them on a bus. There's also the problem of Kaftan being a white actress 'browned up'. I'm not sure where Kaftan is supposed to be from. I'm assuming North Africa or the Middle-East but she's browned up. Why? Why not just change her name and have a white actress play white? Again, I'm not sure where Klieg is from. George Pastell himself was Greek Cypriot so at least he isn't coloured in.

Most importantly though Klieg and Kaftan are idiotic even by the standards of Doctor Who villains. It's obvious, once they appear, that the Cybermen are bloody dangerous and can't be trusted. They explicitly say that they're going to convert everyone into Cybermen but Kaftan and Klieg persist with their plan beyond the point of sanity. Now, I know Klieg is basically batshit crazy by the end but what's Kaftan's excuse? Also, people keep leaving guns lying around for them to pick up. Too many people in this story are too stupid for their own good. Obviously, Doctor Who stories would be less interesting if the villains behaved like sensible people, i.e. after Klieg's first encounter with the Cybermen he didn't say to Kaftan, "Look, we've made a mistake here. These things will not help us. They will kill us."

Then there's Toberman (Roy Stewart). Toberman is a muscular black man who is virtually silent throughout. No one clarifies his relationship with Kaftan - is he an employee? A guard? A slave? A lover? He's certainly distraught when Kaftan is killed. I'll admit, get a fabulous final scene. It just makes me uncomfortable but I am one of those tedious left-wing political correct types. Toberman is half-converted to being a Cyberman but has enough humanity in him to take the fight to the Cybermen once Kaftan dies. I think it's the way the Doctor talks to him like a child that I don't like. The fact that it follows on so rapidly after Kemel in The Evil of the Daleks doesn't help. It's as if black men are just strong, silent - or near silent.

However, as I said earlier Toberman's final scene does at least have a certain power and dignity to it that Kemel's arbitrary death didn't.

For some reason, all those things got under my skin on this watch. Things like the obvious strings and dummies, which non-Doctor Who fans often pick up on and laugh I can shrug off but the stupidity of Kaftan and Klieg plus the treatment of Toberman really annoys me.

I remember being so excited in 1991 when it was rediscovered. I rushed down to the WHSmiths in Lancaster to buy it on VHS. Yes, young people VHS* It was fabulous to get a whole new Patrick Troughton story from out of the ether. I remember there was some disappointment that it wasn't quite what people remembered but it is still a firm favourite.

I don't want you to think I hated it. There's enough good stuff to make it entertaining to watch: have I mentioned how brilliant Patrick Troughton is? But there are enough things that annoy me to have it be a story I'm less bothered about re-watching. 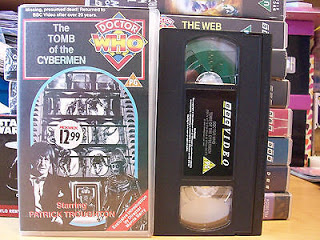