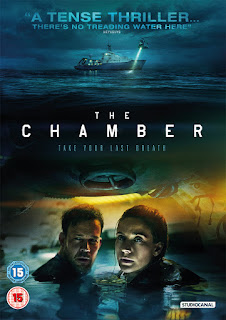 There's no treading water as Ren Zelen watches The Chamber, out in cinemas tomorrow...

Writer/director Ben Parker’s debut feature, The Chamber, is a claustrophobic, character-driven thriller. Although Welsh-made and Devon-filmed, the movie is set in North Korean waters.

The story concerns Swedish submersible pilot Mats (Johannes Kuhnke) who is woken one night and told by the captain of his ship that he has been conscripted into taking a trio of American covert ops-agents on a secret mission. He surmises that they are desperate to recover something from the ocean floor.

Without giving out spoilers, we can say that, unsurprisingly, the mission does not unfold smoothly - partly due to a decision to blow up the item on the ocean floor in order to keep it out of enemy hands.

Red is determined to follow her mission to the letter, ignoring Mats’s warning that setting off a bomb so near his ancient and delicate submarine is a very bad idea. In the event, the submersible is churned around in the blast, springs a leak and turns upside-down, blocking the only escape hatch.

Denholm is severely injured, and Parks soon begins to twitchily demonstrate signs of deep ocean pressure sickness (see Michael Biehn in The Abyss). Meanwhile, their surface support vessel has been boarded by the North Koreans because it has strayed into their waters, effectively leaving the group stranded on the seabed.

Mats has to use his comprehensive knowledge of his submarine, his experience and his ingenuity to cobble together a kind of ‘Heath-Robinson’-style solution to their plight, despite having only two escape suits for four people. 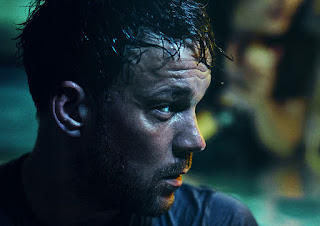 Keeping this premise exciting in such a limited location for the film’s 90-minute run-time is a challenge, and ultimately depends on the interplay between the four characters. As the situation becomes increasingly tense and hopeless, they inevitably begin to turn on each other.

Ben Parker manages to build a thriller entirely around heated arguments and the group running out of time, fighting for their lives. He utilizes tense dialogue and focussed performances. It all rips along at breakneck pace as the crew go from one catastrophe to another and find solutions to seemingly insurmountable problems. If it wasn’t so fast moving and gutsy, we might be inclined to notice that the escalations begin to feel a little contrived.

All in all, The Chamber proves to be a decent thriller, making use of its limited resources. The setting is made to feel even more confined as the camera keeps tight to the cast, even though it’s constantly in motion.

Apparently, the idea for the film came from Parker’s own fear of enclosed spaces, and he manages to instil a sense of claustrophobia and nervous energy. The cinematography also conveys this atmosphere - the sub is suffused with blue and grey hues, enhancing the undersea feel, and the sound effects and humming soundtrack are immersive (music by James Dean Bradfield).

Although the tight script does a reasonable job of building intrigue about the mission, the eventual reveal of what’s going on is clouded in military-speak jargon. The characters themselves feel rather archetypal, making one’s engagement with the film more intellectual than emotional.

The only exception may be Kuhnke (Force Majeure) who delivers a pivotal role as a sympathetic civilian who proves himself more resourceful than the military ‘experts’ bossing him around - which makes the denouement all the more tragic.

Follow Ren Zelen on Twitter @RenZelen
The Chamber is in Cinemas on 10th, DVD Digital on 20th